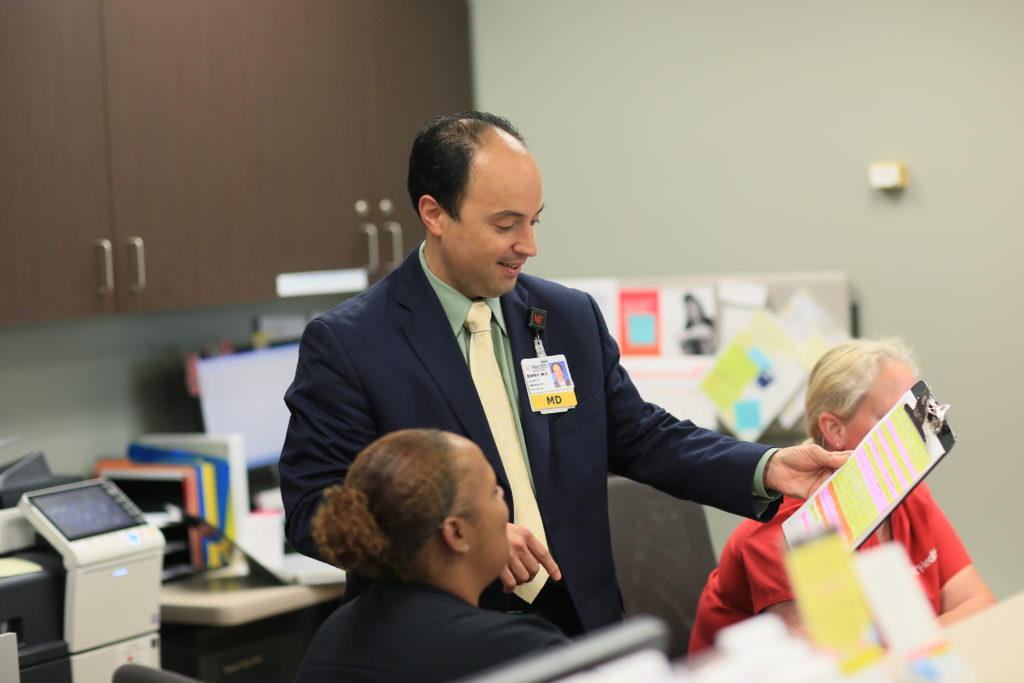 Movement disorders, like Parkinson’s and Huntington’s disease, are neurological conditions that cause abnormal voluntary or involuntary movement or reduced movement. This can include tremor, muscle spasm, balance, and problems with vision, swallowing or speech.

Click a topic below to learn more about the different types of movement disorders:

Parkinson’s disease is a condition that affects control over your movements. Its motor symptoms are mainly caused by a decrease in the manufacturing of dopamine, a chemical that helps the nerve cells in your brain communicate with each other. When dopamine is missing from certain areas of the brain, the messages that tell your body how to move are lost or distorted. This can lead to symptoms such as shaking, stiffness and slow movement. There’s no cure for Parkinson’s disease but proper treatment can help ease symptoms and allow you to live a full, active life.

Parkinson’s symptoms often appear gradually. Some may take years to develop. Others you may not have at all. Below are the most common:

Other symptoms include balance problems, small handwriting, soft voice volume, constipation, and reduced or “flat” facial expression.  In addition, Parkinson’s disease can cause many non-motor symptoms, including depression, apathy and sleep problems. Memory loss or other problems with thinking may also occur later in the progression of the disease.

There is no single test for Parkinson’s disease. The diagnosis is based on your symptoms, medical history and a physical exam. You may also have tests to help rule out other problems. These may include blood tests to look for diseases that cause similar symptoms. They can also include brain-imaging tests, such as an MRI of the brain.

Treatment for Parkinson’s disease is multi-faceted, including medications to replace the dopamine in the brain and to help it act more effectively. Exercise is a powerful modifier of the symptoms of Parkinson’s disease. Surgical treatment of advanced Parkinson’s with deep brain stimulation (DBS) is available at the Gardner Center.

The center is active in identifying new treatments for symptoms and halting its progression. Future research will focus on understanding the molecular differences between people with PD and will allow better defined subtypes of PD to be slowed with molecular therapies (“neuroprotection”). The neurologists of the Gardner Center are part of the Parkinson Study Group (PSG), made up of academic centers designing and carrying out research on PD across North America.

If you think that you or a loved one might be exhibiting some of the symptoms of Parkinson’s disease and would like to make an appointment with a movement disorders specialist, please call (513) 475-8730.

Corticobasal degeneration (CBD) is a progressive neurological disorder characterized by nerve cell loss and atrophy of multiple areas of the brain, including the cerebral cortex and the basal ganglia. CBD progresses gradually. Initial symptoms, which typically begin at or around age 60, may first appear on one side of the body but eventually will affect both sides as the disease progresses.

Symptoms are similar to those found in Parkinson’s disease, except for their more marked asymmetry and the appearance of early limb dystonia, impaired balance and cognitive impairment. Distinctive symptoms may include visual-spatial impairments (e.g. problems with depth perception or finding directions), apraxia (loss of the ability to make familiar, purposeful movements), hesitant and halting speech, myoclonus (limb jerks), and dysphagia (difficulty swallowing). People with CBD often have poor response to anti-Parkinson medications.

If you think that you or a loved one might be exhibiting some of the symptoms of corticobasal degeneration and would like to make an appointment with a movement disorders specialist, please call (513) 475-8730.

Progressive supranuclear palsy (PSP) is another degenerative brain disorder. PSP symptoms include rigidity and slowness, difficulty looking up and down, problems with speech, and balance difficulty causing multiple and repeated falls, often backwards. Other symptoms can include swings in emotional state (pseudobulbar affect), cognitive impairment, and difficulty opening the eyes (blepharospasm, also termed apraxia of eyelid opening). Like CBD, people with PSP also typically have poor response to anti-Parkinson medications.

If you think that you or a loved one might be exhibiting some of the symptoms of progressive supranuclear palsy and would like to make an appointment with a movement disorders specialist, please call (513) 475-8730.

Multiple system atrophy (MSA) is a progressive neurodegenerative disorder. It is characterized by symptoms of autonomic nervous system failure, such as lightheadedness or fainting spells, constipation, erectile failure in men, and urinary retention. Early symptoms mimic Parkinson’s disease, such as resting tremor, rigidity and slurred speech, but appearance of balance and autonomic impairments help to differentiate the two conditions. MSA affects both men and women, primarily in their 50s. The rate of progression varies from swift to slow. Symptoms can respond initially to anti-Parkinson medications.

MSA is the collective name for disorders previously known individually as striatonigral degeneration, sporadic olivopontocerebellar atrophy, and the Shy-Drager syndrome.

If you think that you or a loved one might be exhibiting some of the symptoms of multiple system atrophy and would like to make an appointment with a movement disorders specialist, please call (513) 475-8730.

Although people commonly identify tremors with Parkinson’s disease, a person who experiences tremors does not necessarily have Parkinson’s. A syndrome known as essential tremor (ET) is, in fact, much more common than Parkinson’s disease. ET most often affects the hands, although some patients experience tremors of the head and neck, jaw, face and even the tongue and voice. Unlike the resting-predominant tremor of Parkinson’s disease, the tremor of ET is most often absent at rest, but present on arm stretching, during activities, and when holding objects, such as a glass of water (spilling can become a source of embarrassment and disability). Treatments for ET include oral medications and surgical treatment of the tremor with DBS.

If you think that you or a loved one might be exhibiting some of the symptoms of essential tremor and would like to make an appointment with a movement disorders specialist, please call (513) 475-8730.

People diagnosed with dystonia often experience involuntary muscle contractions that force certain parts of the body into abnormal, and sometimes painful, movements or postures. Dystonia can affect any part of the body, including the arms and legs, trunk, neck, eyelids, face or vocal cords. It may affect a single muscle, an entire muscle group, or muscles throughout the body.

When involuntary muscle contractions interfere with normal function, patients may have difficulty walking, writing or speaking. In general, patients with dystonia experience no impairment of cognition, strength, or the senses, including vision and hearing. Dystonia can be inherited (most common gene mutations are TOR1A [known as DYT1] and THAP1 [known as DYT6]), but there is no known cause in the majority of cases. Focal dystonia of specific muscle groups can respond well to injections of botulinum toxin.

If you think that you or a loved one might be exhibiting some of the symptoms of dystonia and would like to make an appointment with a movement disorders specialist, please call (513) 475-8730.

Huntington’s disease (HD) is a genetic disorder. It is passed on from parents to children. If a parent has HD, the child has a 50 percent chance of developing it. If the child doesn’t develop the disease, he or she won’t pass it along to his or her children. For one to three percent of people with HD, no family history of the disorder is ever identified.

The main symptom of HD is involuntary movements, or chorea. However, other earlier symptoms of HD often include mood changes like depression and irritability or cognitive decline.

Genetic testing can help determine your likelihood of developing HD. The UC Gardner Center has a multidisciplinary clinic for people with a family history of HD interested in learning about the testing.

The clinicians of the UC Gardner Center are part of the Huntington Study Group, made up of academic centers doing research in HD across the country. Because there is no cure, treatment of the disease means treating the symptoms to support quality of life.

If you think that you or a loved one might be exhibiting some of the symptoms of Huntington’s disease and would like to make an appointment with a movement disorders specialist, please call (513) 475-8730.

Normal pressure hydrocephalus (NPH) is a disorder resulting from accumulation of cerebral spinal fluid (CSF) in the fluid-filled spaces of the brain which are called ventricles. This can lead to symptoms of gait difficulty, urinary incontinence and dementia over time. Because these symptoms are not specific, diagnosis of NPH is based on the presence of large ventricles on imaging studies (CT scan or MRI), a clinical history that starts with gait difficulty rather than dementia, and selected neurological examination features. The diagnosis is supported if NPH-suspected symptoms improve with drainage of cerebral spinal fluid, tested through a large-volume spinal tap or a three-day lumbar drainage protocol, which requires hospitalization. If the response to a tap or fluid drainage is favorable, the permanent treatment of NPH consists of surgically placing a shunt in the brain which constantly drains the extra cerebral spinal fluid into the abdomen.

If you think that you or a loved one might be exhibiting some of the symptoms of normal pressure hydrocephalus and would like to make an appointment with a movement disorders specialist, please call (513) 475-8730.