A Look Inside with Radiology 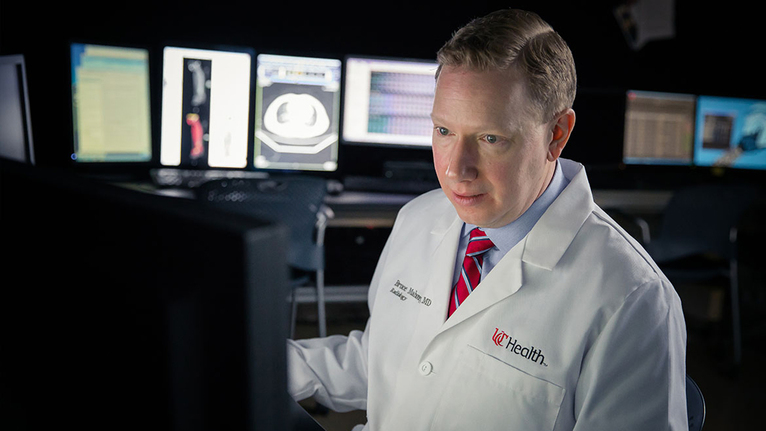 Your eyes will adjust – just give it a minute.”

UC Health radiologist Dr. Bruce Mahoney, assistant professor of radiology at the University of Cincinnati College of Medicine, takes a seat in the darkened room. The computer screen before him illuminates, revealing the electronic medical chart of his patient.

The chart contains rows and rows of images and notes, each with a story to tell from the past decade. But Dr. Mahoney, who specializes in nuclear medicine, doesn’t just see data — he sees the patient spring to life before his eyes.

He chooses a scan taken earlier this morning. The patient, he says, has cancer and has visited UC Medical Center today to find out if the treatment is working.

Dr. Mahoney also understands the personal nature of what he does — somewhere in the building, not far from where he sits, the patient whose body now appears on his screen is waiting nervously to hear what the scan has revealed.

“We try to read at least 90 percent of urgent scans in under an hour,” he says.

As he carefully views the image, Dr. Mahoney dictates comments into a small microphone to record what he sees.

“The small and large bowel appear normal period.” His fingers fly across the keyboard and move quickly through the other images, which seem to race along with the rapid movement of his experienced eyes.

Elsewhere in this darkened room, three other radiologists are also reading images. The room is silent, though every now and then the voice of an attending radiologist begins explaining a technique or pointing out a subtle abnormality to the medical residents and fellows who are studying under them. They cluster around a computer screen, the glow of the black and white images reflecting on their faces.

But otherwise, there are no phones, music or distractions – just the hum of the computers and the occasional low voice dictating an observation into a microphone.

While most people think of radiology as the practice of reading scans in a dark room all day — and truthfully, much of it is — they never see the nuance, the science and the humanity it demands.

Radiologists don’t interact directly with patients most of the time, but Dr. Mahoney feels like he knows them nonetheless.

Radiologists may not be the most visible medical professionals in the hospital, but they play critical roles in the care and lives of their patients.

In fact, radiology often marks the turning point in a patient’s medical journey. The reading room is where a suspicion turns into a diagnosis, where a question becomes an answer — and where treatment and recovery can begin.

“It’s easy to feel like you know them,” he says. 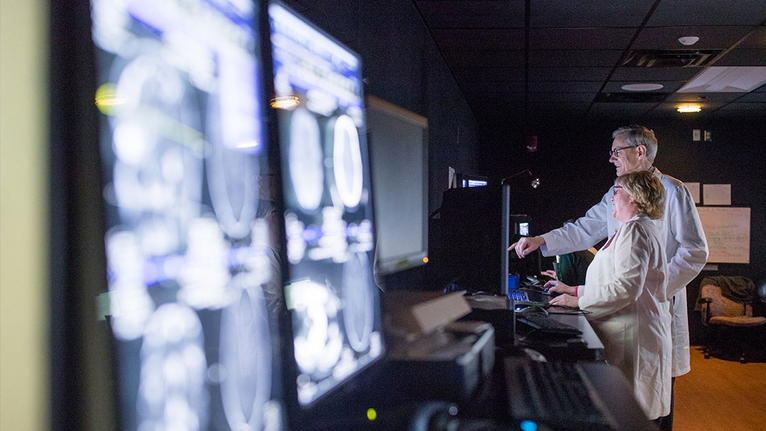 Dr. Mahoney’s interest in radiology and nuclear medicine began early, when he was still in medical school. “I think it appeals to people who have a certain enjoyment of problem-solving and people who are somewhat meticulous and detail-oriented in general,” he said.

Radiologists must be able to spot the difference between the most minute details of the body’s systems and not only decipher between the normal and abnormal, but make sense of it all.

“The truth is that when your eyes are inside the patient looking at their anatomy, the answers are not always straightforward,” Dr. Mahoney said. “It’s teasing out the parts of the puzzle and putting them together and synthesizing them into a meaningful answer for the doctor — and with many patients, that’s a challenge.”

Radiologists develop their own “search patterns,” or a methodical way of reviewing each and every aspect of a scan. These search patterns are critical to ensure they don’t miss small — but crucial — details that may mean the difference between life and death.

“If you pull up the image and you see an obvious abnormality, it’s going to grab your eye,” Dr. Mahoney said. “But you still have to look at everything else.”

At UC Health, every radiologist specializes in a single area of focus. Some dedicate their careers to viewing only images of the brain and spinal cord, training their eyes to interpret the most complex and challenging cases.

“By reading things more frequently, you become more skilled at it — and frankly, more efficient at it,” Dr. Mahoney said. “And that’s important because at UC Health, we have more complex medical cases. The ability to focus in on those allows you to provide a higher level of care.”

At UC Health, the radiologists’ expertise and skill only improve with time, as they spend their careers caring for patients while also teaching the next generation of radiologists at UC College of Medicine.

For Dr. Tyler Fuller, a first-year radiology resident, this field is “one of the best kept secrets in medicine.”

And at UC Health, his training includes the chance to learn alongside experts like Dr. Mahoney, receiving one-on-one training in both the classroom and the hospital.

“In radiology, you’re with the attending physician all day long,” he said. 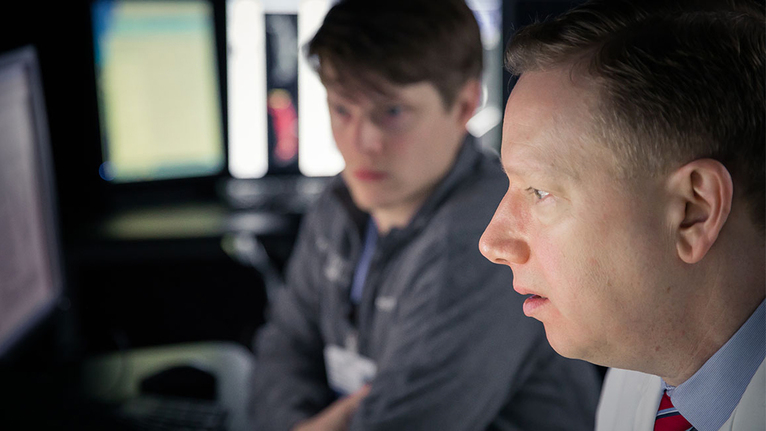 Not every radiologist only imagines their patients.

Dr. Rifat Wahab, assistant professor of breast imaging for the University of Cincinnati College of Medicine, fills her days with patient interactions.

Instead of passing her findings along to another physician, Dr. Wahab herself (and every other breast imaging radiologist at UC Health) meets with patients to review scans and discuss next steps — an interaction she calls “vital.”

That early diagnosis, that better chance for a longer life, happens in the reading room.

“Radiologists are on the front line in diagnosing breast cancer,” Dr. Wahab said.

She sees the life-saving power of radiology beyond the diagnosis of breast cancer. It’s what initially drew her into the field, when as a medical student, she witnessed a radiologist diagnosing child abuse from fractures in varying stages of healing seen on an X-ray initially ordered to check for a respiratory illness.

“My whole perspective changed about radiology at that point,” Dr. Wahab recalls. “Radiology is a different window to the patient, and the radiologists were making important diagnoses that were saving patients’ lives.”

It’s 10 a.m. on a Wednesday, and a small group of physicians is gathered in a conference room at UC Medical Center, some carrying mugs of hot coffee as they prepare to discuss the patients whose cases will be presented at this Tumor Board meeting.

The Tumor Board is exactly what it sounds like: a team of specialists — radiologists, oncologists, surgeons, advanced practice nurses, residents and others — gather in a room to review patients’ cases, taking a team approach to tackling the most complex cases and working to identify the best treatment plans possible.

UC Medical Center has many such multidisciplinary conferences and tumor boards, including specialized conferences for cancers of the pancreas, liver and chest.

It’s at these meetings where the role of radiology takes center stage.

Each case begins with a visual review of the patient’s scans, followed by a discussion about treatment and next steps. Experts come to the Tumor Board with their own set of questions, and is also able to provide suggestions for a colleague.

"Can we remove this tumor in the lung?", one physician may ask. "No", a pulmonologist might respond, "because the patient’s lungs aren’t healthy enough to withstand the surgery."

It’s this collaboration, this meeting of the minds, that allows patients at UC Health to know their care is well-rounded, custom-built and targeted to achieve the highest success rate and best quality of life.

On this day, Dr. Sangita Kapur, assistant professor of radiology for the University of Cincinnati College of Medicine, pulls up a black and white image of a patient’s lung, projected onto a large screen on the wall at the front of the conference room.

A single gasp can be heard — a large white spot on the lungs glares on the screen.

Dr. Kapur measures the tumor with two clicks of the mouse, allowing the team to see whether the mass has grown since the most recent scans, which were taken at another hospital that referred the patient to the experts at UC Health.

A biopsy of the mass has been performed, but the results aren’t in yet. After some discussion, the Tumor Board members agree that a PET scan — a nuclear medicine image — is the best next step to help determine whether the cancer has spread.

Dr. Kapur flips a new scan on the screen, moving onto the next patient. 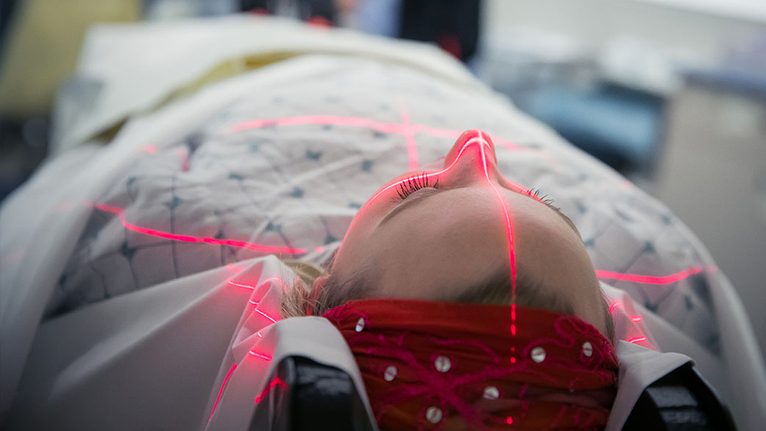 Whereas most specialties focus on just one part of the body — the chest or the abdomen, for example — nuclear medicine is a type of imaging that uses radioactive substances to find abnormalities in any part of the body.

A radioactive medication that is visible by specialized imaging devices helps radiologists identify certain body functions at the molecular level — providing a laser-like look at what is happening inside a patient’s body.

Today, Dr. Mahoney is reviewing images from a PET CT scan using a tracer that is bound to glucose: tumors often metabolize glucose in higher quantities, and the tracer could provide clues that can’t be seen on an ordinary imaging scan.

He brings up a full-body PET scan of the patient, rotating the 3-D image with his computer cursor.

He identifies several vertebrae with “hotspots,” or brighter areas that reflect where the radioactive tracer has gathered in high volumes. It’s highly likely, Dr. Mahoney explains, that these hotspots indicate where the cancer has spread.

It isn’t good news for the patient, who has had cancer previously.

“See,” Dr. Mahoney says somberly, pointing at the patient’s age on the chart. “The patient is younger than me.”

It’s cases like this when the science of radiology intersects with the humanity of the men and women behind the computer screens.

Dr. Mahoney’s report on the scan is factual, realistic — but not callous or blunt. A radiologist never eliminates hope — because it is his or her words that the physician will report to the patient, or the patient will read for themselves.

After making his notes on the patient’s chart, Dr. Mahoney begins reviewing the scans of the day’s other patients. These show no strange white marks, no hotspots; the images look as though they could appear in an anatomy textbook. From an imaging standpoint, there isn’t much to dissect on these particular scans. Dr. Mahoney and his colleagues will review them thoroughly, following their individual search patterns — but he can already tell that these “clean” scans won’t require a detective-like digging through the patient’s history, a consultation with residents or other radiologists, or a visit to the Tumor Board.

Medically speaking, they are uneventful. Normal.

It’s these types of scans that Dr. Mahoney likes to see.