Deep Inside the Human Brain 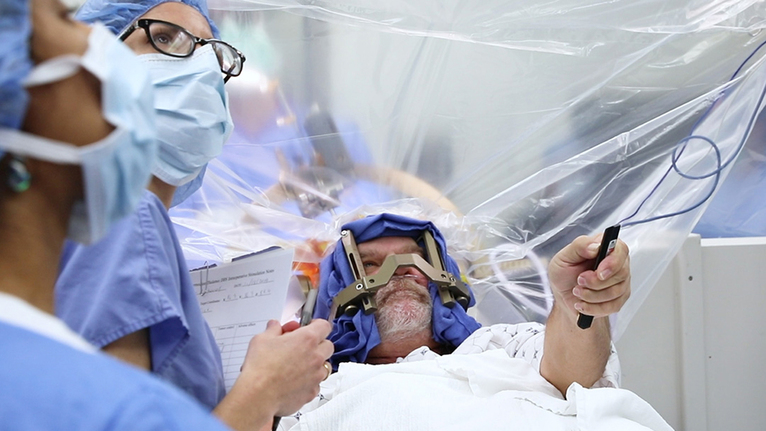 It’s 7:56 on a crisp autumn morning at University of Cincinnati Medical Center. Physicians and nurses pass through the second floor of the hospital as they prepare for this morning’s surgeries. One physician places a surgical mask on before disappearing behind the doors of an operating room.

Today, those procedures include deep brain stimulation (DBS) in operating room No. 10 for Richard Crosby, a neurological patient.

Deep brain stimulation surgery involves placing electrodes in the brain that stimulate targeted areas and help control symptoms of neurological disorders including Parkinson’s disease, essential tremor, epilepsy and some forms of dystonia. The electrodes in the brain are connected to a battery in the chest via wires that are underneath the skin.

Electrical impulses are delivered to the brain through the electrodes, similar to how a pacemaker delivers impulses to the heart. Different settings can be programmed into the device based on the patient’s symptoms and can be adjusted over time.

UC Health performs the most DBS surgeries in the region. On average, the team at the UC Gardner Neuroscience Institute performs 40-50 per year.

Richard is a 67-year old patient from Lawrenceburg, Indiana who suffers from essential tremor, causing him to struggle to do even basic things such as eating, reading books or holding tools. He had successful DBS surgery several months ago to help the tremor in his right arm. 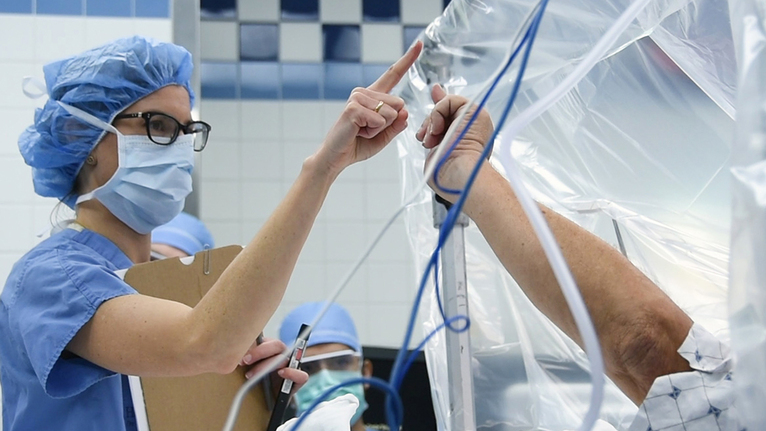 Today, he undergoes surgery to help the tremor in his left arm.

Essential tremor is a neurological disorder that causes your hands, head, voice and occasionally the legs or torso to shake during activities or when holding a posture. It’s the most common tremor disorder and presents most typically among people older than 65 in the United States. Many patients with essential tremor have a family history of the disorder.

Although deep brain stimulation is not a cure for a tremor, it can decrease the severity of it. Having already had one successful DBS surgery at UC Health, Richard knew he was in good hands.

“UC Health is the best place to have it done,” Richard said.

Before the surgery, Cara Jacob, MD, UC Health neurologist and assistant professor in the Department of Neurology and Rehabilitation Medicine at the UC College of Medicine, evaluated Richard in the office to see if deep brain stimulation was the best option for him. His tremor was so severe that medications were no longer beneficial.

“We discussed Richard’s case at our multidisciplinary DBS conference, and the team decided he would be a good candidate for surgery,” Dr. Jacob said. Members of the team include physicians, surgeons, nurse practitioners, neuropsychologists and nurse navigators.

Richard is wheeled into the OR at 8:14 a.m. and has a stereotactic frame attached to his head, which will help guide the electrode to the targeted location in his brain. Dr. Torres and the resident physician prepare for the surgery by reviewing imaging of Richard’s brain to map out the stereotactic coordinates that will be dialed into the frame.

While Richard receives medication through an IV to keep him comfortable, he is not placed under general anesthesia because he needs to be able to interact with the physicians throughout the surgery.

A circulating nurse does a “time out” prior to the start of the surgery and reads aloud Richard’s name, allergies, surgical site and procedure he is having. “The time is 9:14,” the nurse states. The surgery is officially underway. 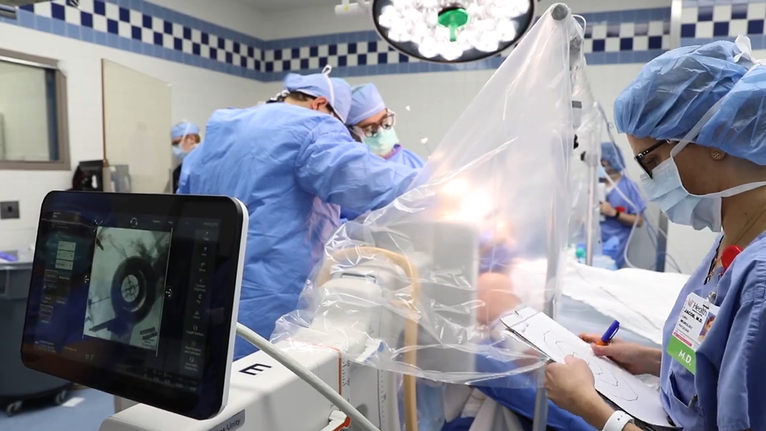 Dr. Torres and the resident physician begin by meticulously cutting a section of Richard’s scalp and drilling a small hole at the top of his skull to access his brain. They carefully prepare the delicate covering of the brain for the electrode placement. Richard’s stereotactic head frame holds the electrode driver, which Dr. Torres uses to methodically thread the electrode to the target location in the brain.

Meanwhile, Dr. Jacob explains to Richard the testing she will be doing. She hands him a laser pointer to grip with his left hand and has him point to a target on the ceiling above him, which serves as a reference point.

“My role during the operation involves testing the patient’s tremor as the electrode is advanced in the brain to help determine the optimal placement that will best control his tremor,” Dr. Jacob says.

Due to his tremor, Richard fights to hold his vigorously shaking hand still to hit the target. Dr. Jacob also gives Richard a water bottle and instructs him to pretend to bring it to his mouth to simulate drinking water from his left hand. Lastly, she has Richard reach out with his left index finger and try to touch the tip of her finger to further assess his tremor.

Dr. Torres carefully pinpoints the target location in Richard’s brain to pass electricity through the electrode. He also reviews X-rays to make sure the electrode does not move while locking it in place. The electrode is then capped and placed underneath the scalp in preparation for the second stage of the surgery, which is when Richard returns to have his care team connect the brain electrode to an extension and the battery in his chest.

With each small advancement of the electrode, Richard repeats these tasks and the team observes for improvement of his tremor. Once the electrode is felt to be in the best spot, the stimulator is turned on to test the different settings and look for any side effects.

As time wears on during the procedure, Richard’s tremor noticeably decreases. He still struggles to point the laser at the precise target on the ceiling, but his hand is shaking less.

At 10:36 a.m., Richard does one last test with the laser pointer. His tremor improves drastically. He’s able to point the laser at the ceiling and nearly hits the target. The surgery is now complete. Post-surgery, Richard returns to UC Health to have the battery in his chest turned on.

“His tremor definitely improved. Now he will hopefully have better tremor control of both sides,” said Dr. Jacob.

It takes a team to perform a successful deep brain stimulation. On this morning, the team makes a positive impact on Richard’s life and gives him the opportunity to have a return to all of the activities he loves, including fishing and reading.

“UC Health is great. I can’t imagine any place in Cincinnati being better, and they have the best surgeons,” Richard said.