A Drug Studied at UC Health Stopped MS in Its Tracks

Michael Farrow was the tough guy. He was known as Big-un’ in some circles and, affectionately, as Tiny in others. 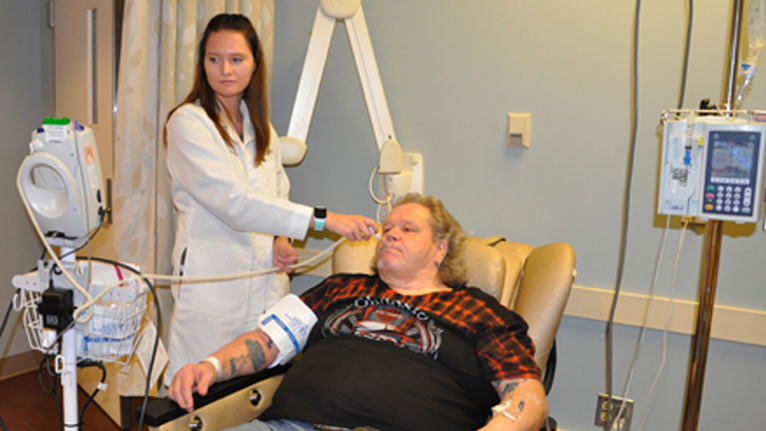 In his day job he was a team leader at an auto dealership, supervising other mechanics as they serviced 20 cars a day. By night, he worked as a bar bouncer and bodyguard. The love of his life? A Harley that roared.

The transition, as one might imagine, did not come easily.

“I was working in the shop when I fell for no apparent reason,” Farrow says. “I got up and looked to see if something on the floor had caused me to fall, but there was nothing. I then went over to a stall to work on a car. I was rotating tires and had loosened the lug nuts when I fell backwards. I felt like an idiot lying there with a tire on my chest.”

His left side completely numb, Farrow managed to drive himself to an emergency room. The possibility of a stroke was ruled out, but Farrow’s immersion in the healthcare system was just beginning. A spinal tap brought the definitive diagnosis. At age 45, Farrow had multiple sclerosis.

Under his doctor’s supervision, Farrow tried one medication, but it made him so sick with flu-like symptoms that he stopped taking it within a year. His decision left him drifting alone with a disease that flared up without warning, making life uncomfortable and work almost impossible. During the next few years he suffered three serious exacerbations, one of which resulted in a six-week stay at the Daniel Drake Center for Post-Acute Care.

Knowing he needed help, Farrow sought out the Waddell Center for Multiple Sclerosis at the University of Cincinnati Gardner Neuroscience Institute. Farrow’s doctor at the Waddell Center made a bargain: If he could get his weight down to 300 pounds, he could enroll in a study of a new medication that might help him. Reaching the 300-pound mark was critical, because that was the maximum weight the MRI machine could accommodate.

Farrow lost the weight and was enrolled in a multi-site trial of a promising new drug called ocrelizumab, which was recently approved by the Food and Drug Administration and is now being marketed by Genentech/Roche as Ocrevus. The drug is approved for relapsing remitting MS, the most common type (which Farrow has), and it is the first drug ever approved for primary progressive MS, a rapidly debilitating condition that leads to paralysis and affects approximately 10 to 15 percent of people with MS.

At the time of his enrollment in the study, Farrow didn’t know whether he was getting the real drug or a placebo, but he soon had a hunch. Except for some sleepiness after his first two infusions of the drug, there were no side effects. And, most importantly, he was feeling better. Sixteen months into the study, Farrow was officially told that, yes, he was indeed getting the new drug, ocrelizumab.

Since Farrow began taking the drug more than four years ago, he has had only one exacerbation, an event that followed an extraordinarily difficult time that included breaking up with his fiancée.

Ocrevus uses a mechanism of action that is new to MS treatment. In the clinical trial that included Farrow, it reduced the relapse rate and disability progression in people with the relapsing form of MS by nearly half compared to an existing MS medication, Rebif, and prevented MRI lesions. A concurrent trial found that patients with the more aggressive form of MS had a lower rate of disability progression with Ocrevus compared to patients taking a placebo.

“Access to new therapies via clinical trials provided by an academic health center is crucial for MS patients,” says Aram Zabeti, MD, director of the Waddell Center. “We now have 10 additional patients involved in a follow-up study of this important new drug before medication becomes commercially available.”

Farrow still has challenges. He had to give up full-time work, a deflating experience for a man whose dedication to his former employer is etched in a giant tattoo on his right arm. “I used to be in control of my life,” he says. “I have tried to stay active in some way. I can fix a car over the phone.”

On the bright side, Farrow still rides his Harley.

“If the whole world is on my shoulders and I can get on a motorcycle,” he says, “everything’s good.”