Not that long ago, a short walk used to exhaust Shane Vicars. Today, Shane has completed 10 marathons within 12 months. And he’s not planning to take his running shoes off anytime soon. 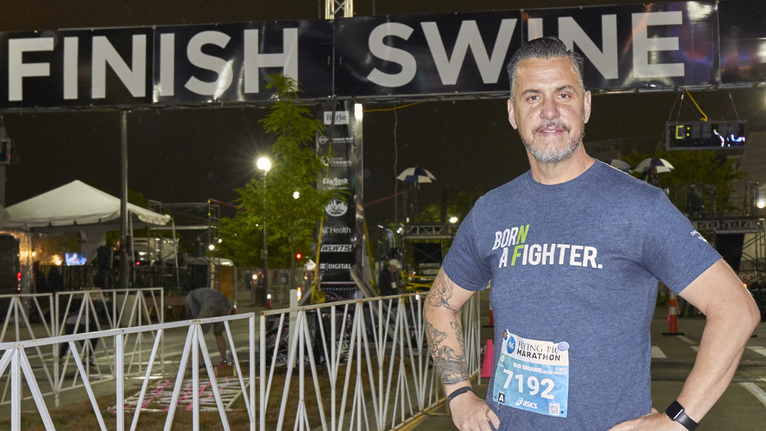 Not that long ago, a short walk used to exhaust Shane Vicars. Now, just a couple of years later— Shane has completed 10 marathons within 12 months. And he’s not planning to take his running shoes off anytime soon.

In 2016, Shane Vicars was tired of feeling uncomfortable in his own body. Weighing 374 pounds, he decided to overhaul his lifestyle and undergo weight loss surgery.

“My wake-up call came when I realized that if I continued down this path, my quality of life would decline, or worse—I could lose my life,” said Shane. The decision came easily. “I know that UC Health is the best in the country, and I’m lucky enough to have West Chester Hospital practically in my backyard.”

Shane attended an information seminar offered by the UC Health Weight Loss Center and immediately decided that he wanted to take steps toward a healthier life.

“Weight loss patients are some of the happiest people I have ever met in my life. It’s thrilling to offer them this powerful tool for weight loss and see them do incredible things with it,” said the UC Health Weight Loss Team. “We have so many extraordinary success stories like Shane because our patients put in the hard work to change their behaviors.”

Each visit to the Weight Loss Center boosted Shane’s resolve to stick to his new lifestyle.

“The whole team is amazing. They keep you on track in every way,” says Shane. “I have sent many emails, asked many questions, and their responses are always encouraging. I am blessed to have these people in my life.” 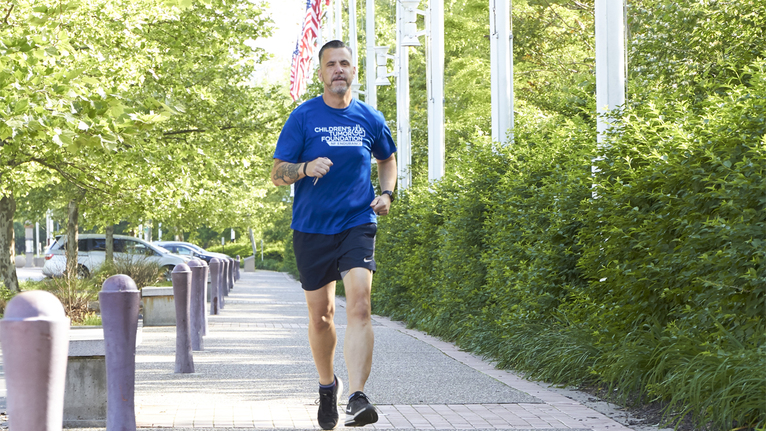 After his surgery in 2016, Shane adopted a healthy diet and an exercise program—and the momentum inspired him. Weight loss relieved the burden on his joints, and Shane took up running. He decided to set a goal: run the Flying Pig marathon in 2018.

“When I first started, I could literally only run about 10 feet,” said Shane. “I applied what I could and would run 10 feet, walk 20, run another 10—building up my endurance one day at a time.”

Shane successfully completed the 2018 Flying Pig, and that accomplishment sparked an unstoppable outlook on the future.

“Something got to me and I could not stop running. I signed up for another marathon two weeks later, and another one after that, until it spiraled out of control,” said Shane, laughing.

So far, Shane has lost 169 pounds, and he has run 10 marathons in 12 months, wrapping up the year where he started—finishing the 2019 Flying Pig.

Now his sights are set on a mammoth goal.

“I want to run 100 marathons before my 50th birthday,” he said. That means Shane plans to tackle 90 marathons in the next five years.

Shane has advice for anyone contemplating weight loss surgery: “I believe that you have to first want to do it for yourself. If you’re not 100% dedicated to the program, you won’t get 100% results. I will never be overweight again. UC Health has given me the tools to control my weight for the rest of my life—and I’m running away with them!”

The obesity epidemic continues to grow, affecting nearly 40 percent of the population, according to new data published in The State of Obesity: Better Policies for a Healthier America 2018. In 2016, the Centers for Disease Control and Prevention reported 93.3 million U.S. adults were affected by obesity.

Obesity is categorized as a body mass index (BMI) of greater than 30. Surgical interventions are especially recommended for BMIs of 40 or higher, and especially if a patient has other conditions such as hypertension, diabetes, heart disease or sleep apnea.

“Weight loss surgery has shown to be the most effective treatment for obesity, especially for those people who need to lose 100 pounds or more,” said the UC Health Weight Loss Team.

“If you have tried to lose weight on your own and are unable to maintain a healthy weight, and have diabetes, high blood pressure or high cholesterol, weight loss surgery can increase your chances of living longer. It can also reduce the risks of many health conditions.” 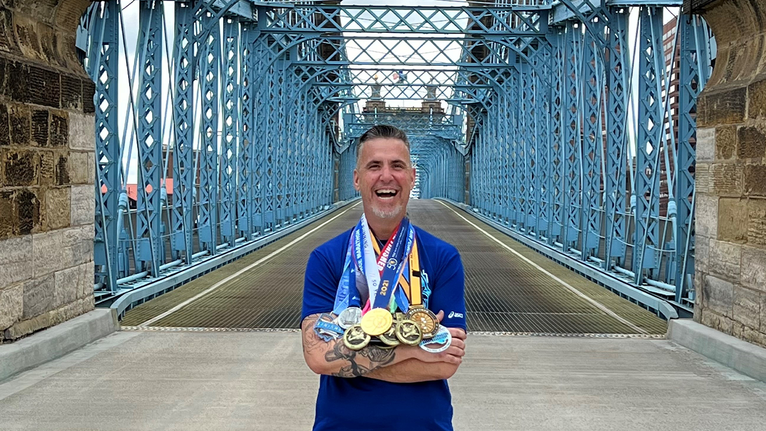 In 2022, Shane Vicars continues to have marathon fever, after losing nearly 170 pounds with gastric sleeve surgery in 2016 at the UC Health Weight Loss Center.

Since November 2021, Shane has completed the New York City Marathon and the Wilmington, North Carolina Marathon. On Sunday, May 1, Shane will run his 20th marathon when he participates in Cincinnati’s Flying Pig Marathon. He will participate in marathons in Chicago and Berlin, Germany in the fall.

Shane has successfully maintained his weight loss through behavior modification, a balanced diet and exercise – lots of exercise. He credits the Weight Loss Center team and its approach to long-term weight loss.

“What the UC Health Weight Loss Center has done for me is amazing,” he says today. “Their formula works.” He continues to share his story with others and encourages those struggling with obesity to take the next step to lose the weight and achieve good health.

Shane is upbeat and enthusiastic about the future, sharing that he has plans for additional marathons.

Proud of his accomplishments, Shane is also proud to share that while he runs for himself, he also runs for a worthwhile purpose near and dear to his heart. “I run for charity – I raise money for the Children’s Tumor Foundation.”