Chris Mackay and Ashley Davis, both from Northern Kentucky, work together for St. Elizabeth Healthcare in Edgewood, Kentucky. 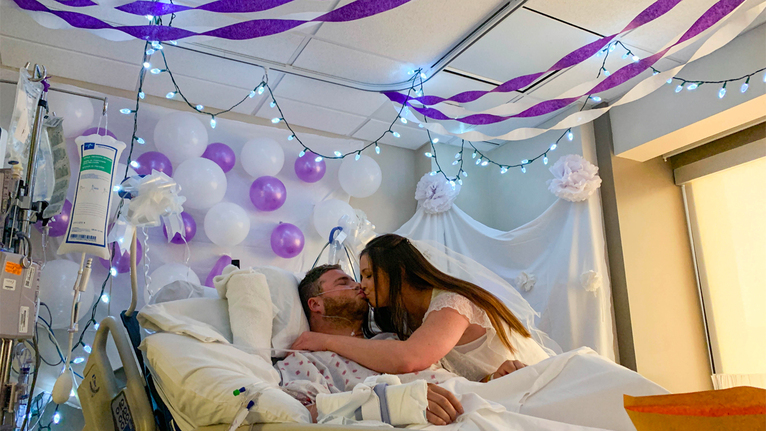 Chris is a nurse and Ashley is a surgical assistant. “He had to chase after me at first, but then I quickly fell in love,” said Ashley, chuckling.

Chris and Ashley just spent a week in Florida at Universal Studios for a pre-summer getaway. The Saturday before they left, they picked out Ashley’s engagement ring and he planned that he would propose in July.

What he didn’t know then was that Ashley would be wearing the ring earlier than expected.

They returned home Saturday, May 18, and just a day later, Chris got into a severe accident, where he broke his C5 spine vertebrae in his neck. This has temporarily left him with function in his arms but none in his legs.

Chris was admitted at the University of Cincinnati Medical Center, which houses the region’s only adult Level I trauma center equipped to treat his level of injury. After surgery, he transferred to UC Medical Center’s Neuroscience ICU to recover.

“I am taking all the victories in my recovery, no matter the size,” Chris said.

The unexpected situation caused the couple to rethink their engagement plans.

“Right before he was taken to surgery Sunday night, we knew we didn’t want to wait another day and wanted to just get married here in the hospital,” Ashley said.

Their family and close friends all crammed into Chris’s ICU room to watch the couple exchange their marital vows on Tuesday, May 21, with their pastor officiating.

Chris’s care team at UC Medical Center in the Neuroscience Intensive Care Unit put up elegant wedding decorations, with help from the Patient Relations department. Although it wasn’t in a normal wedding venue, their love outshined it all.