After an improper diagnosis, Brazilian jiujitsu fighter finds relief thanks to treatment at UC Health. 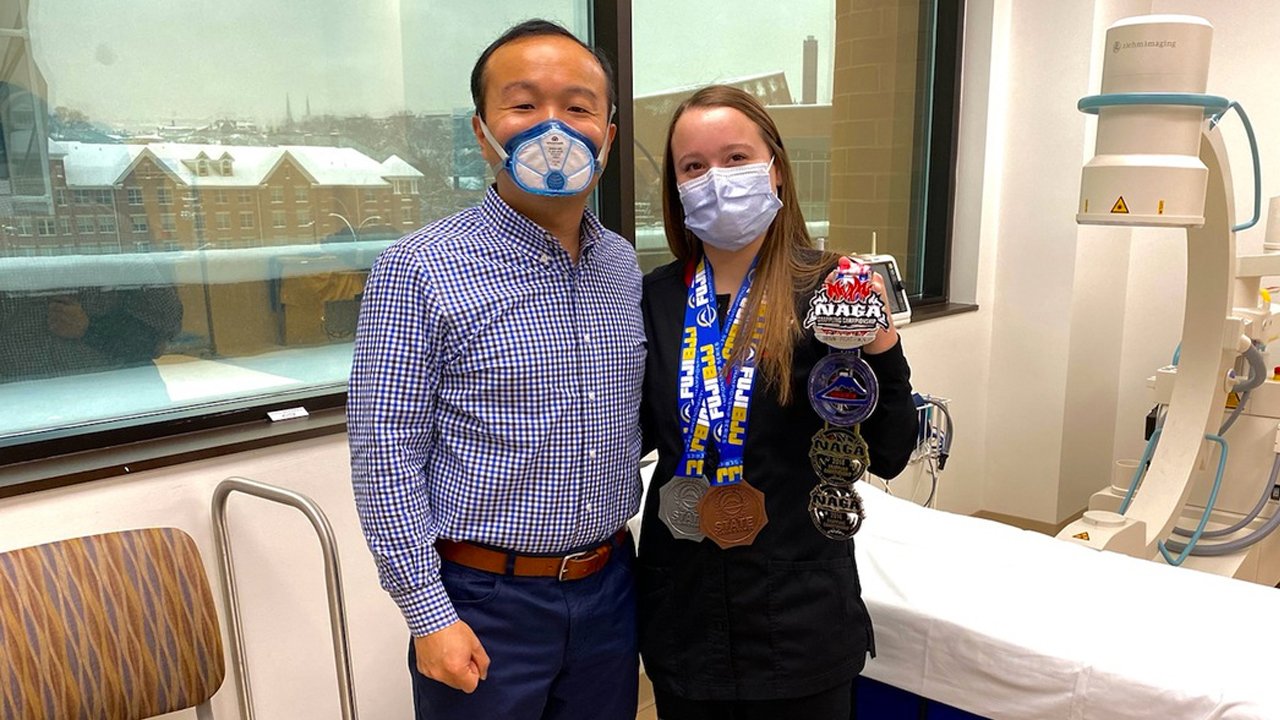 On Nov. 14, 2020, Jessica Rentz competed in the Ohio Fuji Brazilian Jiujitsu State Championship. This medal was one of the hardest she competed for not just because of the difficulty of the match, but because of the mental and physical obstacles she overcame to get there.

In the fall of 2011, two of Jessica’s siblings signed up for an introductory martial arts class at a local gym. Jessica, just 14 years old at the time, decided to tag along to watch. Soon after, the gym’s owners noticed Jessica’s interest and asked her to join the class.

Jessica’s family could not afford a membership, so the gym’s owners, Jeff and Abby, offered her a deal. If she came in every Friday to help clean the gym, she could participate in the classes and receive training. The offer was a no-brainer. Soon, Jessica mastered the fundamentals, and cleaning turned into facilitating kids classes, private lessons and parties. She did all of this while developing a passion for Brazilian jiujitsu, a certain type of martial art.

For Jessica, learning the various types of martial arts was not only fun, but was also an escape from life outside the gym. “It was something that kept my mind off of things that would go on at home,” she said.

Jessica and her six siblings were born and raised in Cincinnati. Her dad passed away in 2011 from stage 4 colon cancer. She was not particularly close with her mom and her siblings.

She has developed her closest relationships at the gym.

“I am very close with the owners and my coaches,” said Jessica. “They are the ones I can lean on and talk to.”

It wasn’t on Jessica’s radar to become competitive. After less than a year of training, Jeff asked her to step on the scale. Not thinking much of it, she did, and Jeff said, “Well, good! I signed you up for NAGA.”

NAGA, which stands for The North American Grappling Association, is the largest grappling association in the world with over 200,000 participants. NAGA has two divisions: Gi and No Gi, the two forms of Brazilian jiujitsu.

In July 2014, Jessica was in her first tournament, placing second place in No Gi and third place in Gi.

“I was surprised, but not,” Jessica said. “I trained nearly every day leading up to that tournament, and I trusted my coach. He wouldn’t have signed me up if he didn’t think I would do well. If he thinks I’m good enough, then I’m good enough.”

It was then that Jessica was fully committed to the sport. “There’s always something you can learn. No one fight is the same,” she explained.

Jessica continued to train every day and developed defense skills and techniques in preparation for more tournaments. Her training, however, came to a screeching halt in February 2017.

Jessica was in a car accident that would impact the rest of her life. However, because she didn’t have any visible injuries, its severity was initially swept under the rug.

“When the accident happened, I tried to get the school nurse to look at me and tried to get my mom to take me to the hospital,” said Jessica. “I couldn’t sit in the same position for more than five minutes. I’ve never felt so much pain.”

For two weeks, Jessica suffered through her pain until finally, her mom made her an appointment with a local orthopaedic surgeon that her mom had seen previously.

“I always got the impression that he wanted me in and out,” Jessica recalled. “His hand was always on the door handle, ready to leave.” She knew this wasn’t the quality of doctor she needed to see, but not knowing where else to go, she continued on with his treatment plan.

Jessica’s specialist didn’t offer her much hope that she would be back to wrestling any time soon, or even any relief for her pain. “Because I was a minor, he didn’t want to prescribe pain medication or injections,” she said.

After almost no improvement, Jessica’s doctor finally decided to administer Jessica a one-time pain medicine injection and then sent her off to physical therapy. Thankfully, she found some relief in the injection, but was nowhere near her normal activity level. All of this was taking a physical and mental toll.

“I found myself laying around the house because I was in so much pain, gaining nearly 20 pounds,” she said. “Emotionally, I was disconnected from my close friends at the gym. I went down there to see everyone, but it was very emotional seeing everyone getting their promotions, moving up in belts while I couldn’t even do the minimum.”

Nearly a year and a half later, Jessica repeated to her doctor that, despite the pain injection, she was still in an excruciating amount of discomfort. He decided to do a magnetic resonance imaging (MRI) scan, which ended up revealing an L5 vertebra fracture that had ultimately healed incorrectly, as well as mild facet hypertrophy on her L4, meaning her L4 vertebra joint was swollen, causing pressure on the nerves in the spine.

The L5, or fifth lumbar spine vertebrae, is located in the lower portion of the back, just above the buttocks. The vertebrae, or bones that make up your spine, are very strong, but are not exempt from injury. With enough force or pressure, the vertebrae can fracture or break, causing severe pain and numbness not only in the back but in the arms and legs, as well.

Despite their troublesome findings, Jessica felt a sense of validation in that there was more to the pain that she had been experiencing for almost two and a half years. Her doctor recommended she see a chiropractor.

“The best was right in front of me.”

Jessica ultimately decided to discontinue her care with her orthopaedic surgeon.

Coincidentally, during that time, Jessica was working as a medical assistant at one of UC Health’s oncology offices, and recently transferred to work in the orthopaedic & sports medicine practice.

She started noticing major differences between the orthopaedic office she had been visiting to the one she now worked for. There were stark comparisons, from how the medical staff was treated to how patients were cared for.

“It was eye-opening to really see the types of doctors and resources UC Health has,” Jessica explained. “I didn’t realize it at the time, but the best was right in front of me.”

Jessica made an appointment with Steven S. Agabegi, MD, orthopaedic spine surgeon at the University of Cincinnati Back, Neck & Spine Center and assistant professor in the Division of Spine Surgery in the Department of Orthopaedics & Sports Medicine at the UC College of Medicine.

After a comprehensive consultation and review of Jessica’s MRI scans, Dr. Agabegi referred Jessica to his colleague, Siu Fung (Will) Chan, MD, UC Health anesthesiologist and pain medicine specialist and assistant professor in the Department of Anesthesiology at the UC College of Medicine.

“Dr. Chan knew immediately that the treatment plan that I was previously on was all wrong,” said Jessica. “My pain wasn’t improving because I was being treated for muscular issues rather than a fracture.”

Because Jessica’s L5 fracture had gone undiagnosed, it was now considered nonoperative.

Shortly after her consultation with Dr. Chan, he performed the first of three medial branch block injections.

A medial branch block, or medial branch neurotomy, uses chemicals, radiofrequency, cold or heat to destroy nerves near a problem joint, preventing the nerves from sending pain messages to the brain, bringing the patient relief that can last up to several years.

“The lumbar medial branch nerves are usually targeted for intervention on individuals with axial back pain due to degeneration of the facet joints, like low back arthritis,” explained Dr. Chan. “In Jessica’s case, although patients her age usually come in with back pain due to muscle overuse and sprains, she had facet mediated pain from her spine pathology that responded well to the diagnostic medial branch blocks.”

Facet joints are lined with cartilage, located between each individual backbone. These joints allow the spine to flex as well as limit its range of motion. When the cartilage is worn down or damaged, it can cause severe pain.

After two medial branch blocks, Jessica was well enough to begin getting back into the wrestling ring. In late 2019, Jessica won second place in a local FUJI BJJ tournament, and again placing second in a local NAGA Championship in early 2020. 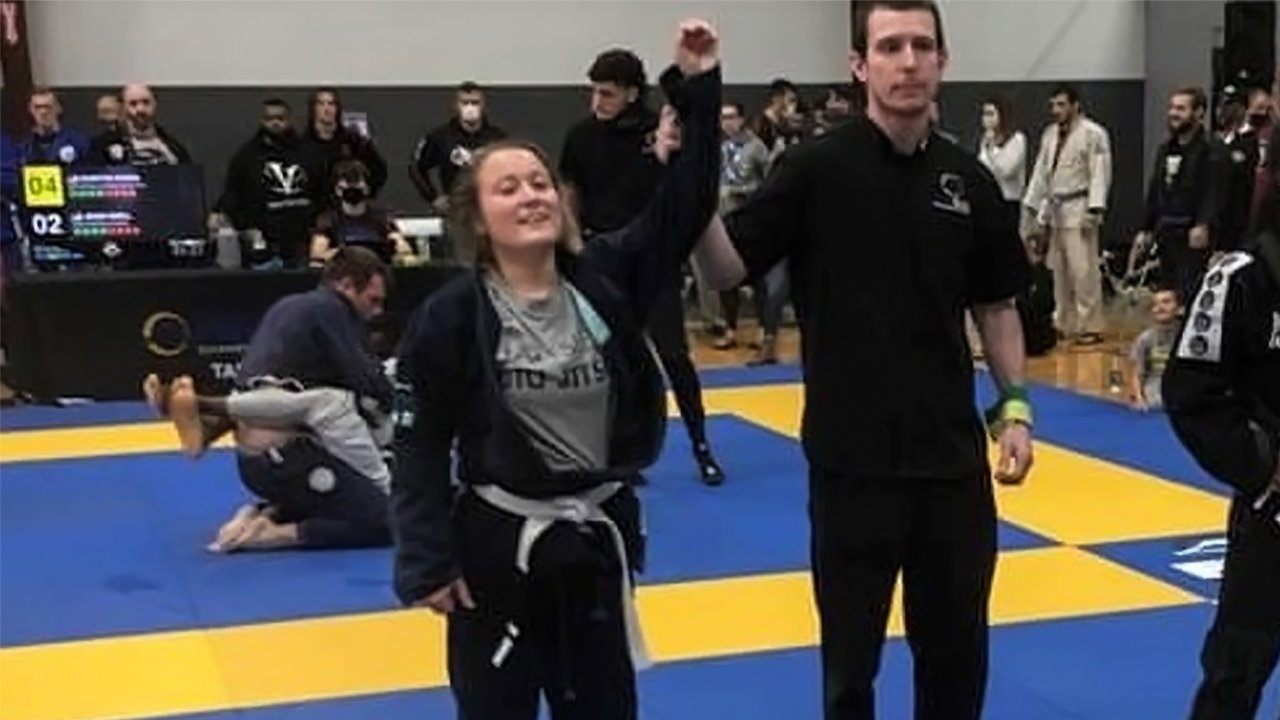 When Suffering Turns to Strength

Jessica had to start from scratch, working her way back up the belt and stripe graduation system The belt identifies the grappler’s skill and knowledge of jiujitsu. An athlete builds up stripes within each belt level, and then eventually is promoted to the next level belt.

“Talk about dedication, that’s it,” Jessica said. “It can take three months to achieve a stripe and up to a year to be promoted to the next level belt.”

Due to COVID-19, the competitions she planned on competing in early in 2020 were cancelled. But after more testing became available and best practices were adopted, competitions resumed, and Jessica qualified to compete in the Fuji BJJ State Championship tournament on Nov. 14, 2020.

“I was very afraid to step on the mat again because I didn’t want to hurt my back,” Jessica recalled. “I was picked up and slammed by a girl I was fighting, but I didn’t even feel pain.”

The fight went into overtime, and Jessica defeated her opponent.

“This was my fight symbolizing losing the weight, to keep going when I was exhausted and a reminder that all of that suffering ultimately gave me strength,” said Jessica. “I was exhausted, but I was so happy. I won for Dr. Chan.”

The fight for a pain-free life is not one that will be completely over. “Recovery has been kind of a roller coaster,” Jessica explained. “I have good days and bad days, but many days are pain-free.”

Jessica visits Dr. Chan at the UC Health Pain Center every six months for injections, and when certain activities aggravate her back, she has a compound cream to relieve the irritation.

“Dr. Chan listens and has empathy for his patients. He gave me hope,” said Jessica.

Jessica’s pain injections are not a forever solution. Some day she may need other medications or even back surgery, but she trusts Dr. Chan and his expertise.

She recalled Dr. Chan telling her, “Wrestling is your passion. I can’t take that away from you.”

“He gave me a second chance at wrestling,” said Jessica. “I couldn’t be more thankful.”

There are several other members of Jessica’s care team that she would like to share her appreciation for:

Steve A. Agabegi, MD
“Without his visit and referral, none of this would be possible. Dr. Agabegi led the way for his treatment. He led the path to hope.”

Natalie Jacobs, MD
“Dr. Jacobs is my primary care provider in Midtown. She helped me with my weight loss, going from 132 pounds to 115 pounds since May 2020. She guided my diet change, and I ultimately dropped a whole weight bracket.”