On the sunny evening of Friday, Aug. 16, 2019, Nicole decided it was the perfect night to practice riding her motorcycle. 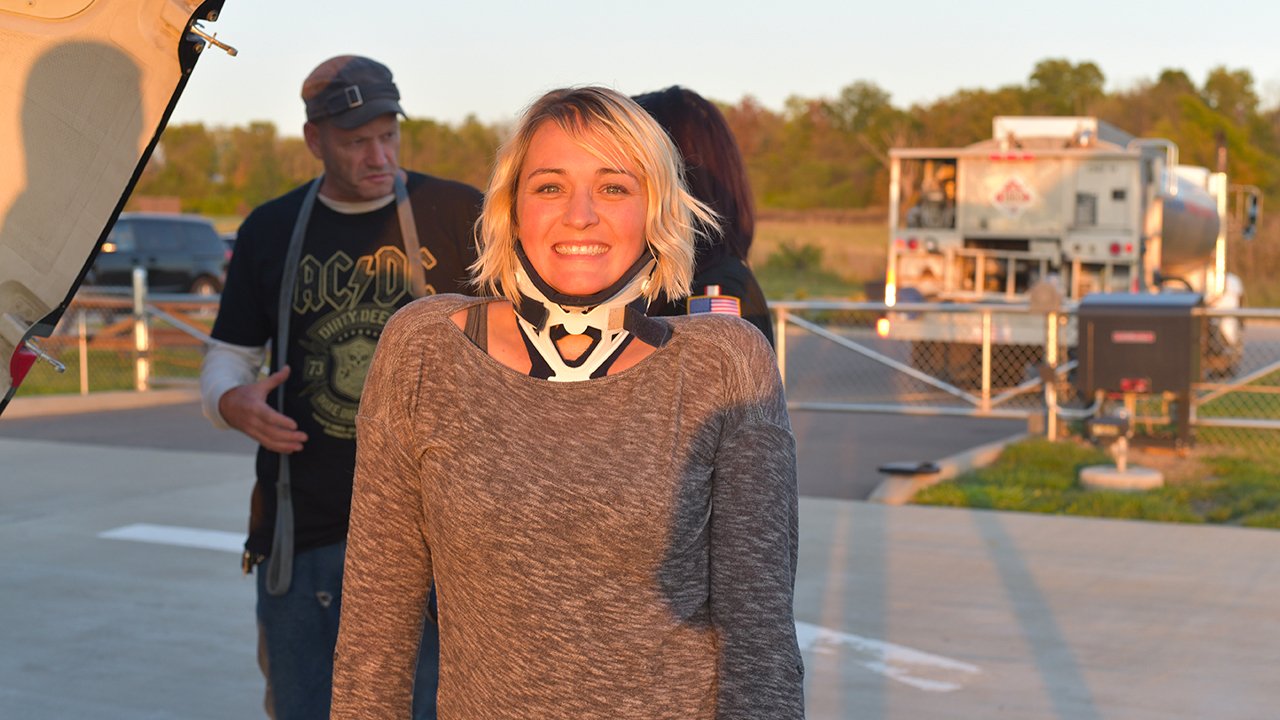 Nicole had only ever practiced riding her motorcycle within the safety of her small neighborhood in Burlington, Kentucky. On this particular night, she got the courage to drive outside these limits.

Nicole hopped on her bike and rode to Camp Ernst Lake. She then travelled a couple of miles farther down the road to visit her aunt.

At about 8 p.m., she left her aunt’s house and headed back home. Five miles away from the safety of her own neighborhood, Nicole’s trajectory drastically changed. She crashed into not only one but two cars, throwing her off her motorcycle and into a ditch. The crash was so violent, that even her helmet ejected off her head.

A UC Health Air Care crew was just wrapping up an earlier drop-off at University of Cincinnati Medical Center when they heard the news of Nicole.

“Working with the Burlington and Hebron Fire Protection Districts, we were told to land at Camp Ernst Middle School to pick up Nicole, and from there we would fly back to UC Medical Center,” said Amy Swiencki, flight nurse for UC Health Air Care & Mobile Care.

Burlington Fire Protection District picked up Nicole from the ditch and into an ambulance, then drove her to Camp Ernst Middle School to meet UC Health Air Care & Mobile Care. It took only six minutes to get Nicole to UC Medical Center via helicopter, an otherwise 30-minute drive.

The medical term for internal decapitation is occipitocervical dissociation, which is caused by rupture of the ligaments that connect the skull to the neck. It is often a fatal injury, and in those who survive, severe neurologic deficits are common. Emergent surgery is required to relocate the skull to the upper cervical spine and stabilize it with screws and rods.

After Nicole’s surgery with Steven Agabegi, MD, UC Health orthopaedic surgeon and assistant professor of orthopaedics at the UC College of Medicine, took the family into a consultation room and gave them every detail he knew in the early hours of Aug. 17.

“My family remembers Dr. Agabegi coming out to talk to them after his piece of the surgery, reattaching my skull to my spine, was complete. They were all very impressed by his explanations and willingness to answer questions,” said Nicole.

Because of the severity of the injury, Dr. Agabegi had to warn the family he wasn’t sure if Nicole would be able to walk again. If Nicole didn’t move her legs within 72 hours after her surgery, there was a low chance of her regaining any use at all.

“It was a miracle I even made it to the hospital,” said Nicole.

Nicole’s family—tired and worried—slowly came to peace with this news. They prepared for the reality that Nicole, a 37-year-old mother of seven, wife, sister, daughter and nurse herself, may not be able to walk again.

Things started to look up for the family when they received a phone call two hours later. They heard the news that Nicole moved her toe. The next day, she was moving her arms and legs.

Although Nicole suffered these numerous injuries, including a separation of her spine from her skull, Nicole is expected to make a full recovery. While she still has a neck brace and currently uses a cane to walk, the staff at UC Health, as well Boone County EMS, enabled her to return to her life as normal.

“Because of them, I got that chance to live another day. I know how lucky I am to even be here. I had several life-threatening injuries, but somehow UC Health knew just what to do, and here I am, because everyone did everything just exactly right,” said Nicole.