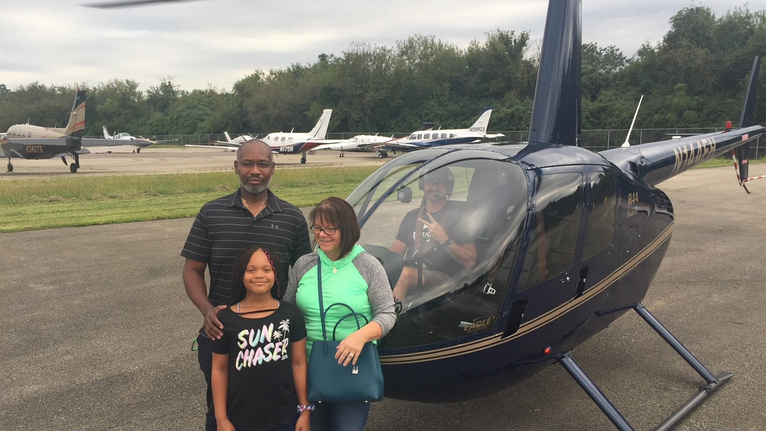 To some, these are considered the “simple” joys in life, but for Nate, they are so much more.

The Start of a Failing Heart

While at work one day during the summer of 2002, Nate came down with a cough and slight shortness of breath, so he made an appointment with a primary care physician. After a fairly routine evaluation, the physician suspected that it was bronchitis and sent Nate home with an antibiotic.

Four months went by and Nate’s symptoms had not improved. He went to his regular primary care office, where they decided to do a chest X-ray.

Immediately after reviewing Nate’s scans, the physician asked him, “Where are you going [after your appointment]?”

Puzzled, Nate answered, “I have a few errands to run.”

Based on the physician’s reaction, Nate knew he wouldn’t be running those errands. His doctor recommended he go to a nearby community hospital.

Heart failure is often misdiagnosed in its early stages due to the similar symptoms it has with other conditions. Heart failure symptoms can include, but are not limited to:

Though none of these symptoms should be ignored, they can be common with viruses like the flu and common cold, making it unlikely for one to become overly concerned enough to contact their doctor.

Nate was admitted to the hospital for two weeks. During his stay, his clinicians confirmed that he had chronic systolic heart failure.

The heart is responsible for pumping blood throughout the entire body. Heart failure occurs when it is no longer able to pump blood as efficiently as it should, causing blood and fluid to back into the lungs, preventing other vital organs from receiving oxygen-rich blood. In this case, that vital organ was Nate’s left kidney.

“The doctors told me I needed a pacemaker to remove the fluid from my lungs,” said Nate. “From there, everything progressed – everything was good.”

When the heart begins to fail, its electrical “wires” can also become damaged. These wires are needed to assist in pumping blood. A pacemaker is a small device that can be implanted in the chest to restore a normal heart rate; this device can, on average, last five to seven years.

“For the next few years, I took my medicine and regularly exercised,” said Nate. “Until early 2006.”

Nate and his wife, Roswitha (Rose), were on their way to the grocery store when they stopped at a gas station. Having noticed that Nate seemed off, Rose opened his car door and noticed the right side of his face was drooping.

She immediately brought Nate to a community hospital where UC Health’s stroke team was stationed. After a brief inpatient stay, Nate was treated for his stroke, which was likely caused by his failing heart.

Like in most heart disorders, plaque had built up in Nate’s arteries, preventing blood flow from accessing his brain. He was put on blood-thinning medication to treat and prevent future plaque buildup. Nate also had an implantable cardioverter-defibrillator (ICD) implanted to ensure his heart’s electrical rhythm remained stable.

When the ICD detects a cardiac arrest rhythm, it sends an electrical shock to the heart. Similar to pacemakers, ICDs usually last five to seven years.

Holding Off on Heart Transplantation

Nate continued working and staying active with only a few irregular heart rhythms that were flagged and resolved by his ICD.

But in May 2007, while staying true to his military roots, Nate was cutting his hair when he noticed his heart beating really fast, then slowed down and then sped back up again.

“My ICD went off,” Nate recalled. “It had gone off before, but not like this – it was like I got hit by a Mack truck.“

Nate got to the hospital, where the staff now knew him well. After getting Nate stabilized, they encouraged him to contemplate early retirement because a heart transplant was likely the next step in his medical journey.

“I had a lot of hesitation,” Nate explained. “Sometimes you just want to hold off and see where things go.”

Later that year, Nate retired, and he was able to hold off on any transplant consideration for the next 10 years. Things seemed to have significantly improved after making some modifications to his medication regime.

“Although I was able to enjoy vacations and family reunions, I wasn’t as active as I used to be, and retirement caught up to me,” Nate said. “Between 2007 and 2017, the pressures in my heart had changed and my ICD went off again. That’s when I met Dr. Feldman.”

David Feldman, MD, PhD, is a professor of medicine and pediatrics at the University of Cincinnati College of Medicine and the clinical director at the UC Heart, Lung & Vascular Institute. He specializes in caring for patients who are in end-stage heart failure.

“We work with our very skilled colleagues in the community to coordinate care with local cardiologists and teams to keep patients close to their home for as long as possible,” Dr. Feldman explained. “However, eventually some portion of their care must be handled at UC Medical Center.”

Dr. Feldman asked Nate, “Have you ever heard of an LVAD?”

An LVAD, which is short for left ventricular assist device, is another device that is surgically implanted in the chest, which connects to an outside motor. The motor helps the heart pump blood throughout the body.

LVADs are considered a “bridge” while heart transplant patients wait for a donor.

“Well, I have to try something,” Nate thought.

The ICD pacemaker monitors arrhythmias while the LVAD supports a weakened heart that can no longer support itself or the body of a patient without external assistance. Despite the physical awkwardness, it worked as a temporary solution.

“The LVAD is in for about a year until they are able to find you an organ donor,” Nate said.

In 2018, Nate received a call that a donor may have been found, but almost in that same moment, the donor family found out that their family friend needed a new kidney, preventing Nate from moving forward with his transplants.

“Not only was I waiting on a new heart, but I needed a kidney, too,” Nate said.

When a person, like Nate, needs a dual transplant, the best practice is to receive both organs from the same donor.

Nate was first placed on the national transplant waiting list in 2009. He now found himself waiting for a donor once again.

“We have good news. You have a donor.”

Finally, on Sept. 14, 2018, Nate received another call from UC Health Transplant. He remembers it like it was yesterday. They told him they had a donor match.

“My suitcase was already packed, and I thought, ‘Here we go again.’” said Nate.

He was in the operating room at UC Medical Center that night and woke up on Sunday after the procedure.

Nate had gone nearly 10 years waiting for a new heart and kidney, and with a quick phone call and a matter of hours, he was on the road to recovery with both following his successful dual transplant.

“The ability to do multi-organ transplants requires an enormous amount of skill and expertise that can only be found in a major academic medical center,” Dr. Louis explained. “UC Health is the only health system in the region capable of providing this advanced care.”

Looking Back and Forging Ahead

Today, Nate is more than two years out from his heart and kidney transplant. Looking back, he credits his successful recovery to his family, personal will and the experts at UC Health.

“It’s very important to have a support system and be able to depend on others,” said Nate.

Because he felt so weak, leading up to his dual transplant procedure and thereafter, Nate had to depend on his family to drive him to his numerous doctor appointments, help pick up prescriptions and cook meals – mundane tasks so many take for granted.

Seemingly, Nate was prepared for this journey all along. His matter-of-fact but optimistic personality and mental toughness kept him moving forward.

“I figured there was no need to sit around and cry,” he said. “This is what we need to do and we need to keep it moving.”

Undoubtedly, heart failure and organ transplantation are daunting to embark upon. At UC Health, there is hope to overcoming these seemingly impossible missions.

Although he was equipped with his own internal strength, Nate also had to put his complete trust in the surgeons at UC Health.

“No matter what state you’re in, UC Health doctors can handle it all,” he said.

Today, Nate regularly finds himself telling others that they, too, can find health and hope at UC Health. His message is simple:

“Life is important. Get what you need done, and continue living your life!”