The Road to Madison

After Ryan and Jillian spent more than a year trying to conceive a child using timed ovulation, they decided they needed some extra help. 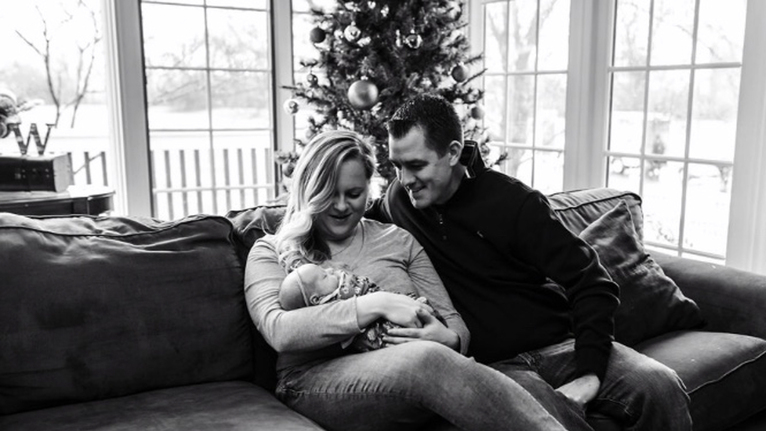 Their journey to parenthood led them to the fertility experts at UC Health’s Center for Reproductive Health, located on the campus of West Chester Hospital.

A referral from their ob-gyn led Ryan and Jillian to Suruchi Thakore, MD, and her team. The first step was to determine if the couple had an underlying health issue that made conception difficult. As it turned out, they did—at age 29, Jillian learned she has the “eggs of a post-menopausal woman,” as she puts it.

But that diagnosis was the beginning—not the end—of their story. Dr. Thakore helped Ryan and Jillian develop a game plan, laying out their options and providing insight into each potential route toward creating a family. The final decision was theirs to make.

In November 2017, the couple decided to begin their first round of intrauterine insemination (IUI). With each round of IUI came bloodwork, ultrasounds, follicle counts, pills, shots and prayers. The process involves a high level of scheduling and coordination, and Jillian said the support they received from Dr. Thakore and the entire team was incredible.

“From the first consultation through birth, we could not have dreamed of a better experience,” Jillian said. “The administrative staff greeted us by name at each appointment. Little things like that helped to calm our nerves in what is a stressful climate. There are lots of blood tests throughout the process as well, and the in-house phlebotomist was always gentle and loved to share a good joke to lighten the mood. The financial counselor, Mary, was also a godsend. Insurance is so confusing to me, and when there are so many appointments and procedures, we were so thankful to have her in our corner.

“And then there are the doctors: I truly felt like they cared about us and were rooting for us to succeed,” Jillian said. “We weren’t just patients, and they weren’t just here to get a paycheck. We were a team with an ultimate goal. And we weren’t going to stop until we got to the finish line. I am thankful beyond words for their expertise, kindness and ultimate partnership. We owe them everything.”

The first round of IUI was not successful. With Dr. Thakore’s help, the couple decided to try again in the following month. One week after Jillian’s 30th birthday, she was inseminated. The couple prayed for success.

On Christmas morning, Jillian took a pregnancy test—and it was positive. She and Ryan stood in their kitchen and cried tears of joy as snow fell outside.

Jillian wishes she could say that moment was their “happily ever after”—but as most fertility patients know, it was not that easy.

A few weeks later, Jillian lost the pregnancy. She and Ryan were devastated. They returned to Dr. Thakore’s office feeling emotionally broken and in need of support. Dr. Thakore and her team let Jillian and Ryan know that their journey was not at its end: they discussed next steps and options, and she let them decide if they wanted to take a break, try a third round or try another treatment.

The third round of IUI was also unsuccessful. The couple agreed to take a month off before trying a final round of IUI, before they would pursue other options.

On April 20, 2018, the couple received their fourth round of IUI. Jillian had been practicing meditation and mindful exercises, which she says helped keep her calm throughout the visit.

Two weeks later, the couple again had a positive pregnancy test. But it took a few weeks before they could breathe easy and think ahead to the baby they so desperately wanted to meet.

For Jillian and Ryan and many couples like them, the road to conception takes both a physical and an emotional toll. Jillian said the support they received from Dr. Thakore and the team at UC Health was invaluable.

“It is a difficult road to travel for couples our age,” Jillian said. “There’s a fine line that you must traverse; you want to cry out for support from friends and family, but conversely, when every couple in your friend group is getting pregnant, you don’t want to bring up your sad story. I hope this story brings hope to those who are suffering through the same issues and sheds light on the eternal brightness that is Dr. Thakore and everyone else who helped bring us our greatest blessing.”

After a two-year journey, Madison Beck Wiesner was born on Saturday, December 29, 2018.

“We owe everything to UC Health,” Jillian said. “From the referral through delivery it was all completed with UC Health. We wouldn’t have Madie if it weren’t for those offices and that hospital.

“They say it takes a village. I love this village and would recommend anyone struggling to conceive to visit them. I’m so thankful we did.”