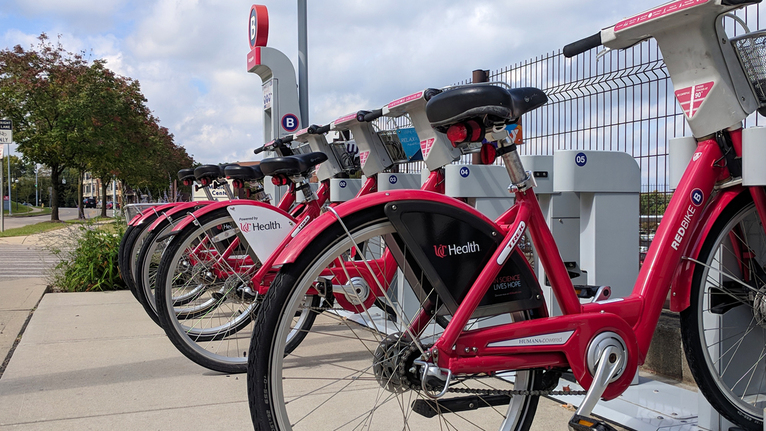 The agreement will help to ensure that the non-profit bike share system, Red Bike, will continue to be a community asset for years to come.

UC Health has been the presenting sponsor of Red Bike since the beginning, and the health system has renewed its commitment to the bike-sharing system for five additional years. The partnership includes funding support and partnering at a number of community events throughout the year, such as the annual Black Family Reunion and the University of Cincinnati Athletics Homecoming parade.

“As the region’s academic health system, UC Health is committed to improving the health and well-being of our community,” said UC Health President & CEO Richard P. Lofgren, MD. “We are proud to continue our partnership with Red Bike and to support its mission to provide a low-cost, healthy, and green transportation option that helps make us a more vibrant and connected community.”

Red Bike was launched in September 2014 with 29 stations and 263 bikes. Today, the Red Bike network covers two states and four cities—Cincinnati, Covington, Newport and Bellevue—with 57 stations and 440 bikes, all of which will continue to feature the UC Health logo. Over 390,000 rides have been taken on Red Bike, amounting to 1.2 million miles, more than 1 million pounds of carbon offset, and 47,730,321 calories burned.

“There would be no Red Bike without UC Health,” said Jason Barron, Red Bike Executive Director. “As a non-profit, Red Bike relies on partners like UC Health to continue to keep the bikes in tip-top condition so that people throughout the region can enjoy them. UC Health’s renewed commitment is going to help support  our efforts to reach more neighborhoods in the future. We are going to have a lot of fun together over the next few years.”

Red Bike is currently raising funds to support an expansion of the bike share network. The expansion could include surrounding neighborhoods like Lower Price Hill, Avondale, Bond Hill, the West End, Walnut Hills, and others. The expansion plan will also roll out electric assist – e-bikes in the spring.

The growth of Red Bike mirrors a larger trend across the U.S.: in 2017 alone, 35 million bike-sharing trips were taken across the U.S. – a 25 percent increase over the previous year, according to the National Association of City Transportation Officials.

Red Bike is also committed to growing access to bike share, and this spring it launched Red Bike Go, a $5 monthly bike share membership for Cincinnati and Northern Kentucky residents with household incomes at or below 200 percent of poverty. Over 200 people have joined Red Bike through the Go program.