In the mid-1990s, the first treatment for stroke was approved by the FDA, and it was revolutionary. 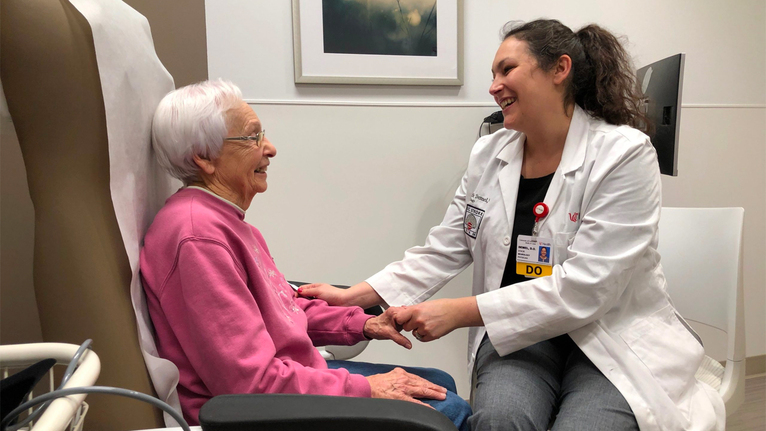 This clot-busting medication, alteplase, was being used to unclog coronary arteries, but its relevance and importance in acute stroke therapy was novel.

The safety and efficacy of this medication was demonstrated in a well-known clinical trial sponsored by the National Institute of Neurological Disorders (NINDS) and the NIH. The trial showed that if the clot-busting medication was given within three hours of stroke onset, there was clear benefit in all measures tested, including measures of disability and quality of life, 90 days after the day the stroke occurred. The physician researchers that designed this clinical trial knew that loss of blood flow to the brain caused neuronal death at a rapid pace, and that in order to save these neurons, the blood vessel would need to be opened and blood flow restored rapidly.

In the late 1980s, University of Cincinnati stroke neurologist Joseph Broderick, MD, and his colleagues helped to lead this trial that changed stroke care around the world.

Subsequent studies showed that in the right patient, the window for acute stroke treatment with alteplase could be extended out to 4.5 hours. However, the evidence remains that all else being equal, the sooner the patient is treated and the vessel is opened, the less the disability, and the more likely to return to independence after the stroke.  In fact, the notion of the “golden hour,” where strokes are treated within one hour from onset of stroke symptoms, is a goal for which all physicians should strive.

To reach the goal of treating strokes within one hour of symptom onset, mobile stroke units are popping up all over the world. This CT-equipped ambulance allows for the treatment of strokes before arrival at the nearest hospital, effectively eliminating transport and registration time, so that the stroke can be treated at the location where symptoms started.

The UC Health Mobile Stroke Unit will be in service as early as this March 2020. It will be equipped with telemedicine so that the same UC Stroke Team that has been treating all strokes in the Greater Cincinnati and Northern Kentucky region for the last 30 years will be able to evaluate a patient over a HIPAA-secure website and safely administer alteplase. The patient will then be transported to the most appropriate hospital for monitoring and care.

In the mid-2010s, stroke care again advanced in a very dramatic way, when studies showed that devastated stroke patients could literally recover speech loss, vision loss and motor function immediately following mechanical removal of a clot from a large cerebral artery that was blocking function to nearly half the brain. The cause of stroke in these patients is due to a large cerebral artery occlusion and is often severe. The first large, international, randomized trial to evaluate the use of a catheter to access and retrieve the clot was again led by UC stroke researchers.  While this trial did not show benefit over alteplase alone, advances in thrombectomy devices and a better knowledge about patient selection led to a wave of acute endovascular trials that showed an incredible benefit of mechanical thrombectomy for patients with large vessel occlusions. These findings sent shockwaves through the stroke community and again changed the face of acute stroke care dramatically.

Now stroke victims can receive mechanical treatment for acute stroke in situations where they are unable to get alteplase due to various reasons (time, recent surgery, bleeding problems) and in cases where alteplase is ineffective due to the size of the clot. In fact, endovascular therapy was shown to benefit 1 in 4 stroke patients with large vessel occlusions regain independence by 90 days poststroke. It is rare to find any other treatment in medicine with this dramatic of an effect.

We are right now in a time when other advances in stroke neurology are changing the landscape of how we practice and treat patients almost continuously. These advances come in areas of neuroradiology — which allows us to pick the right patients at the right time for intervention; technology — where telestroke allows for rapid assessment of patients regardless of where they are located, and image-sharing platforms allow for almost immediate dissemination of patient’s radiological imaging directly to our smart phones for evaluation and critical decision-making. These changes are critical in treating a disease that is so time sensitive and, if not treated effectively, can be life changing.

Acute stroke care is improving at a very rapid pace, and making sure that stroke patients in our network have access to the latest advancements takes forward thinking and a strong team. The future of acute stroke care will allow for even more nuanced care for our patients, and there is no shortage of clinical questions that remain unanswered. The University of Cincinnati, along with its partnering hospitals throughout the region, are looking for answers to these questions through ongoing stroke trials. Perhaps adding a second medication to alteplase will allow for more rapid and/or lasting opening of arteries. Maybe an agent similar to alteplase will prove to be more efficacious with fewer complications. Perhaps the next wave of changes will be through advancement in acute stroke imaging.  All of these questions, and more, are being answered at the UC Comprehensive Stroke Center and its partners in the region through clinical trials.

The symptoms of ischemic stroke are rapid onset of changes to speech, strength or sensation that affects one side of the body, vision loss or difficulty walking, due to a blocked vessel. The goal of acute stroke treatment remains the same — to restore blood flow to blocked cerebral vessels. While tremendous strides have been made, the UC Stroke Team implements best practices and continues on a path of discovery in all facets of stroke care.