Having a baby is a life-changing event filled with tremendous joy and infinite possibilities. 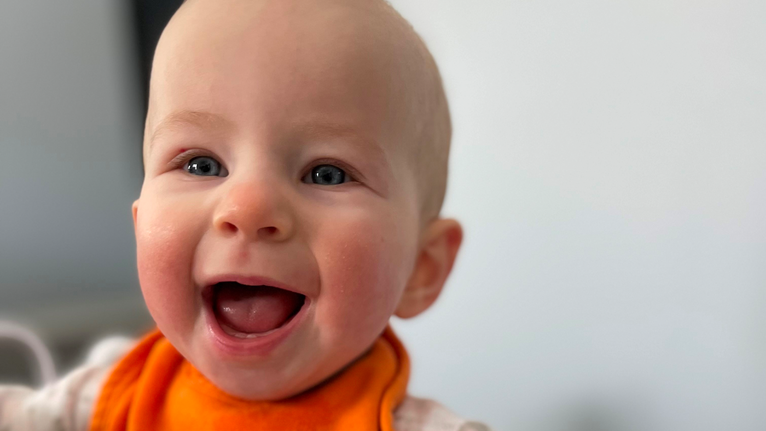 Infertility is the inability to get pregnant and is diagnosed after one year of carefully timed intercourse resulting in no pregnancy.  In the United States, among heterosexual women aged 15 to 49 years with no prior births, about one in five are unable to get pregnant after one year of trying according to the Centers for Disease Control and Prevention. Infertility is not only a woman’s problem—both men and women can contribute to infertility.

Pieces of the Fertility Puzzle

UC Health’s mission is to provide advanced reproductive, endocrine and fertility care in a supportive, compassionate and patient-centered environment, using a personalized approach to provide comprehensive planning toward the diagnosis and treatment of gynecologic and fertility issues.

Every patient and couple are unique, and treatment plans are tailored to fit the specific needs for that individual patient or couple. From medications to minimally invasive procedures, plenty of options are available to help guide fertility journeys.

Your fertility depends on if you can ovulate. This is when an egg is released from an ovary. If you are not ovulating, you may be given hormone medicine to help.

Hormones are chemicals that your body makes naturally, and each type of hormone has its own function. In some cases, hormones are used for assisted reproductive technology (ART). Hormone medication can help:

Ovulation induction (OI), or controlled ovarian hyperstimulation (COH), is often one of the first treatments recommended to patients and couples with fertility issues. Ovulation induction is the use of fertility medications to help stimulate the recruitment of egg(s) development and/or trigger ovulation. These medications can either be given orally (by mouth) or by injection. Pelvic ultrasound scans and blood tests to measure hormone levels assist with monitoring egg(s) development to determine when one is most fertile and likely to ovulate.

Intrauterine insemination (IUI) is the process of placing sperm into a woman’s uterus at the time that an egg is released from the ovary (ovulation). Sperm used during the IUI procedure are typically washed, and can either be obtained from the woman’s male partner or from a sperm donor. Washed sperm—or sperm that is separated from the fluid in which it swims (seminal fluid)—makes the sperm more mobile and increases the number of moving sperm within the reproductive tract. The greater the number of moving sperm means the greater the likelihood that sperm will locate an egg.

IUI is used for a variety of conditions, including male infertility, cervical or mucous problems, conditions that cause women not to release an egg, such as Polycystic ovary syndrome (PCOS) and unexplained infertility. For many patients and couples undergoing IUI, the use of hormone medications is needed and/or recommended to enhance a woman’s fertility.

During the in-vitro fertilization (IVF) process, eggs are stimulated to grow with injectable fertility medications, removed from the ovaries by procedure and fertilized with sperm in the lab. The fertilized egg, or embryo, is later placed in the woman’s womb.

Jenn Wagner was 38 years old when she and her husband, Scott, married in October 2015. They immediately began trying to start their family, and after natural conception did not work for six months, Jenn sought treatment locally near her home in Wisconsin.

Because her IVF treatment would be funded by her employer’s health plan, Jenn was given a short list of clinics to consider. The closest clinic to their home was the UC Health Center for Reproductive Health, with Suruchi S. Thakore, MD, medical director of in-vitro fertilization at UC Health and assistant professor in the Department of Obstetrics and Gynecology at the University of Cincinnati College of Medicine as her provider.

For many of our patients and couples, not being able to conceive despite various fertility treatments, is a challenging obstacle.

In late 2017, Jenn and Scott Wagner traveled from Wisconsin to UC Health’s West Chester Campus for the first time. Their visit ended with a plan for their first round of IVF to begin in early 2018. In August 2018 after four failed IVF attempts, Jenn believed it was clear that her body was not going to produce enough healthy eggs to create embryos.

The UC Health Center for Reproductive Health offers specialized third-party reproduction solutions for those individuals and couples who may benefit from egg/sperm donor or a gestational carrier’s assistance. According to the American Society for Reproductive Medicine, third party reproduction refers to the use of eggs, sperm or embryos that have been donated by a third person to enable an infertile individual or couple to become parents. The use of donor eggs, sperm or embryos can then be used in ART (assisted reproductive technology) procedures such as IUI and IVF. This also includes gestational carrier arrangements.

Another couple, Troy and Scott, always wanted to have kids, but they weren’t sure how to make that dream a reality.

“As a gay couple, our situation was unique,” they shared. To conceive, Troy and Scott needed the help of both an egg donor and gestational carrier.

While marching in the Cincinnati PRIDE Parade, they mentioned to their friend their desire to have kids. This friend later reached out to them, and they all met for dinner.

“She shared she felt she was meant to help us with our journey,” Scott shared, “and she offered to be our gestational carrier.”

Highly recommended by friends, Scott and Troy reached out to Dr. Michael Thomas, chair of the Department of Obstetrics and Gynecology at UC Health and professor at the University of Cincinnati College of Medicine, for help. They sat down with Dr. Thomas, their questions were answered, and they were referred to the UC Health Center for Reproductive Health in West Chester.

Their fertility journey initially began in late 2017, when Scott and Troy used an anonymous fresh-egg donor to create embryos using their sperm. Egg donation is when a woman elects to give her eggs to another individual or couple in the hopes of helping them become pregnant through in-vitro fertilization. Both egg donation and sperm donation, when a male voluntarily gives his sperm in the hopes of helping a woman or couple to become pregnant, can be done anonymously or as a directed (known) donor.

Egg donation assists individuals who otherwise are not able to conceive and/or those who may suffer or have experienced the following:

The initial journey for Troy and Scott was tough, having to synchronize the egg donor and their friend Stephanie’s cycles. By administering specific hormones to start both menstrual cycles at the same time, the lining of the recipient’s uterus is ready to receive the embryos created and nourish them.

“We transferred the first embryo in February 2018 and our beautiful baby girl was born in October,” Scott and Troy shared. 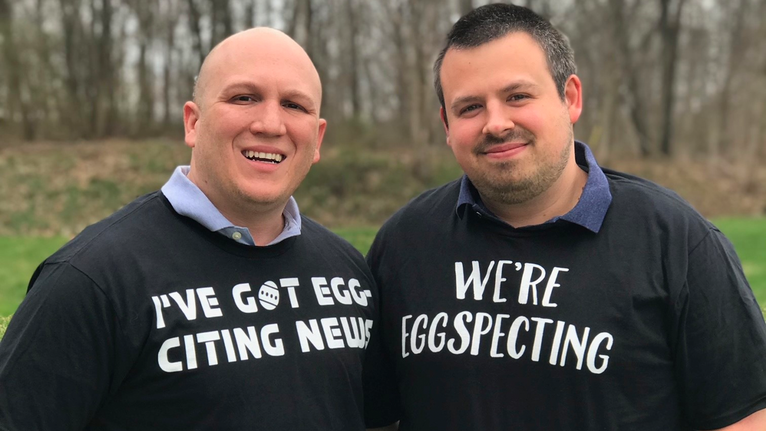 For many patients and couples receiving IVF, more embryos are often created and cryopreserved (frozen) than are used to successfully grow a family.

Embryo donation involves using another individual’s or couple’s embryo(s) that was produced from previous IVF cycle(s) in order to conceive. The remaining embryo(s) can be donated, providing a unique opportunity to help other individuals or couples experience pregnancy.

“Learning about embryo donation from Dr. Thakore was very uplifting,” Jenn said. “It gave us hope.”

Jenn and Scott entered into a match with donated embryos from two different families, however neither of the embryo transfer attempts resulted in a pregnancy.

While Jenn and Scott did not have had any embryos remaining, someone else did.

Jenn knew that her first cousin, Stela Burdt, from Minnesota, and her husband, also named Scott, had stored frozen embryos after receiving fertility treatment years before.

Even though her heart was broken, Stela compassionately decided to donate the gift of life to Jenn and Scott. Jenn and Scott were amazed by her selfless gift to them.

“After our experience with the Center for Reproductive Health, we chose to continue our treatment there for the frozen embryo transfers,” Jenn explained. “Even when there were local fertility clinics in our area that we could have worked with, we chose UC Health.”

The frozen embryos were transferred to West Chester, Ohio, and on Dec. 10, 2020, Jenn had her first embryo transfer.

Jenn and Scott asked many questions and were patient with the embryo donation process. While it may not be the right choice for everyone, knowing that it exists as an option can be life-changing.

And it was for Jenn— the couple soon learned that Jenn was pregnant and delivered a healthy baby girl Savannah on Aug. 1, 2021. They affectionately call her “Savvy.” 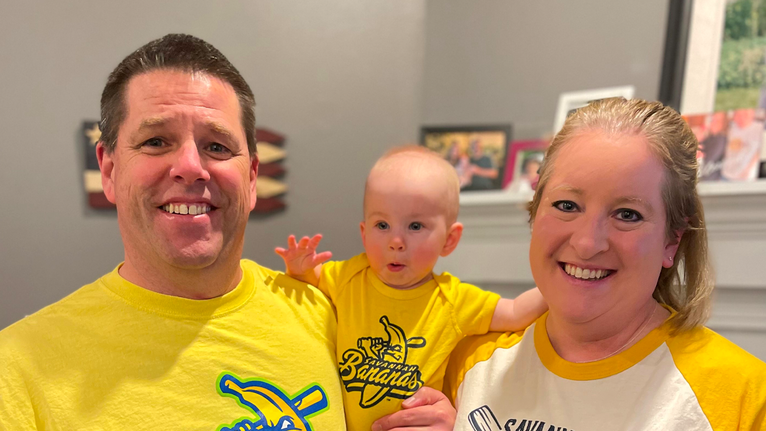 Eggs, sperm and embryos can be frozen and stored in a cryogenic chamber until a patient is ready to use them, when they are then thawed and implanted into the uterus using ART procedures when ready to start a family. Michael Thomas, MD shares that the most common reason patients freeze their eggs is a cancer diagnosis or a potentially life-threatening medical condition, that takes them through intensive medications or treatments, such as chemotherapy and radiation, that may compromise their future fertility.

Each year, more than 140,000 people are diagnosed with cancer during their childbearing years. At the Center for Reproductive Health, we tailor the fertility sparing treatment for each individual, which can include semen, embryo, oocyte (egg) and ovarian tissue banking to save for future use, as well as surgical transposition and medical suppression.

The UC Health Center for Reproductive Health is proud to be a part of the Oncofertility Consortium, which is a nationwide program overseen by the National Institutes of Health and is designed to explore the reproductive future of cancer survivors. Our center is one of 50 participating sites, and our patients have access to the latest clinical care initiatives and translational research of fertility preservation.

A partnership between the oncologist and the reproductive endocrinologist is important for fertility preservation, as future fertility is often still an option after cancer care.

Sometimes, a patient just isn’t ready to have a child in their 20s or 30s.

Freezing eggs at a younger age gives women a greater opportunity to have children in the future, as those eggs have a lower risk of miscarriage or age-related genetic problems. Some patients also choose to freeze eggs into their early 40s.

In order to freeze eggs, patients take medications to stimulate the ovaries, which leads to the production of multiple eggs available for removal. The patient then undergoes a minor procedure under anesthesia to remove the eggs.

The eggs can then be frozen alone or fertilized by donor or their partner’s sperm to be frozen as embryos. Dr. Thomas shares embryos have a more successful thaw than eggs alone, that option more appealing to some patients. 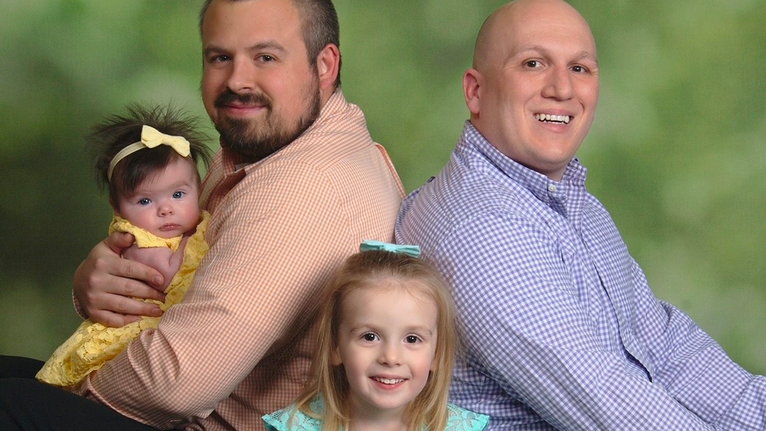 Scott and Troy returned to the UC Health Center for Reproductive Health in late 2020 with the desire to expand their family using their previously frozen embryos created from the first egg donor IVF cycle.

The second embryo was transferred in April 2021 with the support of another friend as a gestational carrier, and their second beautiful baby girl was welcomed in early 2022.

The UC Health Center for Reproductive Health is the only comprehensive academic patient care center focused on fertility and reproductive disorders in the Greater Cincinnati and Northern Kentucky area.