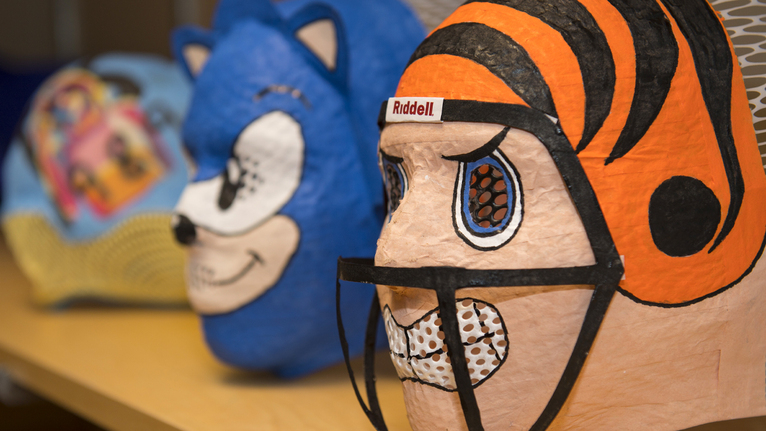 Dale James, radiation therapy supervisor at Cincinnati Children’s Hospital Medical Center/UC Health Proton Therapy Center, doesn’t think of himself as an artist. The 54-year-old also doesn’t think of himself as a hero, even though what he does helps little patients at the center who are battling big cancers every day. James, who has been at the center since its opening in 2016, paints elaborate, beautiful characters on the masks of pediatric patients from Cincinnati Children’s who must wear them to receive radiation treatment, sometimes every day for months of their lives.

“I can’t draw a straight line with a ruler, but this happens when I pick up a paint brush,” he says, gesturing to one of his masterpieces. “I’m pretty creative working on cars and hobbies, so maybe it goes hand-in-hand.”

James, a radiation therapist for 23 years, has been sharing this talent with patients throughout the country for around 21 years. Prior to coming to Cincinnati, he was a therapist at Loma Linda University Medical Center in Loma Linda, Calif., and California Protons Cancer Therapy Center in San Diego. He decided to come to Cincinnati when the new facility opened, and he saw an opportunity to work with a children’s hospital.

Proton therapy is a form of radiation treatment used for various types of pediatric and adult cancers. A major advantage over traditional forms of radiotherapy is its ability to deliver radiation to a tumor while more effectively limiting the exposure to healthy tissues.

The facility—a joint effort between UC Health and Cincinnati Children’s—is only one of about 28 of its kind in the U.S.; it houses the world’s only gantry (treatment room) dedicated to research, where experts can determine the best way to use this precision therapy. 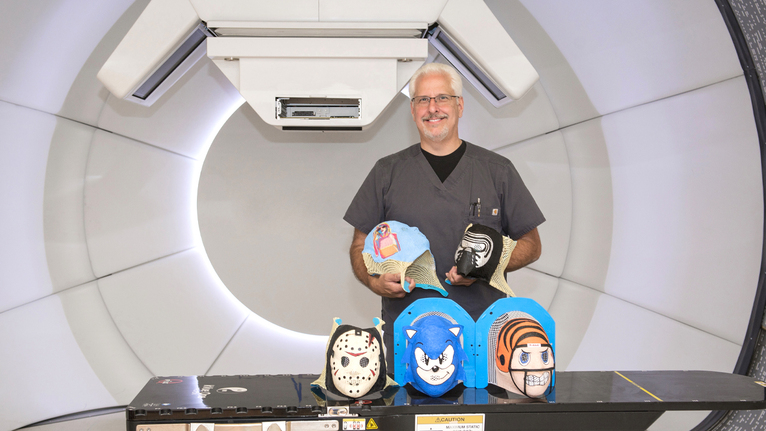 “The first mask I ever did was Mickey Mouse,” James says, recalling all of the different genres and styles he’s covered in painting 500 masks over the years. “I recently did a Jason mask from Friday the 13th—it was my first horror-themed mask. I really want to do a zombie one day.”

He works with the child life specialist and the simulation therapists to find out what each child likes and surprises them with these creations to add some fun to a very serious and scary situation.

“I try to make it a game,” he says. “And I can do this with a 50-cent roll of medical tape and a bottle of paint. It’s not that much work for the amount of joy it can bring.”

James says until about four years ago, he paid for all of the materials needed for the masks from his own pocket, but when the benefits of his work was recognized by his employers, they began picking up the bill.

Patients are able to keep the mask after treatment is completed; one family even used the mask as a Christmas tree topper, to celebrate a huge hurdle they’d overcome during the year.

“It just makes you feel good when you see things like that,” he says. “And I’m just a big kid.”

“I’m so happy to be here and working with patients in Cincinnati. I owe so much to UC Health and Cincinnati Children’s for giving me the opportunity to work at such an amazing place and for the support they and my co-workers have given me. I think everything happens for a reason, and this is the reason I’m here.”