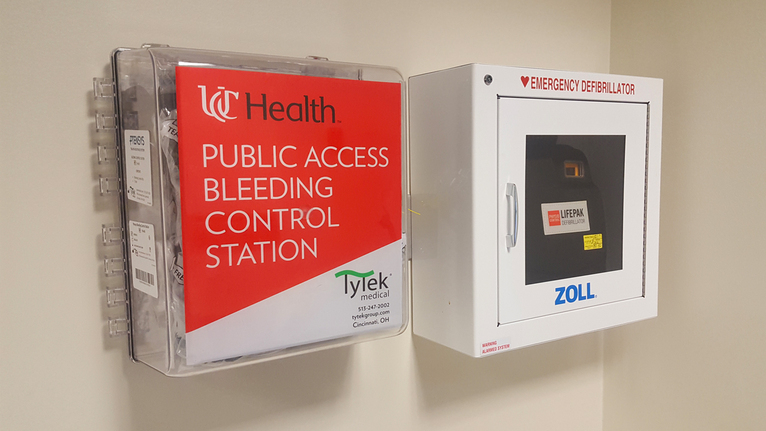 In a trauma incident, controlling bleeding is one of the most important actions to take to prevent loss of life. Stop the Bleed, a national program that provides training on tourniquet techniques to save lives on the scene, launched in October 2015 by the American College of Surgeons Committee on Trauma, and has successfully trained thousands.

Now, as part of the Stop the Bleed program, bleeding control kits are being installed at UC Medical Center and other UC Health locations. So far, 100 kits, containing military grade tourniquets, gauze and vinyl gloves, have been installed at UC Medical Center and the Ridgeway Tower at 3200 Burnet Ave., with installations in progress at the Daniel Drake Center for Post-Acute Care and West Chester Hospital. All the kits are expected to be in place by next month.

“Each kit at UC Medical Center is located near a wall-mounted automated external defibrillator (AED) and has eight individual kits for bleeding control,” says Maria Friday, director of emergency management for UC Health, which covered the costs of the kits. “With events like the Las Vegas shooting in October 2017 and the Fountain Square shooting last year, it reinforces the importance of learning bleeding control techniques to potentially save lives.”

The kits are the result of an initiative by the Department of Emergency Medicine and the Division of Trauma, Critical Care, and Acute Care Surgery at the UC College of Medicine. The kits were developed by a firm located in Blue Ash, Tytek, which relied on the expertise of Dustin Calhoun, MD, associate professor in the Department of Emergency Medicine and medical director for Emergency Management at UC Health, to determine what materials and items should be included in the kits.

Menninger says one of the key components of the Stop the Bleed training is encouraging people and preparing them with the right tools and skills to help someone who has uncontrolled and life-threatening bleeding.

“For a while in the past, we were taught that tourniquets were bad, that they could cause someone to lose a limb,” Menninger says. “A lot of people still think that tourniquets should be the last treatment for severe bleeding. We’re trying to change that mindset and say if you have a tourniquet, grab it and do it first before anything else.”

She says there are indications that the public is becoming more educated on using tourniquets on someone who has uncontrolled or life-threatening bleeding.

“These are rough numbers, but in 2017, we only saw about eight to ten tourniquets come in on patients to the UC Medical Center emergency department, but in 2018 we saw those numbers in the high 80s,” Menninger says. “You can see with the education and the equipment getting out in the community, and even equipping our police officers and first responders with these tourniquets, that they are getting used more to save people’s lives.”

For more info about Stop the Bleed, or to get training, click here.