The Connection Between Vision and Stroke

Carolyn Benford was at work when she realized that her vision was distorted – she could not see to her left with either eye. 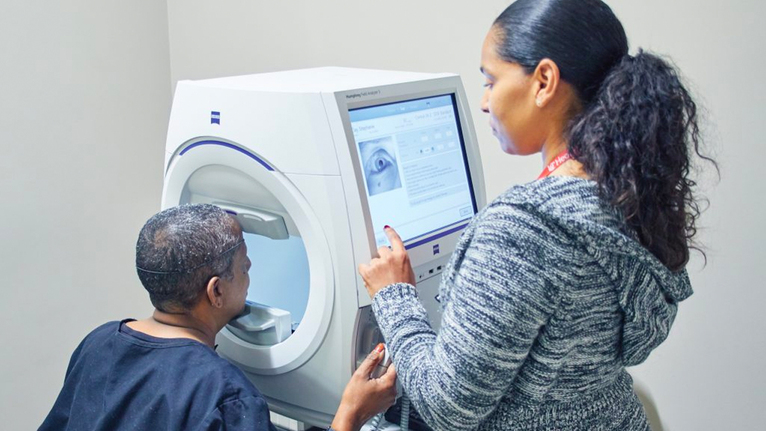 “I could visualize everything as long as I was looking forward, but coming from the left, it was like a gray cloud,” says Carolyn.

Since her central vision was fine, Carolyn carried on normal life for about a week before seeking out Michael Prokopius, MD, a UC Health ophthalmologist at West Chester Hospital and associate professor of ophthalmology at the University of Cincinnati College of Medicine.

After performing diagnostic testing, technician Christina Lopez discovered that Carolyn was not seeing to the left with either eye. “We knew immediately that this issue wasn’t associated with the eye, but was actually a neuro-ophthalmology concern,” says Dr. Prokopius.

“Carolyn was not exhibiting any other symptoms except for the loss of the left visual field. She experienced no numbness or speech difficulty. The eyes are conduits for what the brain is seeing through the occipital lobe, which is known as the brain’s visual process center,” says Dr. Prokopius.

Dr. Prokopius examined Carolyn and confirmed that she was not seeing to the left with either eye. He performed a confrontational visual field test in which the patient looks directly at the doctor’s nose while the doctor tests each quadrant in the patient’s visual field. The patient is asked to count the number of fingers the doctor is showing.

“We performed a full eye exam, and her central vision was perfect. Our suspicion was that about eight days prior to the visual exam, Carolyn had experienced a stroke.”

Dr. Prokopius immediately called the West Chester Hospital Emergency Department and described the issue. Carolyn needed to be evaluated immediately. It could be a stroke in evolution, where more damage occurs as time passes.

Carolyn was personally escorted to the Emergency Department by Dr. Prokopius where she underwent tests including an MRI, which shows intricate neurologic details. The results confirmed Dr. Prokopius’ suspicions of a stroke.

“If we catch the stroke early enough (within three hours of symptom onset; four and a half hours for some patients) we can administer TPA, a medication that dissolves clots to help prevent further damage,” says Emily Nurre, MD, UC Health neurologist at West Chester Hospital and associate professor of neurology at the UC College of Medicine. “Sometimes we can intervene with other measures within 24 hours of onset and save the area of the brain which is in the process of being damaged but is still salvageable. Afterward we cannot reverse the damage, but we focus on regulation of temperature, hydration and blood pressure to help keep further damage from occurring.”

Dr. Nurre also notes that if physical, occupational and speech therapy are implemented early and often, it can help the brain regain abilities that were lost.

Carolyn wants others to know that vision changes can be an early warning sign of a stroke. “I am so grateful because I can still see, I can see the clouds in the morning, I can see the sun,” says Carolyn.