When a Tremor's Cure is in the Mind

Through most of medical history it was known as “psychogenic tremor,” an uncontrolled shaking of a hand or limb that was unrelated to any detectable neurological abnormality. The cause was unknown. It was thought to be “bizarre” and described by some as “a movement disorder that isn’t real.” 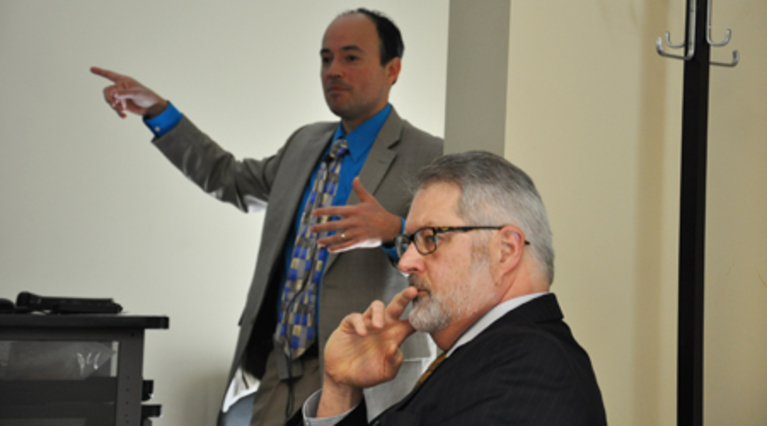 Today it is better known as functional tremor, and it is every bit as real to the people who experience it as it is to the clinicians who want to help it go away.

Although the origins of functional tremor remain imperfectly understood, researchers at the University of Cincinnati Gardner Neuroscience Institute believe they are a step closer to knowing how it might be successfully treated.

Treating functional tremor with cognitive behavioral therapy, or CBT, had a positive impact on nearly 80 percent of patients who took part in a small pilot study, say co-investigators Alberto Espay, MD, MSc, and Scott Ries, MSW, LISW. CBT is an evidence-based process that helps patients understand how their thoughts and emotions influence behavior.

Espay and Ries explained their results last week at an educational grand rounds session for members of the Department of Psychiatry and Behavioral Neuroscience, the UC Mood Disorders Center and the James J. and Joan A. Gardner Family Center for Parkinson’s Disease and Movement Disorders. Espay is director of the Gardner Center, and Ries is a clinician at the Mood Disorders Center.

A tremor is an uncontrolled shaking of a body part, usually the hand, arm or leg. A functional tremor, unlike a parkinsonian tremor or essential tremor, differs in that it is not caused by an underlying structural disorder in the brain.

It must be diagnosed, Espay says, by a neurologist, who is trained to determine its hallmark features and whether or not it can be explained by any one of a broad range of conditions. “These functional tremors are inconsistent and incongruent with the full gamut of organic tremors,” Espay says. “They don’t fall within the spectrum of what you’d expect in such tremors as Parkinson tremor, cerebellar tremor, etc.”

A key to diagnosing functional tremor, Espay says, involves distracting the patient with a complex task to see whether the tremor changes or goes away. A key to treating it is the patient’s willingness to accept the diagnosis and understand that additional brain scans or doctors’ opinions will not turn up an alternative cause of the problem.

Ries says that when people come to see him because of a functional tremor, “I Iike to frame it as a software problem rather than a hardware problem. People get that. I say there’s nothing wrong with your brain.”

In the pilot study, Espay and Ries worked together to select a small group of patients who were willing to try 12 sessions of CBT in an effort to control their tremor. Ries settled on CBT because it is an affordable and practical therapy. He theorized that CBT could be an effective treatment for functional tremor because it is a highly successful treatment for panic disorder. The conditions have similarities, including an “uh oh” moment when the fear of panic or tremor amplifies the outcome.

The study could be criticized, Espay says, because it was small, all patients selected were open to trying the therapy, and there was no control group. “Nevertheless, if you consider patients in remission, nearly 80 percent of the study participants were helped.”

Espay and Ries agree that patients are unlikely to be treated successfully for functional tremor if they are not ready to embrace a mindful cure.

In these cases, Espay says, there is an internal “conflict of interest” that interferes with treatment. “We see three scenarios,” Espay says. “The individual is on disability or pursuing disability payments. The individual is involved in litigation or considering it. Or the individual is so well supported by the family that he or she is happy with the current situation. If these cases exist, we cannot help them, and they will continue going through the system without getting better.”

CBT’s potential as a therapy for functional tremor is important not only because of the hope it offers patients, but also because it promises significant cost savings.

“If even a fraction of these patients are no longer doctor shopping or going through MRIs and EMGs, we can potentially save billions of dollars,” Espay says. “I view this as low-hanging fruit for the healthcare system. Functional tremor leaves patients incredibly disabled, and it is markedly expensive.”