Women of the Skies 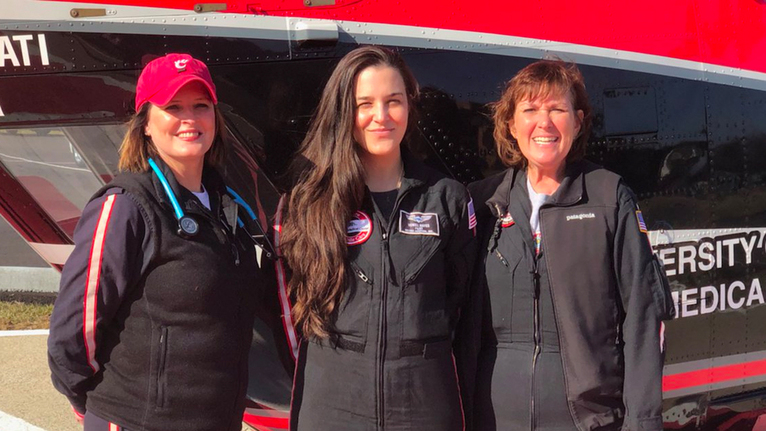 On March 22, all three women made history as part of the first all-female flight crew in the 35-year-history of UC Health Air Care & Mobile Care.

For Hayes, that day felt like any other: she checked the crew list and thought to herself, “Oh, cool—I have a really great crew today, because they’re really experienced.”

“We didn’t realize until later that it was all female,” Hayes said. “It felt normal, which was a good thing— everything went smooth that day, as it should be. Really uneventful, and just a really great day.”

Deimling said it was “exciting” to fly with the first female pilot in her 35 years with UC Health Air Care & Mobile Care.

“She’s going to be an excellent pilot with our program because she’s very calm, she’s very skilled and has a lot of confidence—not just as a female, but as a pilot,” Deimling said.

Hayes, who grew up loving the sound of helicopters as they flew over her home, said she’s used to being one of few women in a male-dominated field.

“When I was flying airplanes, there were 30 students in our class. I was one of two females that finished the course. And then when I went to the helicopter side, there were even fewer females,” she said.

Hayes has been flying for 12 years and most recently flew tour helicopters in the Las Vegas area. She said the move to medical transport has been rewarding.

“It feels like I’m flying with a purpose now.”

That sense of purpose and mission is why Deimling has stuck with medical transport for 35 years.

“I love it. I can’t imagine doing anything else,” Deimling said. “We get a wide variety of patients, and you’re always learning something. I’m learning something new every day from the physician or advanced practice nurse I work with—they’re amazing.”

Unlike many other medical transport services, UC Health flies with an emergency medicine physician or advanced practice nurse aboard every flight, in addition to the pilot and flight nurse. UC Health Air Care & Mobile Care serves about 1,300 patients requiring advanced medical and transport services every year. That includes everything from landing at the scene of a motor vehicle accident, to transporting critically ill patients from one hospital to another.

Every day is exciting—and every flight presents the opportunity to provide advanced, lifesaving care where it’s needed most. For Lakeberg, it’s an honor to help expand horizons for other young women who might see air medical transport as a calling one day.

“Aviation is still a very male-dominated industry, so to have our first female pilot is pretty cool. I love that we are in a time that we are breaking down the stereotypical molds. I think it is neat that we are beginning to see more women in aviation and more men in nursing. I love it. All of our pilots are amazing and truly the best at what they do. They all have to meet a strict set of requirements to get the job, whether you are male or female.”