The Minds Behind Neurocritical Care 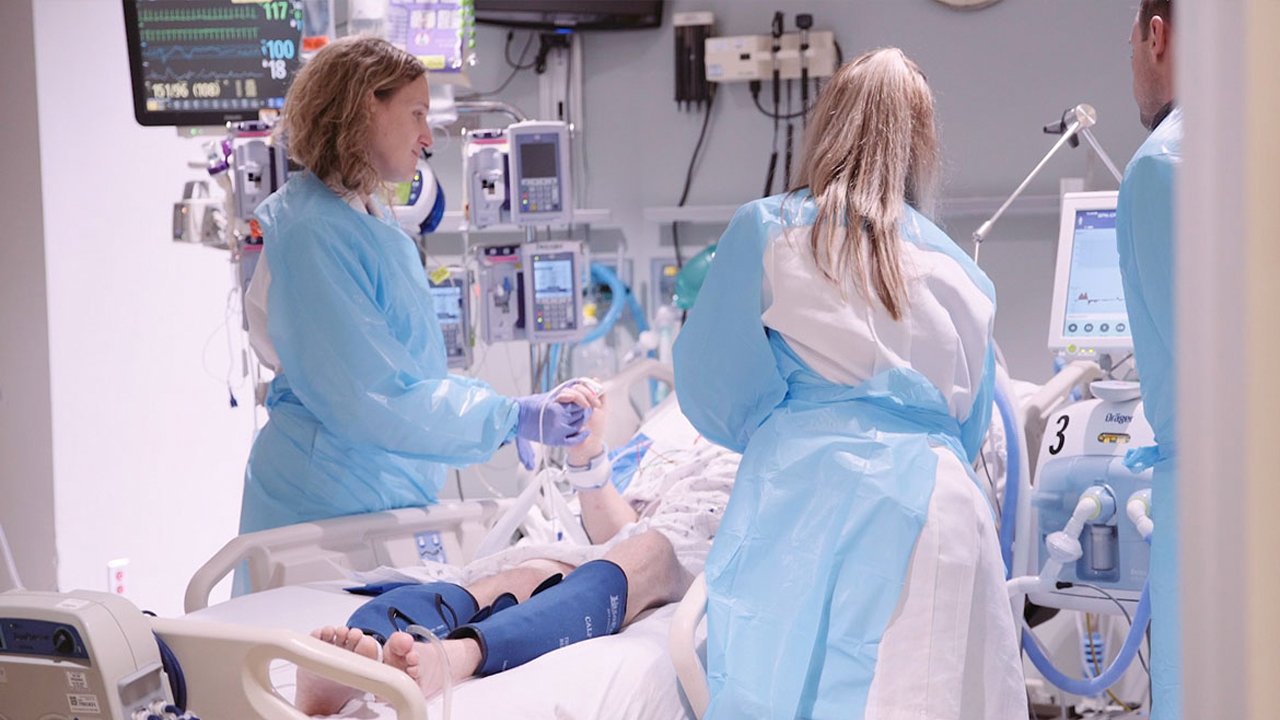 “Hello, good morning! Can you wake up for me for a minute? Can you tell me where you are? UC, that’s right!”

It’s a Tuesday morning in July, and Simona Ferioli, MD, is starting rounds in the neuroscience intensive care unit (NSICU) at the University of Cincinnati Medical Center. Dr. Ferioli, a neurointensivist in the Department of Neurology and with the Neurocritical Care Program of the UC Gardner Neuroscience Institute, is accompanied by an interdisciplinary team as they go room by room to check up on each patient in the 12-bed wing.

“Can you open your eyes and look at all these beautiful faces here? How about I help you a little bit?”

Dr. Ferioli explains that sometimes stroke patients lack the ability to open their eyes, but once you help, they are able to keep them open. With some coaxing, the patient opens her eyes.

“Hi there! How many fingers am I holding up here? Very good, OK. Whose hand is this? Look at this hand, this nice nail polish? This hand must be yours.  Can you wiggle toes for me? All right.”

Dr. Ferioli notes aloud to the team some sensory neglect on both sides. She also comments that the patient’s arm is swollen from IV fluids, and says to the group, “Let’s keep an eye on this.” 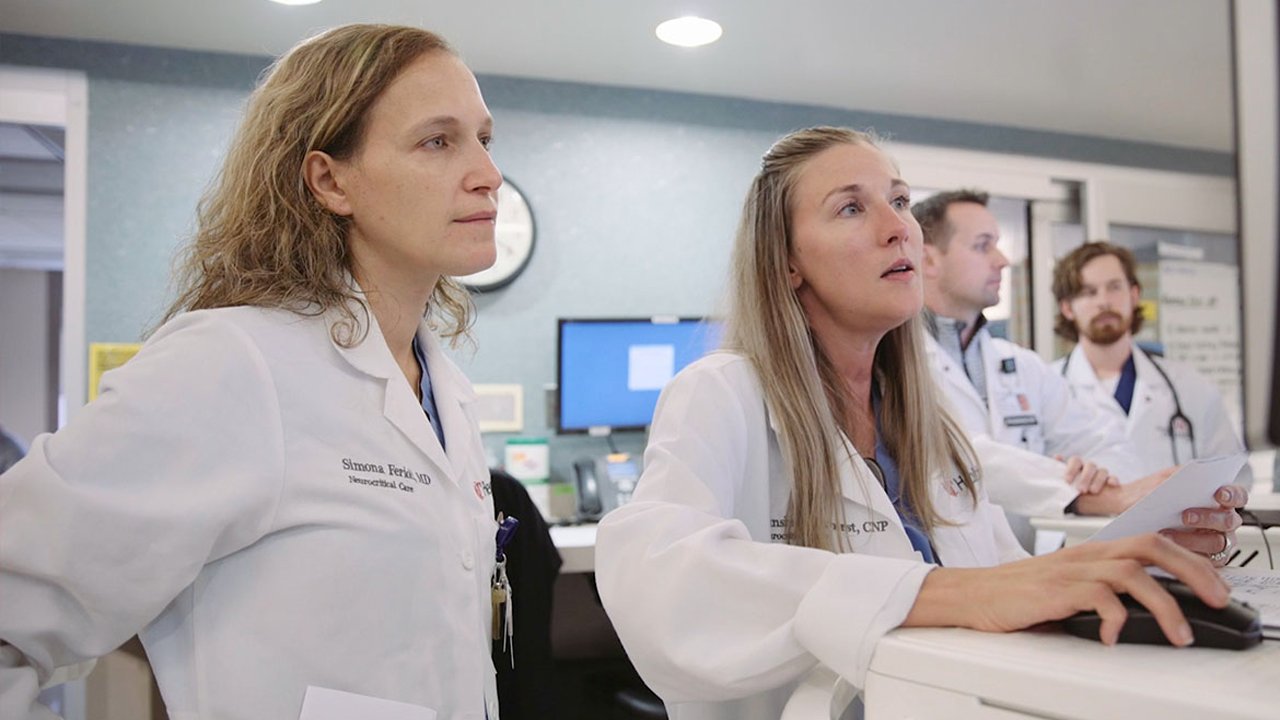 Prior to entering the room, Dr. Ferioli and team have reviewed the patient’s tests and scheduled labs while pulling up her brain scans on their roving computer stations. This is how Dr. Ferioli’s team of specialists approach every case—as experts studying the whole picture of each individual’s circumstances.

In this case, it’s a woman recovering from a stroke. This particular patient’s vitals are good today, but she’s been experiencing continued weakness, with episodes of bradycardia, or low heart rate. Korey, who is at the patient’s bedside monitoring for changes, tells the team that the patient has been able to say her name—but not answer where she lives or what day it is.

Dr. Trope, the ENT resident, asks the team, “Could she be a candidate for neurosurgery?”

Looking at her chart, Dr. Kircher says he does not see a surgical option here. As the fellow, who is training after his residency to specialize in neurocritical care, Dr. Kircher helps teach residents while learning from attending physicians like Dr. Ferioli.

Dr. Ferioli agrees and explains the evidence just isn’t there yet. “Surgery for intracerebral hemorrhage has had several trials, stretching over the last 20 years and without expected results.” She says that when looking at scans, you might be able to see the clot and think it’s an easy fix, but, “most of the research will show that you’re creating a secondary injury. It may look clean to us, but it’s actually pretty invasive.”

They discuss additional studies with more minimally invasive techniques being used after the patient is stabilized, some underway at UC Medical Center, where results are not yet published.

“To me, a surgery isn’t really supported by the research we have. It would be more of a last life-saving effort. I think for her: we watch and we wait,” says Dr. Ferioli.

This kind of cerebral discussion is common among the rounding team. In neurocritical care cases where you can’t always see the problem, it takes the expertise of a multidisciplinary team along with the evidence of decades of research to bring the best treatments to the most complicated cases in the NSICU.

That’s why patients with the most advanced neurologic illnesses and injuries have the best chance for recovery in academic health systems like UC Health.

The team moves on to the next patient, a woman who suffered a fall and developed a subdural hematoma, or a traumatic injury with blood in her brain. She began experiencing seizures, as many as 79 in one day’s report.

“We are really happy with the way this brain activity looks today,” Dr. Ferioli tells the patient’s loved one who is quietly sitting bedside, holding coffee and a fast food breakfast sandwich. “We hope the medicine is kicking in and helping her seizures.”

To help her progress, the team had placed her into a controlled coma. The dichotomy of patients in the NSICU, Dr. Ferioli says, is that they are either awake or in a coma, the latter where more complications can arise.

“After we have addressed the neuro piece of the puzzle, then we deal with the complexities that come along with being in a coma, in a bed, for a couple weeks,” she explains.

At this phase is when Dr. Kircher and Dr. Ferioli would admit, patients are not so pretty— “All the tubes and machines tracking them and helping them, it can be a bit intimidating,” says Dr. Kircher.

Someone asks whether to order her a “football helmet”— their term for the protective gear patients need to wear once they are up and mobile following a craniotomy.

It’s quite common in a traumatic brain injury (TBI) for doctors to remove a small part of the skull in patients to relieve the swelling on the brain, and it can be months before a patient is well enough to have it put back in. Kircher says that the hospital can actually catalog and save the piece of your skull in deep freeze, for when you come back later to have it stitched back in.

Dr. Ferioli adds, “In the past, they used to suture it in your belly so you still had it with you until you needed it.” 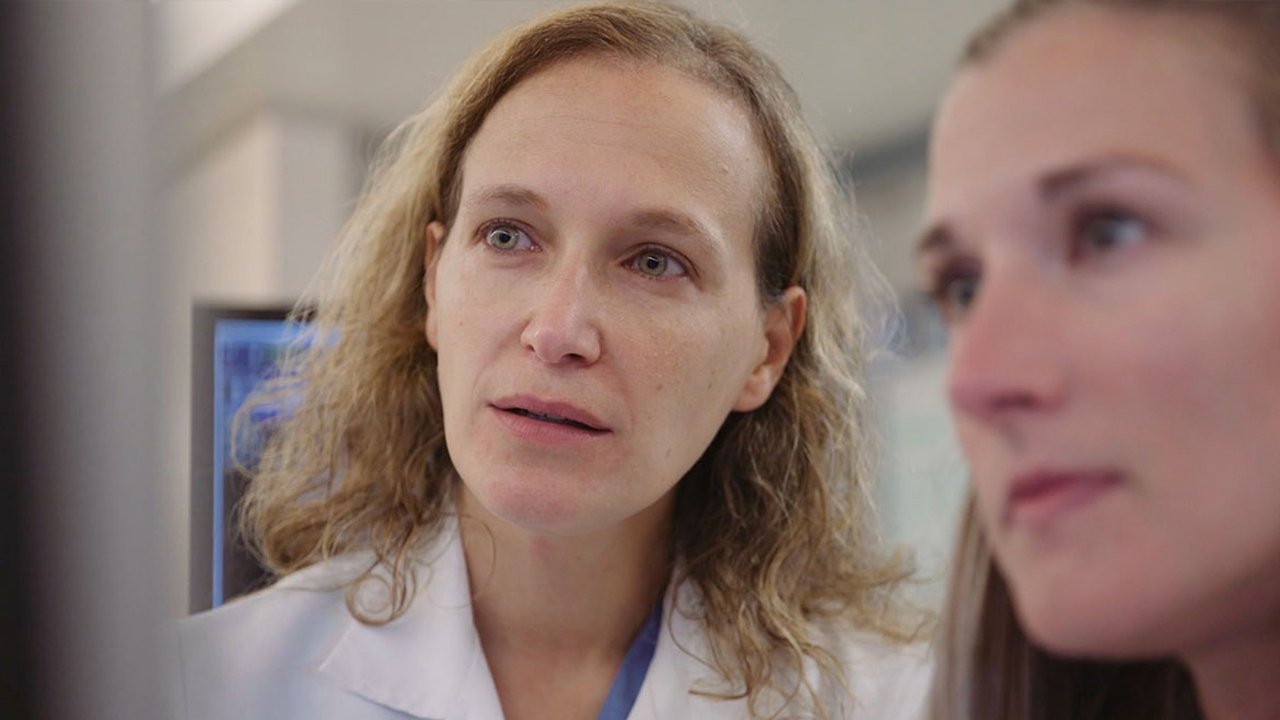 “I hope we are over-treating her seizures, and that they really did stop around 8 (last night). Maybe we can back off the medication a little bit. Can Sameer give us an update?”

Sameer Sharma, MD, an epilepsy fellow, is another part of the NSICU team, though truly behind-the-scenes. Dr. Sharma’s job is to monitor and produce daily reports of the patients who are on continuous EEG monitoring, tests that evaluate electrical activity in the brain.

“He works with clinical teams to help us find subtle changes—‘this is an evolving pattern,’ or ‘this could put someone at risk for seizing and not waking up,’” says Dr. Ferioli.

As an academic health system, UC Health is one of the only centers in the region to have continuous EEG, let alone specialists who can interpret the results.

“It’s a good example about why I love what we do, because it is like a big family, you know?” she says.

This makes a lot of sense when you learn that Dr. Ferioli herself is part of a big family – with six children to be exact, most recently she and her husband welcomed twin baby girls in June.

“And you can say that for every consultant we have, from the respiratory therapists who come bedside and make suggestions, to the nurses who set up the IV drips, having that communication is vital. I would not enjoy what I’m doing if I were in a place where it was just me, by myself. It is that teamwork that makes my job so rewarding.” 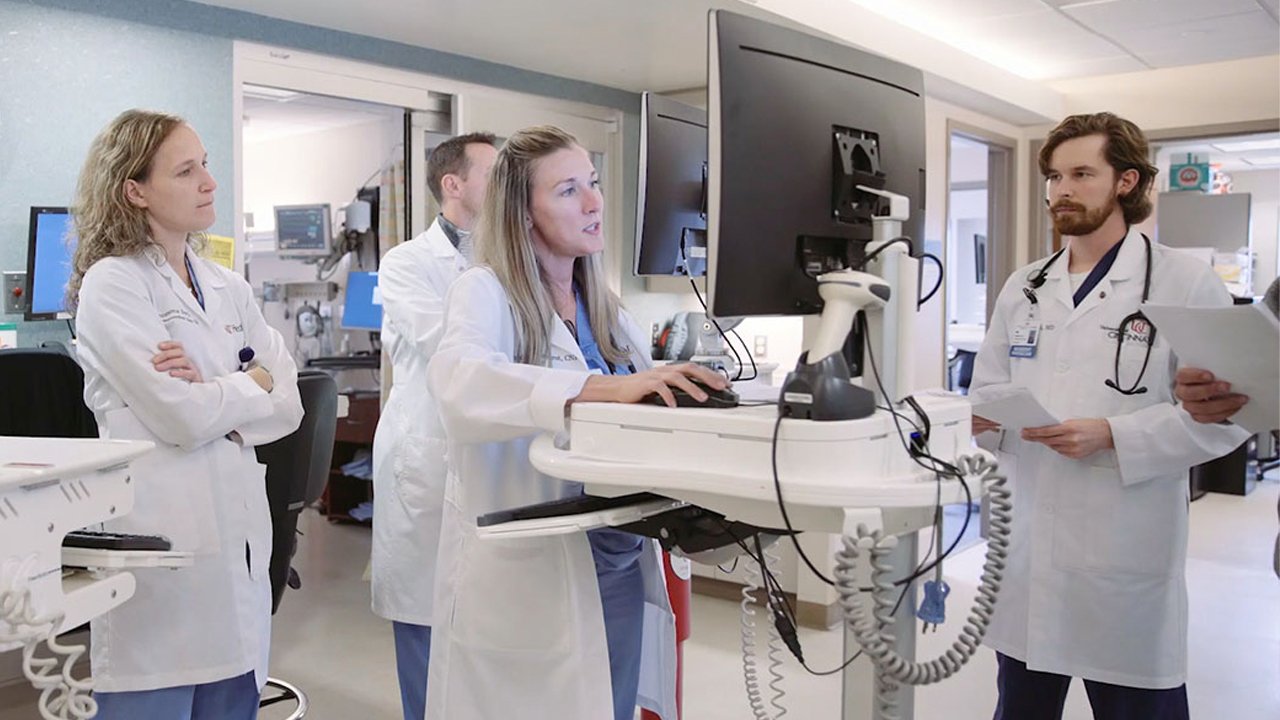 Of the patients seen in the NSICU, almost half have had an acute ischemic stroke, which occurs when the brain’s blood vessels become blocked. The neurocritical care team also commonly sees patients of traumatic brain injuries, as well as intracerebral hemorrhages and seizure complications.

But the next patient on rounds is a bit more of what the team might call a “zebra” – something out of the ordinary of the strokes, TBIs and difficult-to-treat seizures that they see.

A young man with complaints of neurologic issues, weakness and numbness in his arms and legs had seen three doctors already and had numerous tests done, only to be sent back home with no clear prognosis. He was admitted to the NSICU after his family brought him to the UC Medical Center emergency department.

Dr. Trope fills in the rounding team on what brought him here. She surmises that they are leaning towards diagnosis of a rare neurologic condition—one that can develop serious complications if not treated.

“It is rare and it is uncommon, so it’s not easy to recognize in the medical community but if not recognized it can be life threatening,” says Dr. Ferioli. “When your nervous system starts to lose control to the point where it intervenes with the respiratory system, literally taking your breath away, that can become a neurological emergency.”

Thanks to the depth of knowledge at an academic health system like UC Health, the neurocritical care team was able to pinpoint the issue and start treatment. 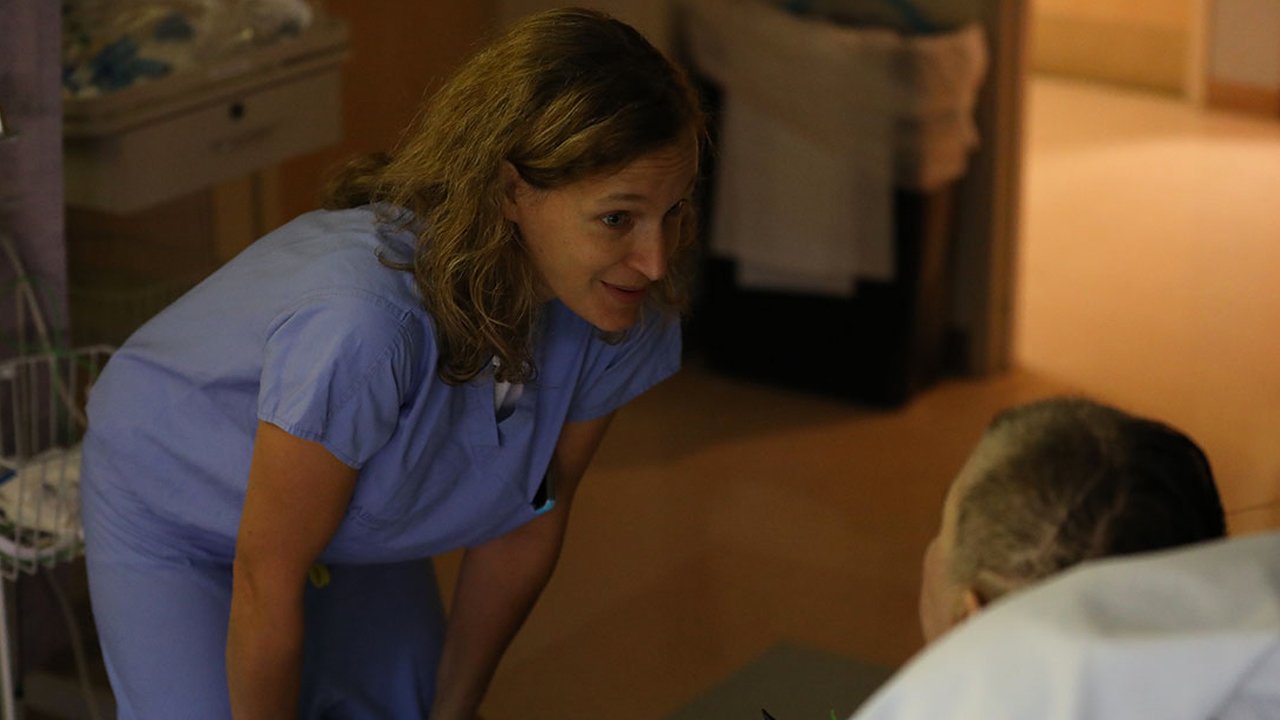 The resident adds they are closely watching his breathing overnight. He still cannot speak a full sentence without pausing to take a breath, and he’s having some difficulty swallowing.

But he is awake and can converse with Dr. Ferioli. His family is also in the room as she conducts a few strength and breathing tests. She notes his movements seem a bit easier than the day before.

The patient says he still feels tingling and numbness in his feet and arms, and also in his belly.

“But from my ear, your voice is about the same as yesterday. I’m glad you feel subjectively better, but we want to hear you better,” Dr. Ferioli says.

“After your tests came back, of all the possible things we were thinking yesterday, this diagnosis became more possible.” She goes over the treatment with patient and family how it works.

“Let’s all watch it very carefully, and if you feel you can’t keep up with your breathing, or your swallowing feels ‘stuck,’ those are things we’ll need to act quickly on, OK?”

The patient’s family thanks her.

Providing support  and hope for families when there are a lot of questions might be one of the greater challenges of neurocritical care. Every brain is different, and it can be hard for a neurointensivist to predict when and how much the brain will recover. This time can be stressful for families and caregivers, and even the doctors. But it’s another reason that having a team of neuroscience experts makes a big difference—they’re more equipped to answer these questions than anyone else. 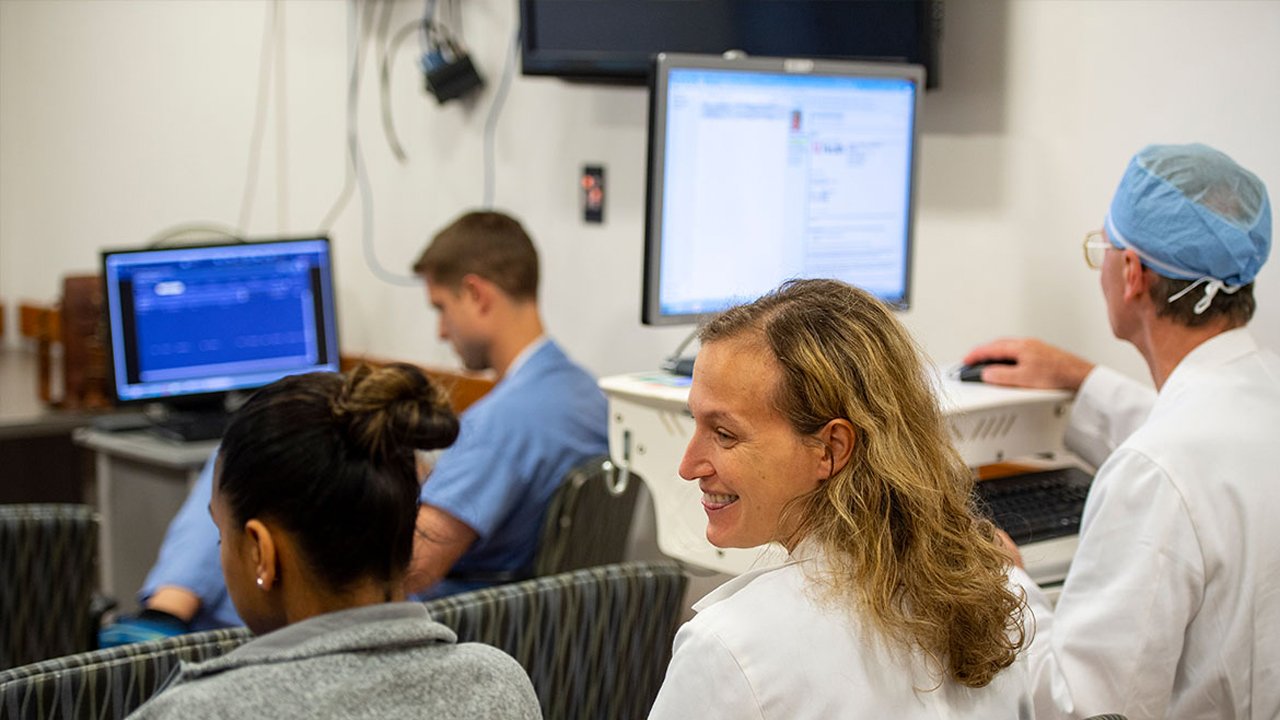 On other Tuesdays when she is not on hospital rounds, Dr. Ferioli makes a trip out to UC Health’s Daniel Drake Center for Post-Acute Care. It is often the next stop for patients who are well enough to leave the NSICU.

Even though on paper they are healthy and ready to leave neurocritical care, it is a new life for these patients and their families to navigate.

She likes checking in on the patients who have left the NSICU for rehab at Drake, to see how they are doing.

“Sometimes it can feel like they are welcoming home a whole new person. It can be difficult from a family or caregiver perspective, to have that patience.”

“I also have to do it for me, it gives me hope to see these patients on the road to recovery and not to just wonder, where do they go after leaving our unit?”

A couple weeks later, Dr. Ferioli and Dr. Kircher are happy to report that all three of those patients who were seen on rounds—despite some ups and downs and complications—are out of the NSICU and on their own roads back to recovery.

*Dr. Ferioli and Shaun are pictured in this story, but Dr. Kircher and Korey are not. Instead, pictured above are emergency medicine resident Jim Makinen, MD, and Sunshine Barhorst, certified nurse practitioner.