The Role of Emergency Management and Public Safety 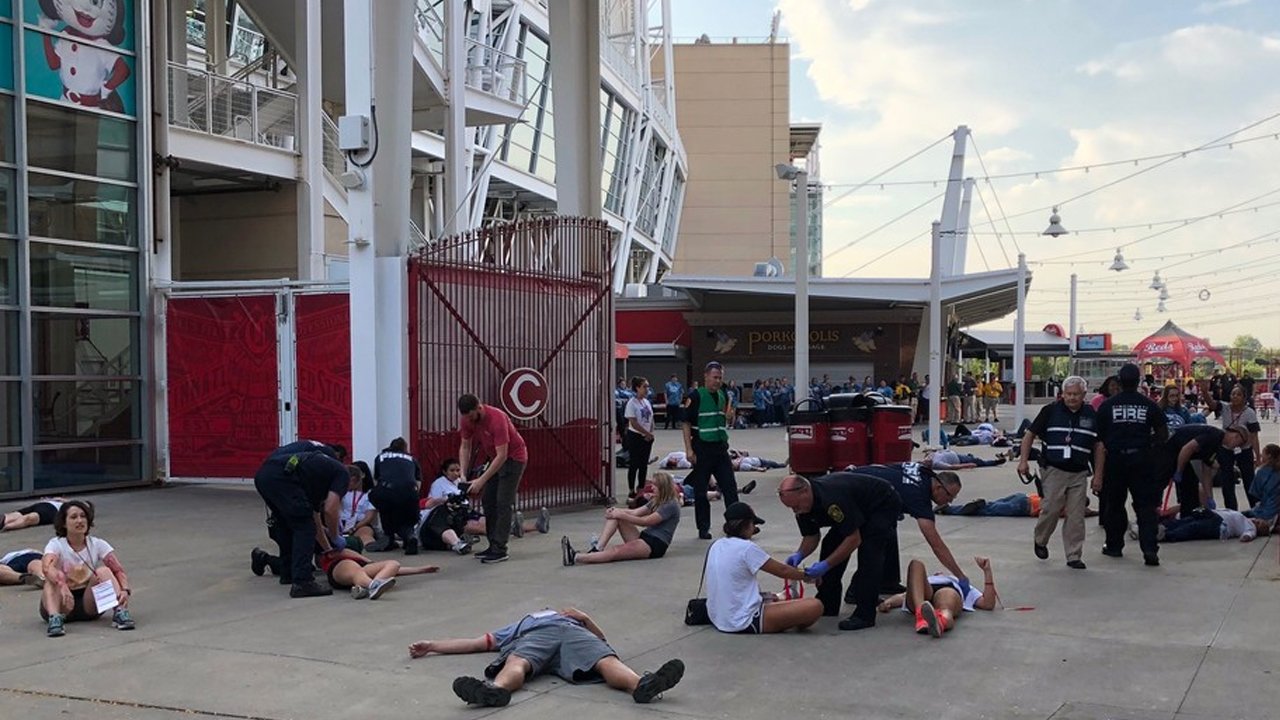 If a mass casualty ever occurs in Greater Cincinnati, every department at UC Health will need to be ready to step up. The simulation here in September 2019 allowed this to happen.

Organizations across Greater Cincinnati participated in a mass casualty drill on Sept. 19, 2019, responding to fictional reports of an incident at Great American Ball Park that tested the community’s response to a large-scale crisis.

Emergency management and public safety are two key groups involved in UC Health’s response to a crisis. Maria Friday is UC Health’s director of Emergency Management, overseeing the health system’s response at University of Cincinnati Medical Center, West Chester Hospital, Daniel Drake Center for Post-Acute Care and all of the ambulatory sites. She had a major role in the planning and execution of the drill.

“We’re it. We’re the only Level I trauma center, so we know patients will be coming to us,” Maria said. “It’s our responsibility as a community advocate to be prepared for worst case scenarios.”

In Maria’s six years at UC Health, she had never seen such collaboration from everyone involved. She knows that this will be crucial in the future if a real event like this occurs.

“The collaboration and teamwork was fantastic, along with everyone’s willingness to maybe make a mistake,” Maria said. “That’s how we get better and that’s how we learn—everyone kind of pushing their limits in their departments and finding that breaking point, and finding out how we can better prepare in the future.”

In addition to Emergency Management, Public Safety plays a key role in ensuring the drill, and a real life situation, would run smoothly.

Lt. Shannon Pryor has been with UC Health Public Safety for 10 years, working tirelessly to keep patients and staff safe. She assisted with managing the flow of traffic around the Emergency Department during the exercise.

Dozens of ambulances followed the metro buses. Parking garages on the campus reached 75% capacity. Maintaining the flow of traffic near the ambulance bay was critical to ensuring patients were treated quickly. Lt. Pryor oversaw this process and understood the realities of this exact situation occurring.

While there are things that need to be improved upon in the future, Maria and Lt. Pryor both agree that having involvement and the support of the community will be important moving forward.

“Everyone needs to know their role and what we need to do. We need to make sure operations will go smoothly,” Lt. Pryor said.

Last September’s mass casualty drill will forever remain a valuable experience for UC Health employees like Maria and Lt. Pryor. They had the opportunity to see what could go right and what could go wrong, and that knowledge will allow them to lead UC Health through any emergency in the future.