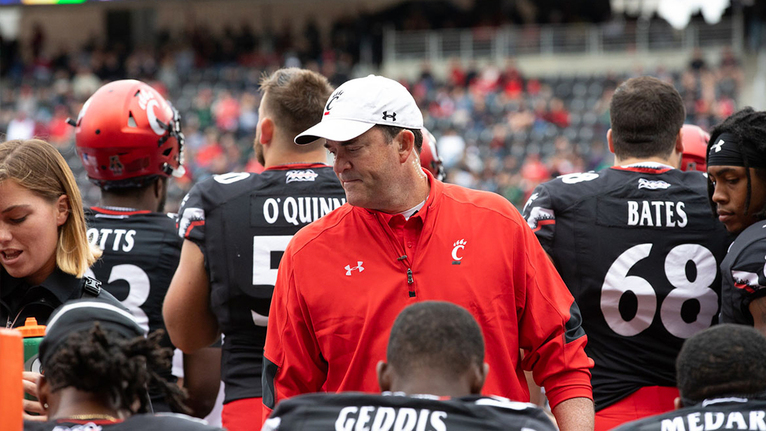 A single square lights up red.

The football player, eyeing it, moves his hand up along the electronic board that holds the tiny square-shaped button and pushes it. It beeps, signaling the player has successfully extinguished the red light.

Another square lights up in another quadrant.

At the same time, the athletic trainer by his side holds up a notecard:

The player pauses his quick movements, working the problem out in his head.

“Six,” the player blurts, returning his focus to the squares in front of him.

On the final day of the University of Cincinnati’s football training camp, the vision tests have reached their most difficult level.

For many of the Bearcats players, these tests have become the subject of friendly competition. Three boards are lined up side-by-side, each with squares arranged in a sunburst pattern around a small electronic screen that sometimes flashes words or math problems.

Who can set the record for the highest number of buttons pushed in a minute? Who has the fastest reaction time? 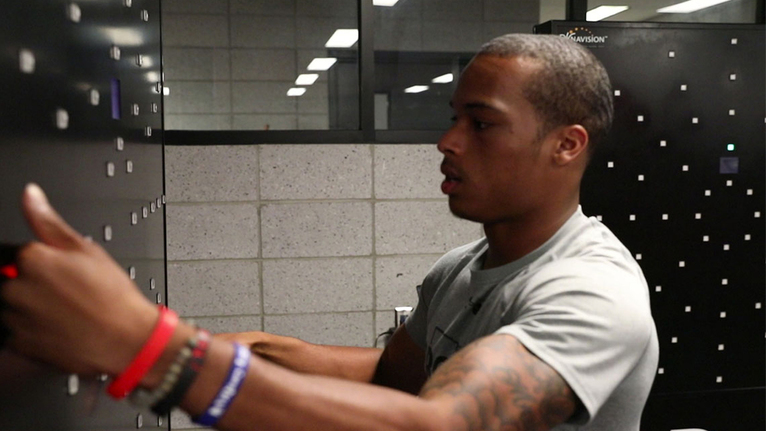 This series of unpredictable flashing lights is more than just a game, however. It’s a crucial part of players’ performances—and perhaps most critically, to the players’ neurologic health.

“This exercise trains them to recognize and trust their vision and their reaction time—especially their peripheral vision,” says Jon Divine, MD, UC Athletics head team physician, UC Health physician and professor of orthopaedics and sports medicine in the UC College of Medicine.

“We know that the hits that hurt the most are the ones that you don’t see coming. And so what we do is try to train them to be able to see, in the periphery, those hits that come from the side—to be able to brace for those.”

And it’s worked, in a revolutionary way.

“Our concussion rate has dropped, when the rest of the country’s rates have gone up.”

As head team physician, Dr. Divine is the primary care doctor for about 500 athletes, a job he calls “really fun.”

”It’s a different medical care delivery model. I’m on call basically every night for the athletes here and the providers here.”

Dr. Divine, or one of the other 14 UC Health providers, staff a clinic in the UC Athletics training room Monday through Friday, and even some Saturdays and Sundays.

In many ways, care for these athletes looks a lot like care you’d find at any family medicine practice.

The clinic is tucked away at the end of a hallway in the training room, located in the Richard E. Lindner Athletic Center on UC’s Clifton campus. It’s past the line of tables where athletes stretch or ice, past the recovery corner, where some sit against the walls wearing lower-body compression suits meant to encourage blood circulation.

The door of the clinic has an eye chart, and inside is an X-ray machine, cotton swabs, a bottle of iodide, gauze.

If an athlete has a cough or a rash, they’re treated in this clinic room. If it’s something more complex, they are referred to UC Health, made possible through the strong partnership with UC.

“At my disposal is every specialty available to take care of just about any problem, two blocks away,” Dr. Divine says of UC Medical Center. 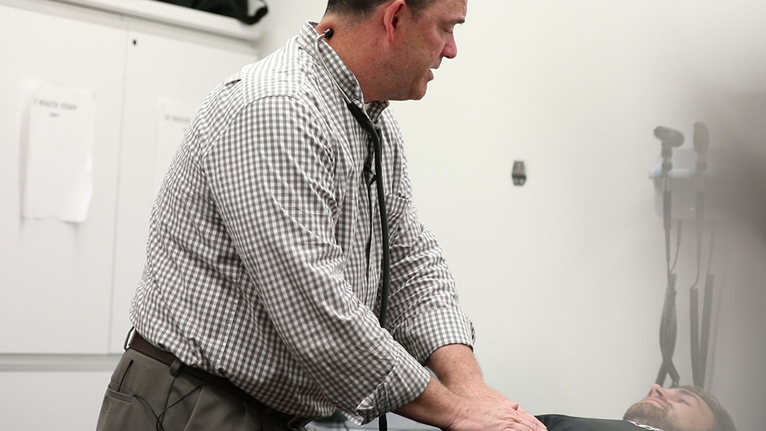 But in many ways, too, care for these athletes is entirely different from the average patient. That’s where sports medicine comes into play.

“The biggest need, I think, is that in most cases, they have to be ready to practice tomorrow,” Dr. Divine says. “It’s year round now. It’s not your dad’s football season where you’re off from January until next year and you play your way to get into shape.”

You can see these differences in Dr. Divine’s pre-participation physical exams, which place a particular focus on the body’s athletic abilities in addition to their general wellness.

In one of these physicals, with a soccer player, Dr. Divine covers the basics—shines a light in both eyes, asks the athlete to stick his tongue out so he can see in his mouth and throat. Listens to his heart, his breathing.

And then, the focus shifts:

“Any back trouble? Neck trouble?” he says, as he begins to bend the soccer player’s knees. “Hamstrings tight. Haven’t stretched yet? ... Knees are good? Ankles are good?

All are. Dr. Divine clears the athlete to play. 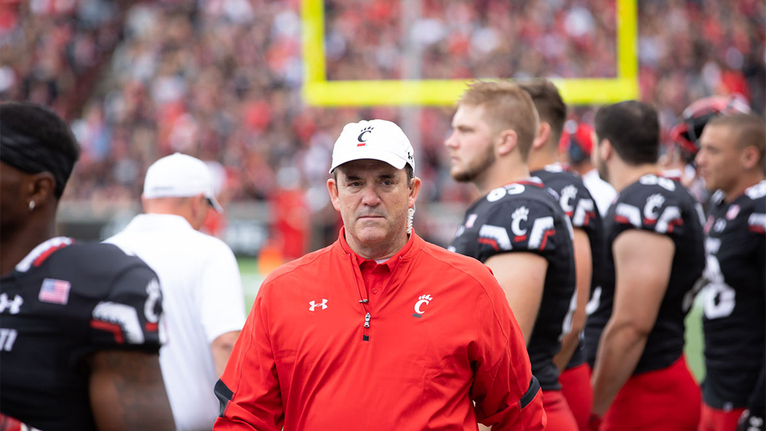 Through the clinic door, back in the training room, is a vision test board. Football players are required to practice at least once a week during the regular season, three times a week in the pre-season.

These athletes, and the data a computer logs with each test, have become the fodder for research studies.

A large focus of this research is dedicated to preventing, diagnosing and treating concussions—research that a partnership with an academic health system enables.

And since UC has introduced vision training—one of the first and few Division I teams to thoroughly implement it—concussion rates have dropped. Dramatically.

Since implementing this training, the football team’s concussion rates have decreased to 2.14 per season—an 80 percent drop since 2010.

That compares to a national average of 11 per season.

And by intervening after a concussion sooner with vision training, UC has improved its return-to-play time and overall rehabilitation success.

While the NCAA averages a return-to-play of 12-19 days after the injury, UC averages about 6.5 days.

“We were one of the first groups around the country that showed that the longer you wait to recover without any activity, the longer those symptoms take to get better,” Dr. Divine says.

These impressive statistics don’t end there. UC Athletics is now seeing the long-lasting impacts of vision training on overall injury prevention and even performance.

The vision training boards allow athletics leaders to program specific drills tailored for each position on the field.

After just one year of vision training with the UC baseball team, the team’s batting average went up 34 points.

“The model we have is what the NCAA wants everybody else to have, and we’ve been doing it a while, so we’re a well-oiled machine,” says Aaron Himmler, UC Athletics trainer. 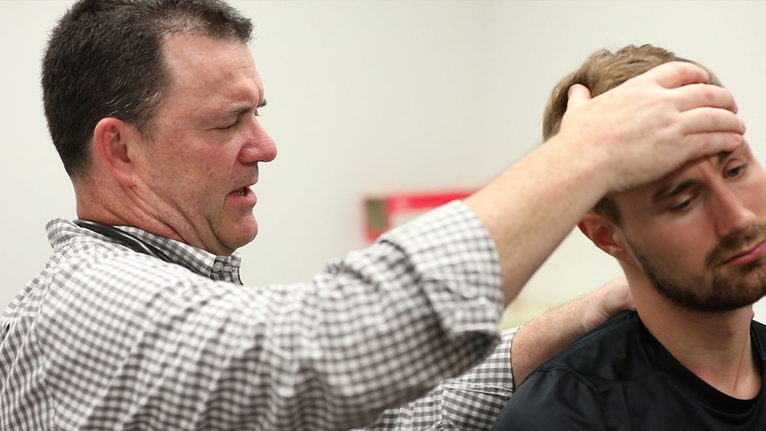 Joe Clark, PhD, neurology professor at the UC College of Medicine who started his career in athletic training, supports much of this on-the-ground vision training research.

He considers himself a “custodian of the brain.”

“Every coach in the world will tell you that you need to train your peripheral vision, but none of them know how to do it,” Dr. Clark says.

Training peripheral vision is key in preventing concussions, especially in an age when frequent smartphone usage is narrowing the field of vision.

“If their brain is still on their phone while they’re on the field, they’re in danger,” he says. “So we’ve got to reverse that.”

Athletes stand close enough to these boards so that they can’t see all of the light-up squares without moving their eyes. In addition to peripheral vision, this training also enhances hand-eye coordination and reaction times.

An offensive lineman, who isn’t supposed to move until the ball snaps, will practice a program that requires him to hold down one button until the next lights up, at which point he must hit that next button as fast as he can.

“Sometimes the brain is the weakest link, so this is training the brain to be faster in not moving and then moving all at once,” Dr. Clark says. 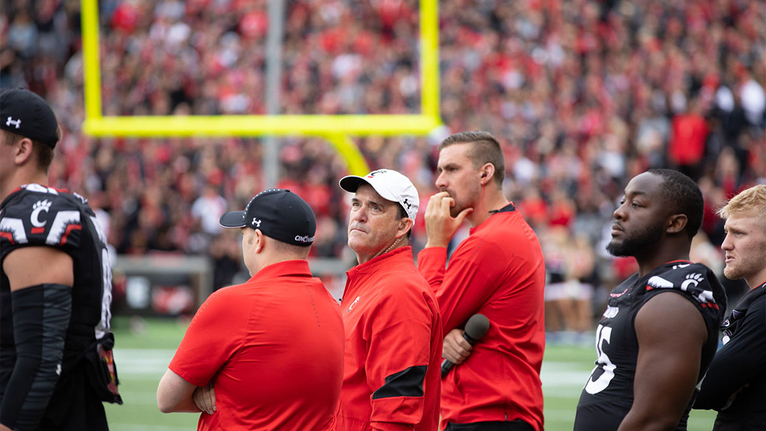 “As you gradually go through college, you can tell your range of vision gets wider,” he says. “On the field as a defensive tackle, you’re looking at the quarterback, but all of a sudden you feel a presence, so now you can react quicker, just to at least brace for it.”

As we learn more about the long-term effects of multiple head blows, preventing and treating concussions is proving to be more important than ever.

At the end of the day, that’s why Dr. Divine and others care—not just for how many touchdowns scored or passes interfered.

It’s about investing in players’ wellness now and for the years to come.

“We are these players’ families in a lot of ways, because a lot of them are far from home,” Ryan Koslen, UC’s associate athletic director for strategic communications, says. “We want to make sure we’re taking care of them.”