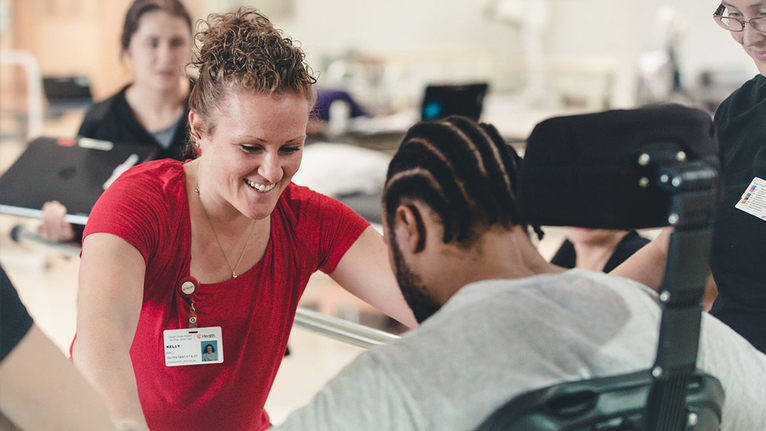 In any given room, Bryan Lawrence is usually the tallest. Rarely would you know.

”Here he comes,” Kelly Ball, UC Health physical therapist says, as she steps away from her laptop to find her next patient for the day.

Down the hallway, wearing a gray shirt and camouflage cargo shorts, Bryan heads toward the outpatient therapy gym at UC Health’s Daniel Drake Center for Post-Acute Care in a wheelchair he’s only known for eight months. 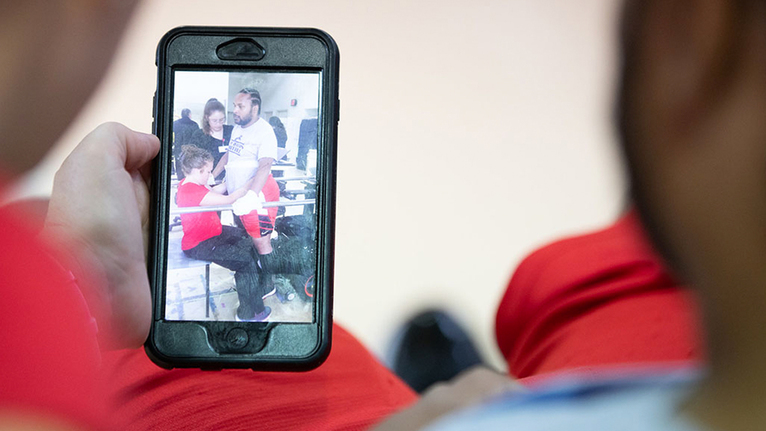 Bryan lifts up from his chair and deftly hovers over to the therapy table, where he drops his weight.

Kelly hops onto the table—a low, padded surface as wide as a king-sized bed but twice as long—at Bryan’s feet and begins pushing his knees toward his chest, pulling them to one side.

It’s a stretching routine that requires no explanation to Bryan, who makes the hour-and-a-half drive from Maysville, Ky. to see Kelly twice a week for 90 minutes—and has been for four months. Instead, they launch right into conversation.

“How long did it take your kids to sleep through the night?” Kelly asks the father of four, as she rolls Bryan’s legs to the opposite side. Kelly tells him about her daughter, how her father-in-law tried to fix her dishwasher. She doesn’t hesitate to inject some humor into their session—as the stretching ends, Kelly leans forward and delivers a one-liner only Bryan hears. For the first time in the afternoon, he cracks a smile and chuckles to himself. 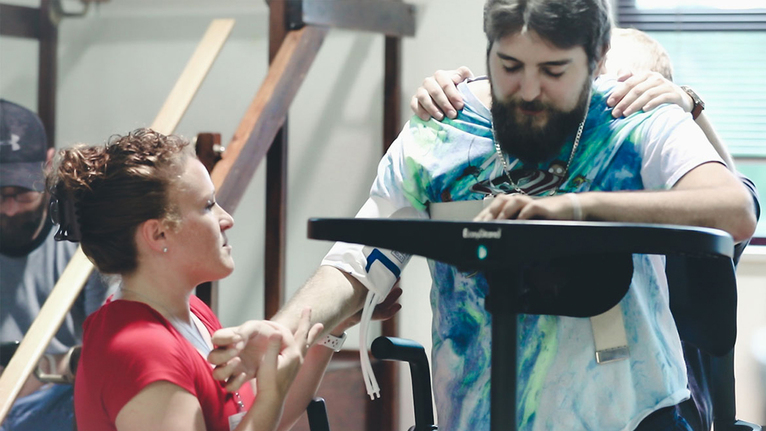 Bryan is able to roll onto his stomach with no help and start doing push-ups—a long way from his 28 days in the surgical intensive care unit at University of Cincinnati Medical Center, when he couldn’t even control both of his arms.

In October 2017, Bryan was driving about a mile or two from his home when he hit a deer and was ejected from his car. The crash caused eight broken ribs, a punctured lung, and several damaged vertebrae.

Despite his tremendous recovery, Bryan is left in a paraplegic state—his legs and lower body are paralyzed.

After stretching, Bryan transfers to a chair at the other side of the gym, where a suit called an exoskeleton drapes across the back and down the front of the chair like clothing laid out, waiting to be worn.

Kelly affixes the suit to Bryan—strapping his legs against a metal rod, placing his feet on braces, pulling his arms through two loops. She adjusts, readjusts and readjusts again. The robotic suit will have to hold his entire body weight.

Kelly programs measurements—stride length, stand time—into the back of the machine.

With a few last beeps, the suit comes to life.

Bryan stands. With the electricity of the robot and the growing strength and balance of the patient, Bryan takes his first step of the day. 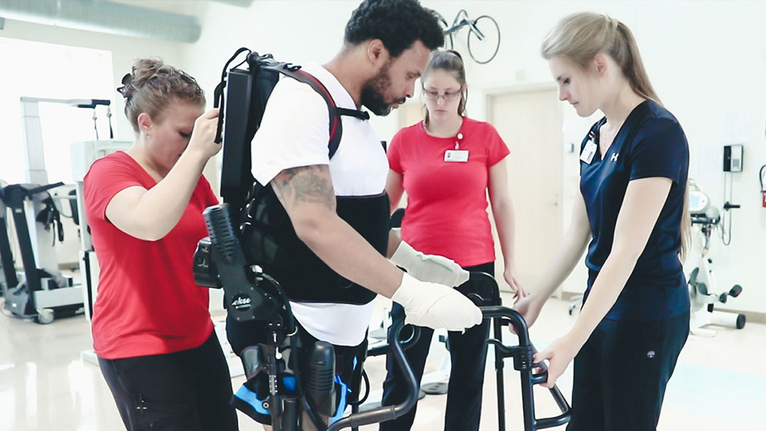 Now, there’s no doubting he’s the tallest person in the room.

Kelly, who holds a doctorate in physical therapy, discovered her passion for neurologic rehabilitation about seven years ago.

“Once you see how much you can make a difference in these peoples’ lives, it’s almost like you can’t go back,” she says.

Kelly mostly works at the outpatient clinic, alongside speech and occupational therapists, who provide patients with the full spectrum of rehabilitation.

But she also works with patients who seek care at UC Health’s disease-specific clinics—spinal cord, amyotrophic lateral sclerosis (ALS) and muscular dystrophy. There, Kelly serves as the head physical therapist, seeing patients immediately after their doctor appointments. Each patient participates in a team meeting with physical, occupational and speech therapists, and physicians to decide the best route for care.

Almost all of Kelly’s patients come through the door carrying the weight of life-altering diagnoses on their shoulders—car accidents, strokes, multiple sclerosis and other degenerative diseases.

“You’re teaching someone something new almost every time,” she says. “Seeing them light up, seeing them able to participate in life-changing events, even after injury when they thought they’d be just bound to a wheelchair.”

Success for each patient looks different. It may not mean returning to the way things were before a diagnosis. But small successes happen every day.

“Some of them aren’t going to run again, but what can we do to make them feel like they have purpose, having meaning again? That’s what I consider success.” 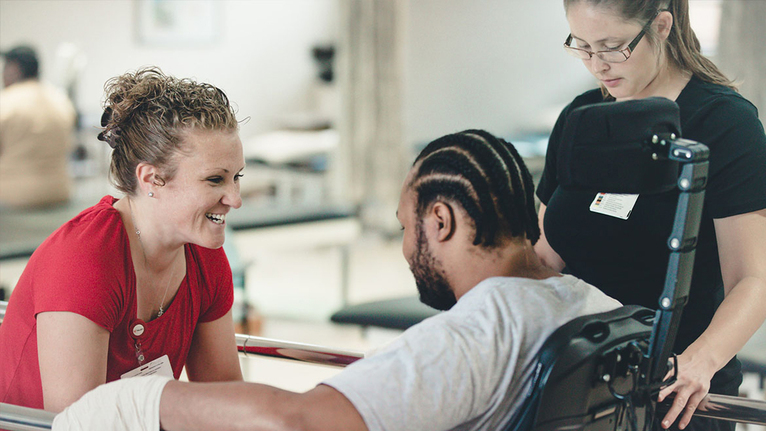 Bryan is just one of Kelly’s handful of patients that Thursday. Almost all of them are recovering from neurologic illness or injury—one suffered a stroke, another survived a gunshot wound.

The physical therapist has a collection of standard exercises in her arsenal, but she isn’t afraid to diverge from them when the situation calls for it.

“I’m always willing to try something, and it doesn’t have to be because I learned it in a book,” she says. “Sometimes I’m like, ‘Let’s just get crazy. Let’s try.’” And sometimes, a patient just trying can end up surprising everyone, including themselves. 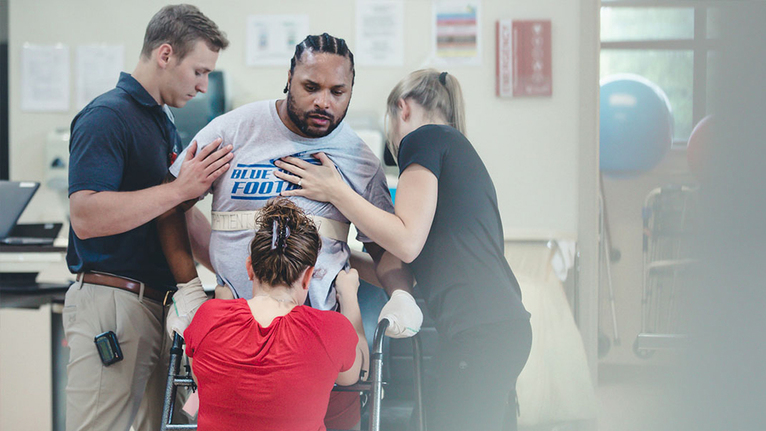 When coaching a stroke patient, Ray, a plumber who just wants to get back to work, Kelly gets creative.

She grabs a ladder from the equipment room, sets it up next to a tall cabinet and lays down different sized weights shaped like pipes. Kelly instructs Ray to grab the smallest pipe, climb three steps up the ladder and place it on top of the cabinet.

Once finished, she says, “Come on, we’re going to go fix something else.” She tells Ray to break down the ladder and carry it across the gym. She points at a wall across the room.

“Now, we need to make sure those pictures are hanging straight.”

It’s her matter-of-fact, friendly tone that makes Kelly’s care for her patients extraordinary—for one afternoon, no one treats them like paraplegics, stroke or gunshot victims. Instead, she just talks to them like old acquaintances, pushing them when they need it and normalizing their days.

Using the exoskeleton is grueling work.

Once standing, Bryan must listen for the beep-chirp of the machine that signals he has properly shifted his weight forward. The sound is how he knows when the next step will begin, so that his leg moves in harmony with the exoskeleton.

It’s not enough to strap a patient in and punch an on-button. This progressive form of physical therapy requires active physical participation and fierce concentration from its user.

With the help of a walker, crutches or a cane, the exoskeleton helps patients with neurologic injuries or conditions stand and walk with an even gait. Kelly can adjust the machine to do as much or as little work for the patient as she decides, depending on a patient’s goals and how much they progress.

Eventually, the suit’s user regains something he or she lost—the ability to initiate steps independently.

It isn’t easy—but the hard work yields a precious reward.

It means another chance. It means hope to patients who, at one time, believed they would never walk again. 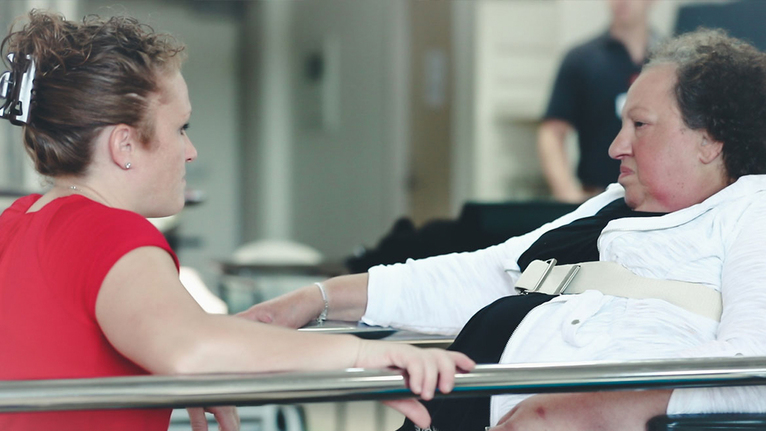 “It feels good,” Bryan says. “[To] get a sense of normality again ... plus I’ve got four kids.” One day, he hopes to walk his daughters down the aisle.

Bryan’s goal is to build enough strength and balance to use his reciprocating gait orthosis, or RGO, with crutches. This device, custom-fit to him, is a hip-and-legs brace that alternatively moves his legs forward when he shifts weight accordingly.

“For me, [the exoskeleton] is making me feel a lot more comfortable walking in my own braces,” he said.

When Kelly advocated use of the exoskeleton, Bryan said he wanted to try it right away.

“[Kelly] has gotten me a lot farther than where I thought I would be,” he said.

Daniel Drake Center was at the forefront in offering this life-changing device to physical therapy patients. The UC Health post-acute care facility treats patients after tragic injury and illness so they can return home, staying with them through physical therapy even after they’ve left.

On this June afternoon, the workout for Bryan and Kelly, who grabs handles in the back of the bionic device as support, is much lighter than it first was. Bryan is relearning how to walk in this new way, needing less and less help from the machine.

“At first, it was completely weird,” he says. He would leave physical therapy exhausted.

Now, he just needs to rest for an hour or so to feel re-energized.

“Crutch right, crutch left,” Kelly says, with hands gripping the machine, her left leg about two feet in front of her right to brace herself just in case—though Kelly remarks she’s only minimally supporting Bryan’s weight these days.

Bryan has walked the length of the physical therapy gym, out into the waiting room hallway and back again with the use of a walker. Now, he’s making the trip again with bilateral crutches that loop around his forearms.

His eyes are fixed to the ground as he steps, concentration in his brow.

Kelly prompts him to look up, use his triceps more.

For the second time, Bryan has walked through the gym and out into the waiting area. He pivots for the return trip.

“I’m not even doing the weight shift. That’s all you, bud,” Kelly says, as they make their way back down the hallway.