Cardiac Patient Says “I Do” after Life-Saving Procedure

Despite COVID-19, couple ties the knot in Cardiovascular ICU at UC Medical Center. 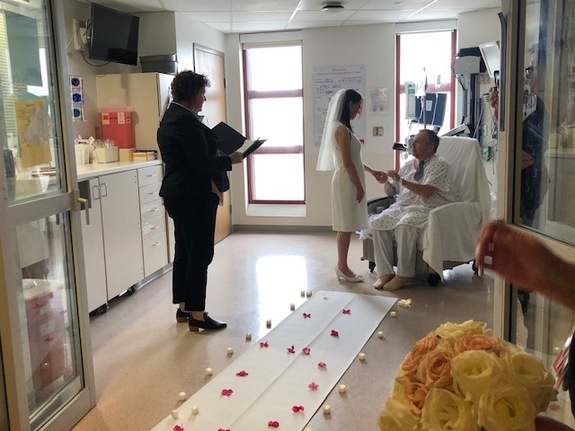 For better or for worse…in sickness and in health.

In many ways, Chris and Jamie Allen already committed to their vows before getting married.

Chris first saw Jamie thirty-two years ago at Preble Shawnee High School in Camden, Ohio. They dated but drifted apart over time. With occasional messages on Facebook, they kept in touch over the years.

In August 2019, they started dating again. Shortly after, Chris, now 48 years old, was diagnosed with heart disease, with significant blockages in his heart. A local community hospital performed a triple bypass surgery to restore blood flow to his heart muscle.

“It was shocking at first to learn that I needed major surgery like that,” said Chris. “But the initial surgery did the trick, and we went back to life as we wanted to live.”

Their wedding was scheduled for Sunday, April 5, 2020, but was canceled due to the COVID-19 pandemic.

“The photographer canceled first,” said Jamie. “Then it was the bakery and lastly the venue. Needless to say, Chris and I were heartbroken, but understood given the circumstances.”

Even with grim news, there was still some fortune to be found: their pastor was looking to find a way to perform the ceremony with just them. As soon as these conversations began, however, Chris suffered a heart attack and went into cardiac arrest.

A local community hospital identified and stented the culprit coronary blood vessels contributing to Chris’ heart failure, then transported him to the University of Cincinnati Medical Center. The clock was ticking for Chris.

“When Chris came to UC Health, he coded twice, which essentially meant he was dying,” said Suzanne Bennett, MD, UC Health critical care anesthesiologist and associate professor of anesthesiology and critical care medicine at the UC College of Medicine. “Because of COVID-19, UC Health is limiting visitors, so I had to explain to Jamie that she would likely never meet the rest of his care team, including the surgeon who would be taking him to the operating room. I eventually had to say to her, ‘You are going to have to trust me. I promise we’ll take care of Chris for you.’ As I told her these words, she sobbed. In normal circumstances, I would have offered her a hug and told her she would see him when the surgery was over. However, I had to maintain 6 feet physical distance, offering her a ‘virtual’ hug, and explained that she would need to leave, assuring her that we would call her.”

Chris was given life support through extracorporeal membrane oxygenation (ECMO), a machine that provides short-term life support for patients with a failing heart, lungs, or both, to support him until his heart recovered.

Antonio Panza, MD, attending physician, cardiac surgeon and associate professor of surgery at the UC College of Medicine, collaborated with Dr. Bennett to place Chris on ECMO. Chris credits the quick thinking and advanced care he received at UC Health as the reasons why he is living today.

“I would not be here today if it were not for the heroic efforts of my care team at UC Health,” said Chris. “As soon as I was on the mend, though, I wanted to marry my dream bride.”

As Chris recovered, his care team learned about the wedding and how it was canceled. To make matters worse, given the severity of Chris’ medical case, he would need to stay at UC Medical Center for an extended time, meaning that his wedding license was going to expire before he could leave the hospital to marry Jamie.

The CVICU team provided flowers, music, and even a makeshift paper tie to simulate Chris and Jamie’s wedding as much as possible. CVICU health unit coordinator, Karen Kissick, personalized the event by baking a beautiful wedding cake. The only thing missing for the big day was the bride. 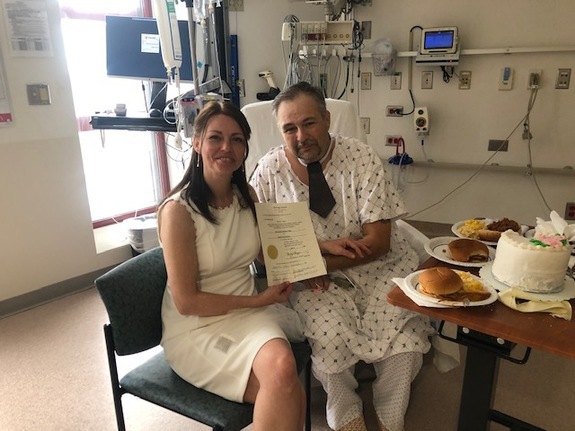 “This is a wedding we’re talking about, so we were able to make an exception to the restricted visitor rule that’s in place with COVID-19,” said Dr. Bennett. “At UC Health, we put patients and families first, so this is something we definitely wanted to do for Chris. It was important that Jamie could be there with him on their wedding day.”

“Given the restricted visitor rule, I was not able to meet Jamie before we placed Chris on ECMO,” said Dr. Panza. “Meeting her on their wedding day was a beautiful thing. She had so much gratitude and it was great to be there.”

Chris and Jamie got married in the CVICU on Sunday, April 5, 2020, just before their wedding license expired. While their friends and family could not attend the wedding, they were surrounded by new family: the care team who saved Chris’ life.

“We love to give patients as much hope as we can at UC Health,” said Rev. Arnold, who married Chris and Jamie. “It is a privilege to be part of a great team of employees who celebrate life and love in the midst of this pandemic. Chris is an overcomer, and we wish him and Jamie all the health and strength in the world.”