Seventy-six-year-old Gary Campbell reunited with his UC Health West Chester Hospital care team to offer a message of hope: Don't give up, don't ever give up! 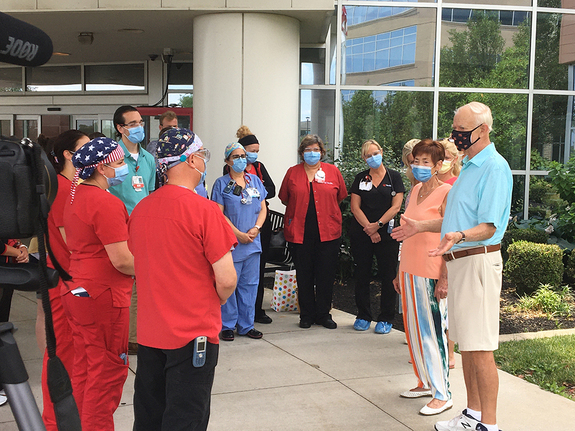 Gary Campbell, 76, of West Chester Township, does not know exactly where he contracted COVID-19. What he does know is that he and his wife of 57 years, Linda, had taken a vacation trip to Costa Rica in Feb. 2020 with their family to explore the mountains and tropical rainforests. He believes that he likely contracted the virus while traveling through a crowded airport during their return trip home to the states.

After testing positive for the virus in the West Chester Hospital Emergency Department in mid-March, Gary was admitted as an inpatient in the hospital’s Intensive Care Unit. His condition declined quickly, and he was intubated and placed on mechanical ventilation to keep him breathing and alive. His prognosis was grim; doctors told the family that they did not expect him to survive the disease.

According to Daniel Tanase, MD, UC Health pulmonology and critical care specialist and assistant professor in the Department of Internal Medicine at the University of Cincinnati College of Medicine, at one point, Gary was near death. “He had different infections going on that we had to manage. He had also become septic and required dialysis treatment. He basically had a 1% chance of survival,” stated Dr. Tanase.

With the progression of the disease, it appeared that it was time for Gary’s family to say their final goodbyes – and they had to do it through FaceTime, due to COVID-19 hospital visitation restrictions. It was nearly unbearable.

With the tremendous care and life-saving efforts put forth by the critical care physicians, clinical and support staff at West Chester Hospital, and with the love and support of his family, Gary fought back and miraculously recovered. He was discharged from West Chester Hospital on April 29, 2020, after 45 days of battling COVID-19, including more than 20 days on a ventilator.

Since that day, Gary’s recovery has been continual and steady. He’s had follow-up doctor’s visits and rehabilitative therapy sessions to help him gain strength and mobility. Each day brings new improvements, and he’s happy that he’s slowly starting to play his favorite sport again – golf. He is also proud to share that he recently placed 100 bags of mulch in his yard.

His health has been restored and he’s doing very well, and he gives credit to the love of his family and the quality, compassionate care that he received from UC Health.

Gary recently reached out to West Chester Hospital to request a special reunion with the healthcare professionals who took care of him. Not only did he want to personally thank them for helping to save his life, but he also wanted them to “get to know the real Gary Campbell,” he said.

“I can’t thank you all enough,” he told the group. “I’m here because of you. Today, it’s about all of you,” he said, with tears in his eyes and a smile behind his mask.

While Gary recalled some staff members who took care of him during his lengthy hospital stay, he was not able to remember every caregiver due to being in a coma a portion of his stay. His care team, however, has very clear memories of him and the care and treatment they provided him. At the reunion, they were eager to see and talk with him.

Each staff member took turns stating their name and job role, and how/when they provided medical care to him. Some nurses and therapists helped place the intubation for application of the ventilator, some provided day-to-day care during the time he was in the ICU, some recalled helping to remove the vent and intubation, and others provided care to him once his condition improved and he was moved to a regular medical unit.

The team collectively and individually thanked him for taking the time to come to the hospital to meet with them, as it was so meaningful for them to see how well he is doing. The hospital chaplain offered a meaningful prayer for Gary and his family.

“UC Health and West Chester Hospital have an amazing staff who took great care of my dad and have been so kind,” said Gary’s daughter, Tammy. “Since we were not able to visit my dad in the hospital and meet the staff, we just wanted to come back and look them in the eye and say thank you for saving our father.”

Gary has a personal motto that he believes in strongly and shares with other people who may be battling COVID-19 as well as other illnesses and diseases.

“Don’t give up. Don’t ever give up!” he says emphatically. “This motto has truly helped me in my life, and I hope it can help others as well.”