It all began with a small, gray patch of skin on his left hand. 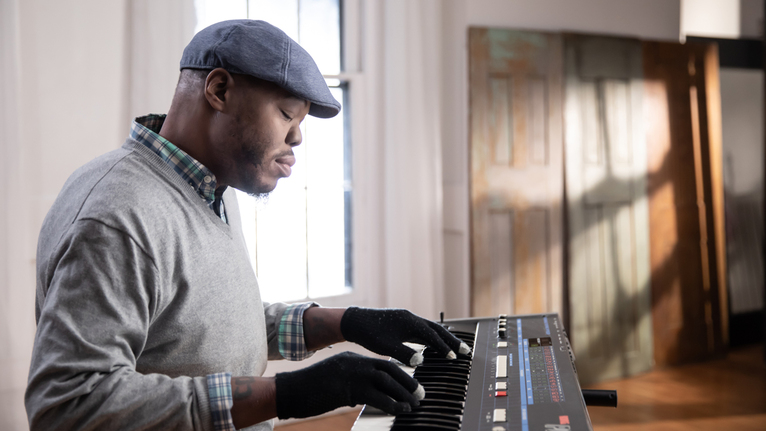 For Cleveland Dodds Jr., a teacher and musician who makes his living with his hands, the development was alarming.

“It was like a rash in the middle of my hand, and I noticed that my skin would not maintain moisture,” he said.

And on top of that, he was so itchy that he often couldn’t sleep.

Cleveland called his doctor, but he wasn’t able to get an appointment quickly enough. When he visited a local emergency room, he returned home with a diagnosis of psoriasis and a prescription for a pill.

His mother urged him to see a specialist at UC Health, Greater Cincinnati’s academic healthcare system.

“Honestly, to this day, it was the best move I made,” said Cleveland, an elementary school teacher and father of two.

He saw several specialists, and underwent multiple biopsies. One finally provided an answer: Cleveland was suffering from Mycosis fungoides, a rare form of lymphoma of the skin.

“I didn’t want to believe it. I wanted to believe that they were wrong – I didn’t have cancer,” he said.

He had been diagnosed early, at stage IB. His prognosis was good.

But then, his condition began to progress rapidly.

“Some days I would wake up and it would look like my body was completely covered in ash,” he said.

During one winter break from teaching, he was able to practice the piano for hours each day.

By the end of the two-week break, however, his hands had deteriorated to the point where he could no longer play without intense pain.

“Not playing the piano is huge. But this condition is bigger. So I was humbled. And actually started reinventing myself,” he said.

Because the cancer is so rare, treatment options are limited. Cleveland went through a period of depression and denial – until he realized that this was not how his story is meant to end.

He continues to play the piano despite the pain it causes him – choosing to play through the suffering rather than give up what he loves. He’s also taken up singing.

He and his care team are pursuing treatment options. And Cleveland is learning to live each day with joy, faith – and hope.

“It’s not about what you tell me as much as it’s about what I believe,” said. “You can tell me I’m going to die, and I’m not going to believe you. I have to think on things that make me happy – and it’s called joy. It’s called hope.”