“When I walked in that door, I knew those physicians were dedicated to their profession and had hope for me.” 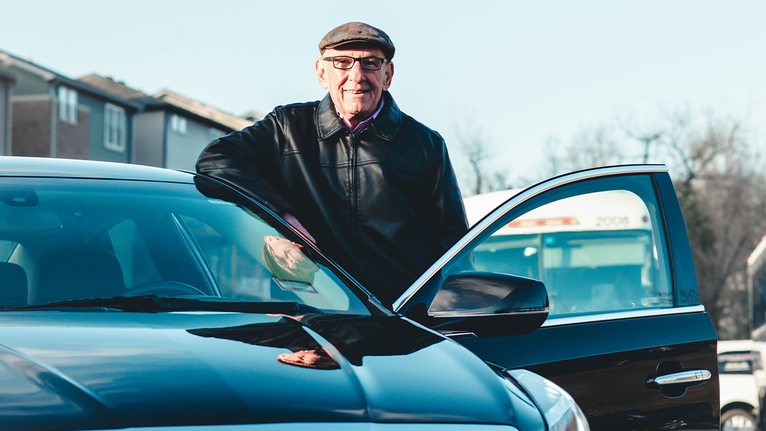 That is what 65-year-old Don Maushart said about his first visit to the University of Cincinnati Cancer Center in June 2021 to find out his treatment options for his esophageal cancer.

Don works for a transportation company in Newport, Kentucky. During his free time, he enjoys spending time outside, working in the garden and fishing. In his eyes, any temperature below 70 degrees is cold. When he’s not outside, he’s spending time with his wife of 42 years, Nancy, their three adult children, daughter-in-law and their grandkids.

“Our family is super close. Our grandkids are the light of our lives,” said Don.

One day, Don started having trouble swallowing his vitamins. He immediately scheduled an appointment to see his family physician. As he waited for his appointment, his condition worsened‑ he was struggling to even swallow food.

After seeing his doctor and an ear, nose and throat specialist, he went to a local hospital to have additional testing done, including a biopsy. The tests revealed a tumor in his upper esophagus. The esophagus is the long, hollow tube that runs from the throat down to the stomach.

With his recent struggles swallowing, Don and Nancy both knew that the diagnosis wouldn’t be good. His doctor recommended he go to the UC Cancer Center and see Davendra Sohal, MD, UC Health hematology oncologist and associate professor in the Department of Internal Medicine at the UC College of Medicine.

Don’s doctor recommended the UC Cancer Center because of the research and clinical trial options not available anywhere else in the region. Additionally, the UC Cancer Center offers multidisciplinary teams to care for the most complex cancer cases. With the partnership with the University of Cincinnati, UC Health offers clinical trials that may offer patients another option for treatment. 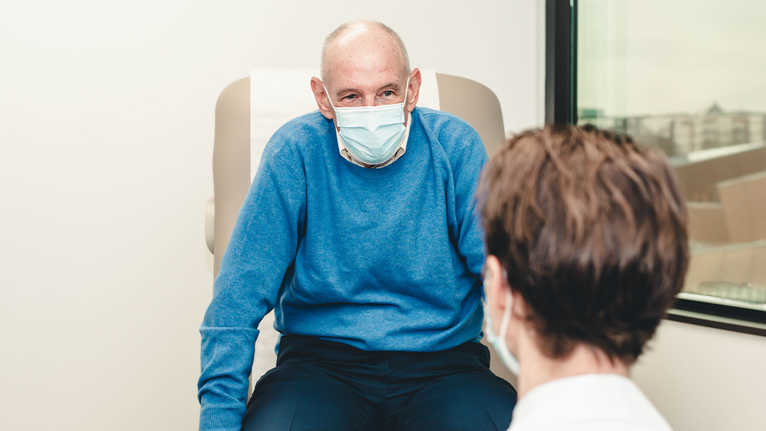 “He came to us [at the UC Cancer Center] because it was a very large tumor that we weren’t sure if we were going to be able to remove with surgery,” explained Robert M. Van Haren, MD, UC Health thoracic surgeon and assistant professor in the Department of Surgery at the UC College of Medicine.

A few years earlier, Don’s transportation company was asked to pick someone up from Cincinnati-Northern Kentucky International Airport in Hebron, Kentucky, and take him to up to the Clifton Campus. It was a physician who was coming to Cincinnati for a potential job opportunity at UC Health. The physician? Dr. Van Haren.

Don typically doesn’t go on “runs” to pick up clients. He works in the office and manages the Airport Shuttle Division. But on this occasion, he needed to do the run himself. He picked up Dr. Van Haren, and as they made their way through Northern Kentucky and into Cincinnati, they discussed their jobs and the best places to live in the city. As they pulled up to UC Medical Center, Don told Dr. Van Haren that he hoped to see him again sometime.

He got his wish, but not exactly in the way he  originally thought.

In seemingly the most unlikely circumstances, Don was in a room on the ninth floor of UC Medical Center, with Dr. Van Haren and some of his resident physicians, reviewing his diagnosis. Despite the concerns over his condition, he was relieved to see Dr. Van Haren.

“It made me feel better to see a familiar face,” Don said. “They really cared about me from the first initial meeting. This is the place I wanted to be. They really took care of me.”

Nancy was also pleased with his care team and felt confident they would do everything they could to save Don’s life. She said, “The collaboration was great. Everything went seamlessly. They were very patient and explained everything thoroughly. They made us feel so welcome and showed that they really care. I knew we had their love.”

Immunotherapy is a type of treatment that suppresses the immune system and helps treat diseases such as cancer.

“This was a new kind of drug that works on the immune system in a new way,” Dr. Sohal explained. “We are one of the few sites in the country that participated in this trial, and we added it to Mr. Maushart’s treatment.”

Without hesitation, Don opted to participate in the clinical trial. He trusted his team and thought it would give him his best chance at beating his cancer. “If it didn’t help me, it certainly would help someone else.” After going through additional testing, he was accepted into the study and began his treatment.

The combination of immunotherapy along with chemotherapy and radiation was successful, allowing Don to go through surgery to have the remainder of his tumor removed.

“At the time of surgery, we removed it and found that he had an excellent response, and almost all of the tumor had disappeared or had been killed by the treatment,” said Dr. Van Haren. “So, we were really happy with that outcome. It gives him the best chance and overall outcome for survival long term.”

Don has had a lot of support throughout his cancer journey. Nancy came with him to every infusion appointment and his kids came to town. They assisted around the house and gave him little gifts, like a blanket and a hat to keep him warm during  chemotherapy. Many others offered to drive him to his appointments if Nancy was unable to go.

“I knew they would pick us up and carry us,” Nancy said when referring to the support they received from family and friends. “Family was a huge motivation and helped carry us through the toughest days.”

Early on during his treatment, Don’s family created a “Why I Fight” calendar to remind him of his reasons to keep going. Each day he had therapy, his family put a picture of his family members, past travels or his favorite hobbies. This gave him all the motivation to fight hard, even on the hardest days.

Don and Nancy also relied on their faith in God to help them overcome these difficult obstacles. 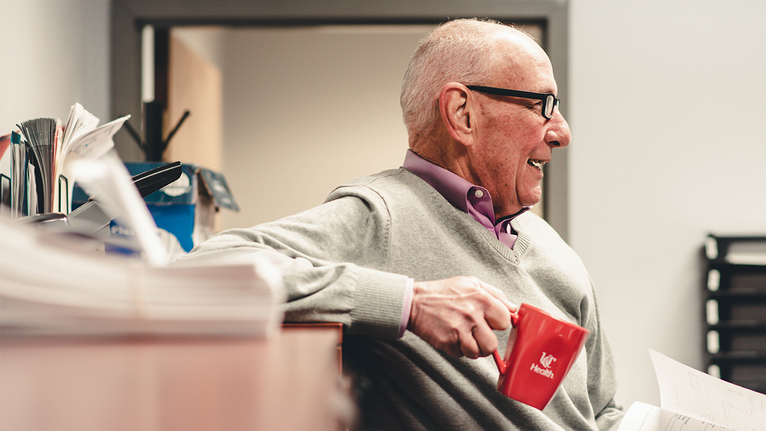 Don feels great and has a new perspective on life. He wants to give back in any way he can. “Life is really good,” he said when he was first interviewed. “I’m lucky to be here talking to you.”

Thanks to his care team, Don has been able to return to his job, spend time with family and get back to his favorite outdoor activities. He plans on volunteering now that he is cancer-free.

When asked how he would describe Dr. Van Haren and the rest of his UC Health care team, he was speechless, but he does recommend UC Health to anyone he comes across. He already recommended the UC Cancer Center for a family member to receive treatment.

“I have the utmost respect for the facilities and the personnel. I could feel the love from the doctors,” Don said. “The way they treated me and my family. I can’t say enough about them. I’d do anything for that guy (Dr. Van Haren). They are best in class. Don’t even think about going anywhere else.”

Nancy knows the future is bright and has the assurance that Don will always get the best treatment thanks to the science, research and collaboration at UC Health and the UC Cancer Center. It has been an emotional journey, but Don and Nancy have hope for many happy, exciting days ahead.