Jordan Thompson is a powerhouse in volleyball. The University of Cincinnati graduate advanced USA Women’s Volleyball to its first-ever gold medal victory at the 2021 Tokyo Olympics.

Her 34-point game against China in the preliminary rounds made her a breakout star at the games. Four short days later, Jordan made international headlines because of an injury. She was sidelined after rolling her ankle while playing against the Russian Olympic Committee (ROC).

Team USA suffered a stinging defeat to the ROC that day, but Thompson and her teammates had already secured a spot in the quarterfinals, eventually leading to the ultimate prize of Olympic gold.

At 24, Jordan is looking ahead to a return to the Olympic stage in 2024 and beyond. It’s a remarkable journey for the UC Bearcat’s former No. 23, especially considering an elbow injury that could have ended her career while she was still in college. 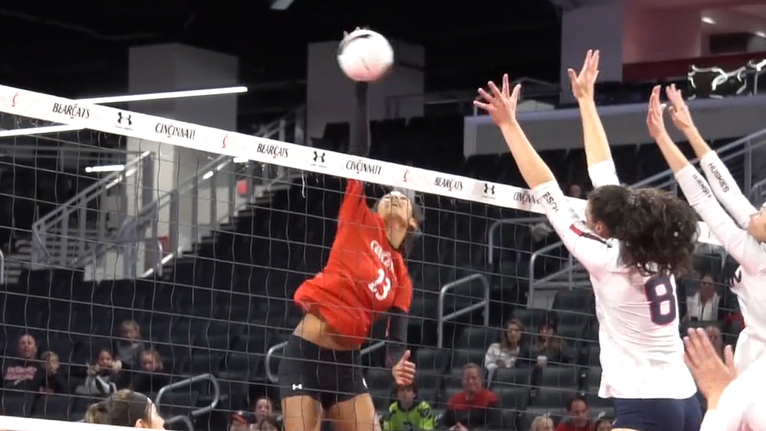 The “Pop” That Changed Her Life

“We were just going through different drills, just normal practice stuff,” Jordan said. “I remember the play where it was a middle attacking on the other side, and my setter crossed in front of me.”

In a split-second, she hyperextended her elbow when she reached for the ball and collided with her teammate. “I remember feeling a little ‘pop.’” She explained. “It hurt really badly, but I got up to shake it off and continued with practice.”

Jordan remembered trying to hit the ball and her elbow “was really clunky” and didn’t feel like it was moving as smoothly as it did before.

“I told my trainer what happened and took time off anything overhead, like hitting, blocking, and serving. After a while it wasn’t getting any better, so I got an MRI just to rule out anything serious.”

She quickly learned how serious her diagnosis was.

“The type of injury she had was what’s called a tear of the ulnar collateral ligament (UCL). That’s the major stabilizing ligament of the elbow,” Dr. Colosimo said. “The only cure is to reconstruct the elbow. It’s a huge impact on an athlete’s career.”

Jordan’s diagnosis was immediately felt by her teammates back at UC.

“The impact immediately was certainly shock,” said Molly Alvey, UC Head Volleyball Coach. “When you hear the words come out of the doctor’s mouth and to be in that situation, there’s no words to describe it.” Coach Alvey first recruited Jordan out of high school.

“Getting the news of what actually happened and what was going on in my elbow was devastating at the time,” Jordan said. “You see other athletes in the training room going through surgery and recovery, but you never think you will be in that position.”

“Knowing I was going to be taken out of the equation and watching everything from the sidelines for a year, mentally, was really tough.” 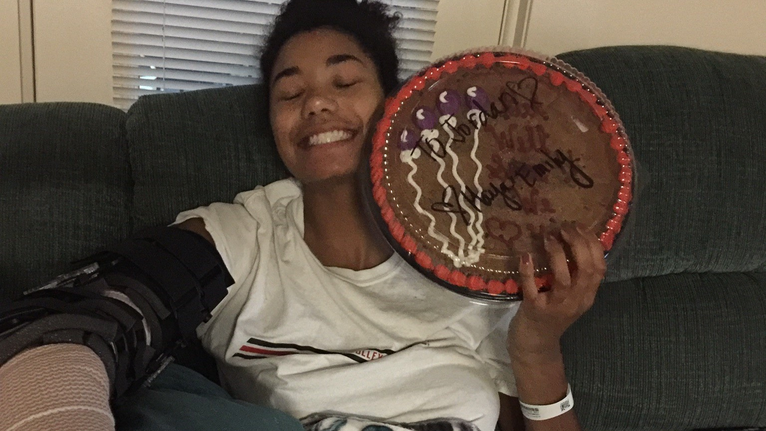 “I got Tommy John surgery, which as far as I know, is usually done in baseball players,” Jordan said. “The rehab was about 10 or 11 months until I got back to the court.”

UCL injuries are typically caused by repetitive use of the elbow joint. They are especially common in athletes who perform overarm movements, like baseball pitchers, javelin throwers and volleyball players going for the kill shot.

Tommy John surgery is named after former Major League Baseball player Tommy John. The Los Angeles Dodgers pitcher was on the mound against the Montreal Expos in July 1974, when a twinge in his arm forever changed how torn UCLs are treated.

John described his UCL injury as “the strangest sensation I had ever known ... as if my body continued to go forward and my left arm had just flown out to right field, independent of the rest of me.”

Frank Jobe, MD, the team surgeon for the Dodgers, set out to perform a UCL repair in John’s elbow. According to MLB.com, Jobe was surprised to discover during surgery that John’s UCL was completely worn away from overuse.

Dr. Jobe’s pioneering approach to fix the problem gained fame as “Tommy John Surgery.” He restored the elbow’s movement by replacing the UCL with a ligament from John’s wrist.

“Essentially what you’re doing is recreating the elbow anatomically,” Dr. Colosimo said. “We use part of a tissue in the arm called the palmaris and weave it back into the appropriate position. The operation is relatively difficult, and then what’s really key is the postoperative care and rehabilitation.” 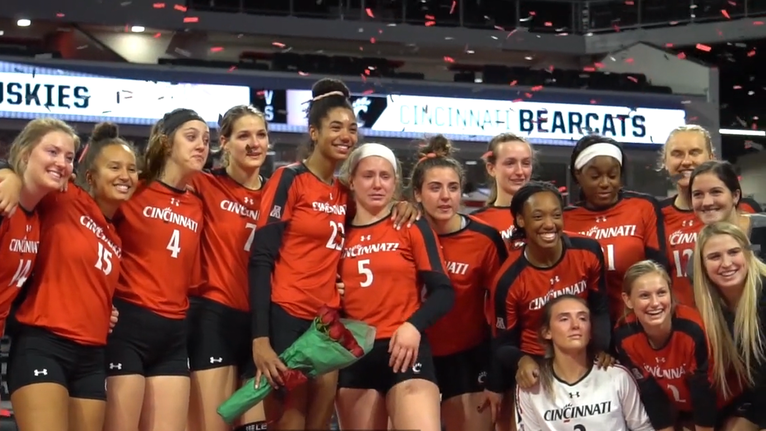 The same surgery that got Tommy John back on the mound would also restore Jordan’s elbow and continue her journey toward Olympic glory.

“Going into surgery, I knew I had the best trainers and physicians taking care of me,” Jordan said. “Dr. Colosimo is very honest and upfront about the process and what it’s going to feel like. I really appreciated that and knew I was in good hands.”

With a successful surgery completed, Jordan was ready to recover and focus on getting back on the court.

“When you come back from an injury and you’re really uncertain about things, having those people who genuinely care and know what they’re doing, it really eases your mind as an athlete,” Jordan said.

“The relationship we have with UC Health is critical,” Coach Alvey said. “The presence of UC Health around our building on a daily basis is critical for us to keep our athletes healthy.”

Coach Alvey and Jordan worked closely with Dr. Colosimo and the UC Health team to bring her back stronger than she was before, which at times meant setting the right pace for rehab.

“Jordan is one of those really, really special athletes who just stands out, never really complains and fights through,” Dr. Colosimo said. “She’s extremely aggressive and really tried to push it and push it, and we almost had to hold her back to get her where she wanted to be.”

“The worst part was trying to gain my range of motion and strength back slowly, then reintroducing volleyball to all of that,” Jordan said. “I really think of it as a blessing now to have that time to slow down and think, ‘You know, I have a few more years left of my college career. What do I want to make of that?’”

The extra year at UC would give Jordan an opportunity to fine-tune her skills as she hoped to move to the professional level.

“We slowly progressed her back in and took an international trip where you’re playing against older, more experienced teams,” Coach Alvey said. “That’s the first look that we got at her, and we knew she’d be just fine.”

What Jordan ended up building for herself after her surgery and recovery was one of the most storied careers in the history of collegiate and Olympic volleyball.

In 2019, she would be unanimously named American Athletic Conference Player of the Year. Then she would get the ultimate call: to represent the U.S. at the Olympics.

“So, many things have to align to have that opportunity,” Coach Alvey said. “To be the first-ever gold medalist in a sport you are incredibly strong in, it’s something no one can ever take away from you, no matter what happens for the rest of your career.”

“Getting to the Olympics by itself is such an amazing accomplishment, but the coolest part was walking around the Olympic Village and seeing all these athletes that have been through similar things,” Thomson said. “There’s so much struggle, time, effort, energy and goal setting that goes into it. You feel this really intense bond to these people who you might not even talk to.”

One person she did talk with while she in Tokyo was Dr. Colosimo, who continued to cheer her on stateside.

“One of the most rewarding things I’ve done for 30 years is to turn on the TV and to see one of my athletes on the field, whether it’s the NFL or Major League Baseball, or Jordan Thompson who’s winning the gold medal in volleyball,” Dr. Colosimo said. “Jordan was delightful. It’s been an honor getting to know her and absolutely a thrill to watch her win the gold medal.”

“I would say for anybody considering getting care at UC Health, you’re in good hands,” Jordan said. “That’s the most reassuring thing.” 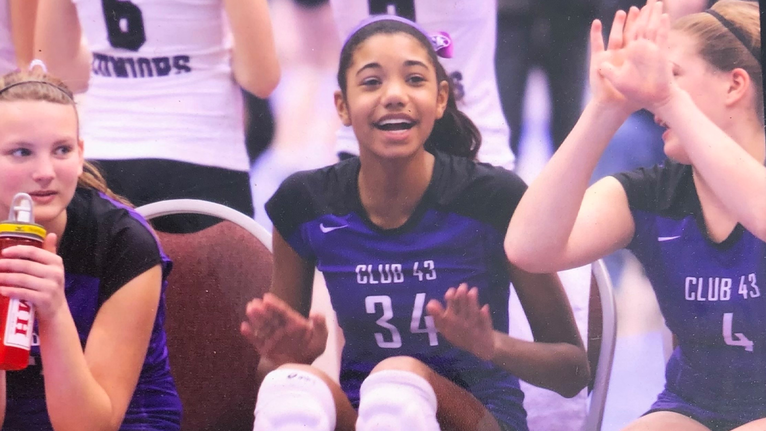