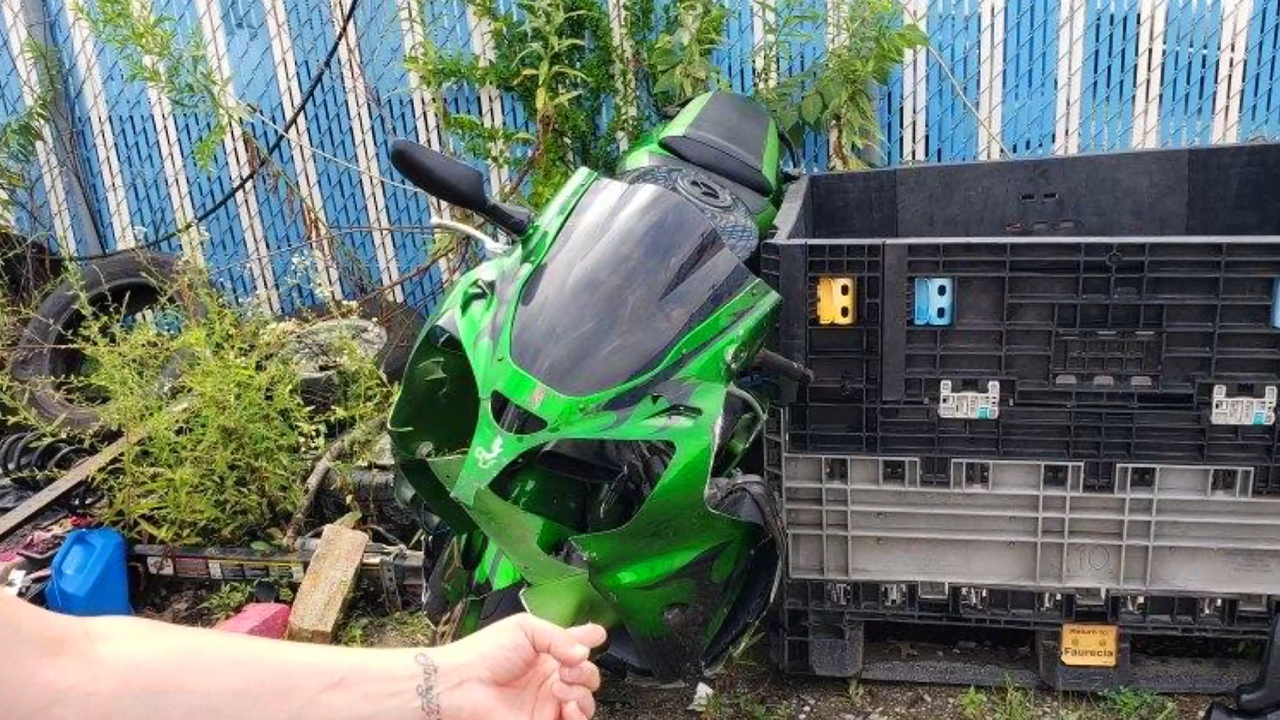 Dennis Crowder III can’t help but feel emotional when he looks at photos from July 21, 2020. He sees his totaled 2002 Kawasaki Ninja. He also sees the banged-up moving truck he had hit going 60 miles per hour. “Sometimes, it feels like a dream,” Dennis explained.

Dennis, a resident of Covington, Kentucky since 2001, has been driving motorcycles since he was 16 years old. “I don’t remember driving to work,” he says. “I don’t remember anything except waking up in the hospital.” He drove his motorcycle to work that day because his car was in the shop.

It was an ordinary day that was anything but as he took a corner in a hurry and hit the side of the moving truck. Emergency medical services (EMS) transported him to the region’s only level I adult trauma center — which means the right mix of specialists and medical resources are available at a moment’s notice — at UC Medical Center.

His parents got the call that no parent wants to receive. “They were told that I had been in a motorcycle accident and was in the intensive care unit. The staff told them they weren’t sure if I would live or die.” His parents immediately started the hour drive to the hospital.

When Dennis arrived in the Emergency Department, UC Health’s trauma team assembled so they could treat him as quickly as possible. The trauma team consists of a multidisciplinary group of experts from around the hospital who respond at once when trauma patients arrive.

“We heard we had a very severely injured patient who had sustained a motorcycle accident. When that happens, we activate a system that results in the immediate availability of a surgical team, an operating room and a group of emergency medicine doctors, nurses and medics — probably 100 people took care of him in those first two to three hours of his stabilization,” said Amy Makley, MD, associate professor in the Department of Surgery at the UC College of Medicine and a UC Health trauma surgeon.

Dr. Makley led the trauma team as they worked tirelessly to save Dennis’ life. Even with UC Health’s advanced resources and large, diverse clinical team, the outlook didn’t look good. In total, Dennis broke 14 ribs — 12 on his left side and two on his right. He also broke his elbow, fractured his hip and fractured a bone in his lower left leg. On top of that, his left lung was severely damaged, and his heart was in critical condition.

Things looked so bleak that Dennis’ family came to visit in preparation for his possible death.

Running out of time and options, the trauma team placed Dennis on extracorporeal membrane oxygenation (ECMO), a device that gives the heart and lungs support when they cannot function on their own. ECMO gave his heart and lung critical time to recover. Dennis then underwent a major surgery remove his entire left lung because of the extent of the damage. At this point, his odds of survival were probably less than 1%.

“Particularly when you don’t have both lungs anymore, we’re able to put patients on a circuit that, outside of the body, oxygenates the blood and then pumps it back in,” Dr. Makley explained.

Dennis fought for his life, and the trauma team worked nonstop to give him hope and save his life.

“For us as trauma surgeons, we push the limits of the technology that we have, because we know it’s (the survival rate) is never 0%,” said Vanessa Nomellini, MD, PhD, associate professor in the Department of Surgery at the UC College of Medicine and a UC Health trauma and critical care surgeon.

The operations were successful, but Dennis had a long way to go. He was stable and still alive.

“I couldn’t talk when I woke up [in the hospital]; I had to write letters in people’s hands and then eventually used a white board to write on,” Dennis said.

Things slowly got better as the days went on. He needed a miracle to survive. And that’s exactly what he got. He made progress one step at a time.

After about a month, Dennis left UC Medical Center and began rehabilitation at a long-term care facility in Kentucky. He had a long road ahead, but there was hope.

“Everybody in the hospital was rooting for Dennis,” Dr. Makley said. “I can guarantee that somebody who helped take care of him might even become a trauma surgeon in the future because of the impact that taking care of him had on them.”

Today, Dennis continues his recovery in the UC Health Post-ICU Clinic. This clinic, which is part of the national Critical and Acute Illness Recovery Organization (CAIRO), helps improve patients’ quality of life following traumatic injuries. UC Health is the first and only health system in Greater Cincinnati that is part of the CAIRO network.

“If I was taken to a different hospital, it may have been a different result. But going to UC Health, they did a really good job.” Dennis Crowder

Dennis had a lot to fight for, including his family and five-year old daughter. The entire experience was traumatic for everyone in the Crowder family.

“There was a lot of push to survive and recover for my daughter,” Dennis explained. “Before the accident, I would be the one to take her to day care, pick her up from day care. And then all of a sudden, I just wasn’t there.”

It wasn’t until Dennis got out of rehabilitation when he saw his daughter, around September 2020. It was emotional for both him and his daughter. She didn’t understand why he was gone from her life for so long. Dennis had all of the reason to live, so he could come back and raise his daughter.

“I always end the session with asking patients, ‘If there’s one thing that you could get back to doing before your crash, what would it be?’ The first thing he said was, ‘I want to be a dad again. I want to be the dad I was before the before the accident,’” Dr. Nomellini said. “And that’s what we’ve been trying to get him to do.”

Dennis continues to recover. He has had multiple surgeries and more months of rehabilitation. He walks with a slight limp and still participates in therapy to help him improve his ambulation. He has some nerve damage that keeps him from straightening out his fingers on his left hand. This is all a small price compared to his odds of survival when he first came through the doors of the UC Medical Center Emergency Department.

Despite such poor survival odds, the trauma team never lost hope that they would make a difference for Dennis.

“When you have physicians, pharmacists, critical care and ED nurses, dieticians, physical and occupational therapists and respiratory therapists working together to take care of the patient, one thing is clear, and it’s that the patient’s outcomes are better,” said Chris Droege, PharmD, critical care clinical pharmacy specialist at UC Medical Center and adjunct associate professor of clinical pharmacy at the UC James L. Winkle College of Pharmacy.

Dennis wasn’t the first person in his family to receive treatment at UC Health. About 11 years earlier, his grandmother was transported via Air Care to UC Medical Center after also suffering traumatic injuries from a motorcycle crash. He never expected to end up at the same hospital.

“I had no idea what levels of healthcare were around here because I had no reason to look into it,” Dennis said.

Dennis feels lucky that he was taken to UC Medical Center. He may not have survived if he went anywhere else.

“I absolutely recommend UC Health. From what I remember, all of the doctors and nurses took great care of me and took the time to listen,” Dennis said. “They took the time when I wasn’t able to talk for myself to talk to my parents before procedures. They came to me when I came to, they explained procedures before we actually went into them.”

Dennis looks forward to reuniting with the rest of his multidisciplinary care team back at UC Health. He can’t wait to see them and show them how well he is doing, thanks to their compassionate care.

“I want to see some of the nurses and thank them in person and let them see the aftermath of where I was to where I am today,” Dennis said. “The fact that I’m up and walking, breathing, talking — when I left CVICU, they didn’t know if I’d survive. It’d be good to see the aftermath of their care. I’d love to let them see it and thank them in person.”

Despite the accident, Dennis has every intention to drive a motorcycle again. He has a bike ready to go — now he is focused on improving his foot and hand so he can take off and go.

It’s been a difficult journey for Dennis over the past year. But as the days pass, he gets stronger and stronger. He’s a true fighter who inspires hope in other trauma patients.