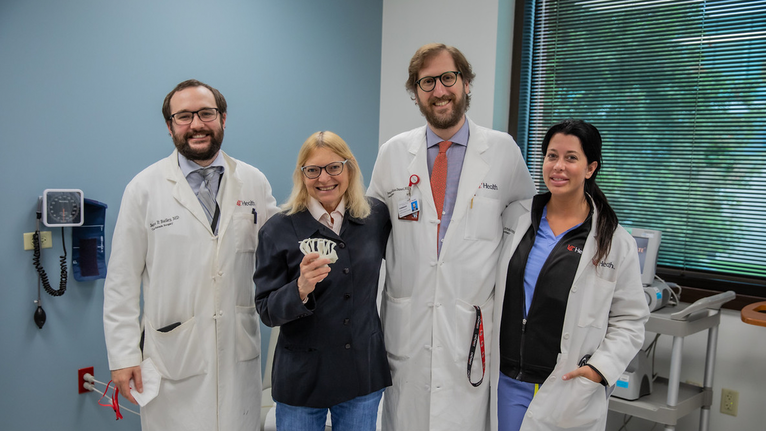 Under the leadership of Tommaso Hinna Danesi, MD, UC Health cardiac surgeon and associate professor in the Department of Surgery at the University of Cincinnati College of Medicine, experts at UC Health performed the nation’s first-ever endoscopic triple valve surgery on a 63-year-old heart failure patient. With a single, one-inch incision, the surgical team utilized an endoscopic approach to replace aortic and mitral valves, and repair the tricuspid valve. This approach is best suited for fragile patients suffering valvular disease and for those who have had previous cardiac surgery.

Traditional surgery requires a sternotomy, where a vertical incision is made along the sternum and the chest bone is cracked; a cardiopulmonary bypass (CPB), a technique in which a machine temporarily takes over the function of the heart and lungs during surgery to maintain blood circulation and oxygen content; and cardioplegic arrest, where the heartbeat is stopped as part of the procedure. Arresting a sick heart in a traditional surgery increases the risk of mortality, extended hospital stays and long recovery. Endoscopic cardiac surgery allows the surgeon to safely perform surgery on a beating heart and avoids any cardiac arrest.

In roughly one-fourth of patients who need valve surgery, more than one valve requires intervention, which increases the risk of mortality and an extended hospital stay. When the tricuspid valve is involved, the risk is much higher compared to any other combination of multiple valve surgeries. UC Health has leveraged its innovative clinical expertise in endoscopic cardiac surgery to overcome these known, significant risks by offering an endoscopic approach to every valvular patient.

As noted above, traditional double and triple heart valve repair and replacement requires CPB and a full-length median sternotomy, as well as direct cannulation of the ascending aorta and the superior and inferior caval veins. These surgeries have variable outcomes and require reconstruction that can be complex and require sutures. While median sternotomy is well-tolerated, many less invasive options are available with access through a small skin incision.

With minimally invasive cardiac procedures, the surgeon gains exposure to the chest with a small incision, in which the procedure is visualized through video assistance. Patients have decreased pain, no injury to any of the ribs, improved respiratory mechanics, reduced risk of perioperative bleeding and wound infection and improved cosmetics when compared to traditional surgery.

More importantly, patients who undergo minimally invasive valve surgery have a shorter intensive care stay and an accelerated recovery. An example of reducing the incision, and therefore the risk, can be seen in minimally invasive mitral valve surgery (MIMVS). MIMVS is performed on patients who need intervention for the mitral valve alone. Over the last two decades, care for patients with isolated disease of the mitral valve procedure has improved; specifically, the procedure has become less invasive, and outcomes have been stable or significantly improved. Similarly, the UC Health triple valve endoscopic procedure has pioneered a novel pathway to perform less invasive, improved outcome procedures for patients who require intervention for multiple valves.

3D modeling leads to a Digital Surgical Plan and provides a map to the patient’s heart valves.

The procedure, performed in July 2021, was unique not only in the operation itself, but also by utilizing a digital surgical plan and the use of medical 3D printing and modeling for planning. A digital surgical map and a physical, hand-held model on which to rehearse the procedure was 3D printed by a team led by Frank J. Rybicki, MD, PhD, UC Health vice chair of radiology and professor at the UC College of Medicine. 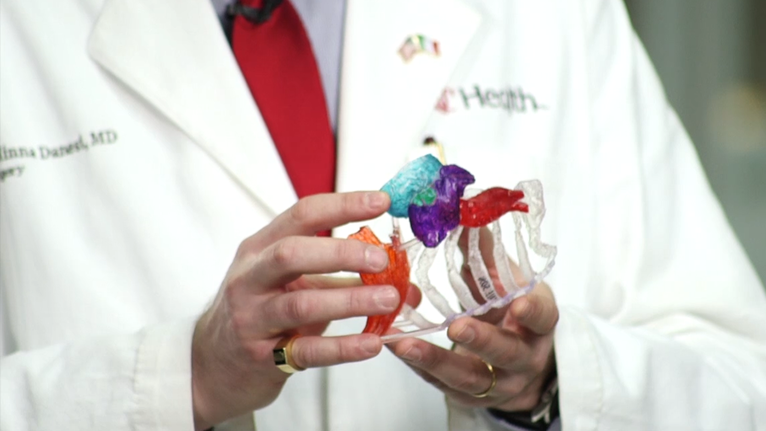 Using state-of-the-art CT images, the team created a virtual map of the surgical route to the heart valves. The team met before every case with Dr. Hinna Danesi, meticulously planning the location of the one-inch incision and then determining how that access route will enable the surgical team to successfully perform the surgery. Each patient at UC Health who receives endoscopic cardiac surgery has the benefit of this customized digital surgical plan created from their medical images and tailored to their anatomy to improve their surgical success. 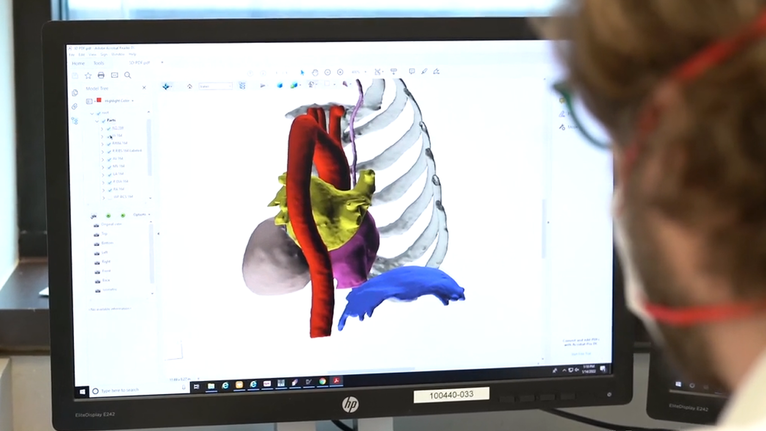 The triple valve case required unique collaboration, because while the entire procedure used only a one-inch incision, Dr. Hinna Danesi required surgical access to three valves with different spatial locations in the heart. 3D anatomic models are another unique feature offered by the UC Health team, allowing for patient-specific planning. For complex heart patients, the surgical team capitalizes on these original methods to conceptualize and rehearse the surgery in the digital space. 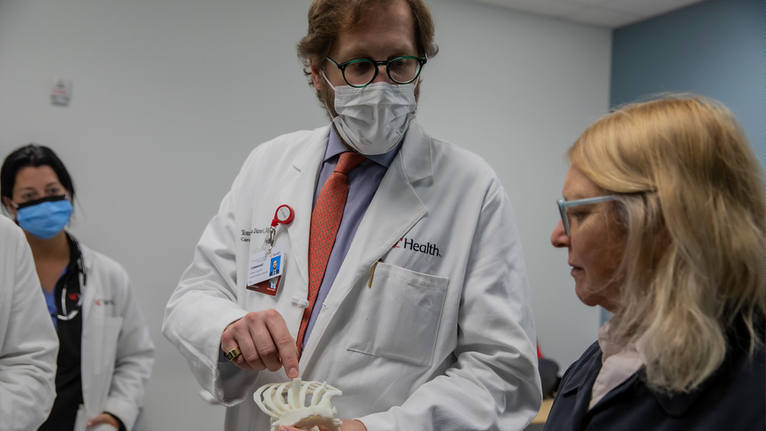 Theoretically, 100 percent of valvular patients at UC Health can benefit from an endoscopic approach because every single valvular patient is evaluated with the research group in digital surgical planning. With the advanced imaging and 3D editing, the UC Health team has met the demand for improved outcomes for high complexity endoscopic procedures, such as multiple valve surgery.

UC Health is the only health system in the region capable of providing every aspect of adult cardiac surgery.

Understanding the impact of patient satisfaction on postsurgical healthcare outcomes, Dr. Hinna Danesi and his colleagues at UC Health are proving that less invasive endoscopic cardiac surgical methods will enhance the quality of life for patients with valvular disease and heart failure.

UC Health delivers innovative, compassionate and leading-edge cardiological care to patients in the Greater Cincinnati-Northern Kentucky region and beyond.