After decades of living with tremors in his hands, Don Ruberg finally found the relief he needed at the UC Gardner Neuroscience Institute. 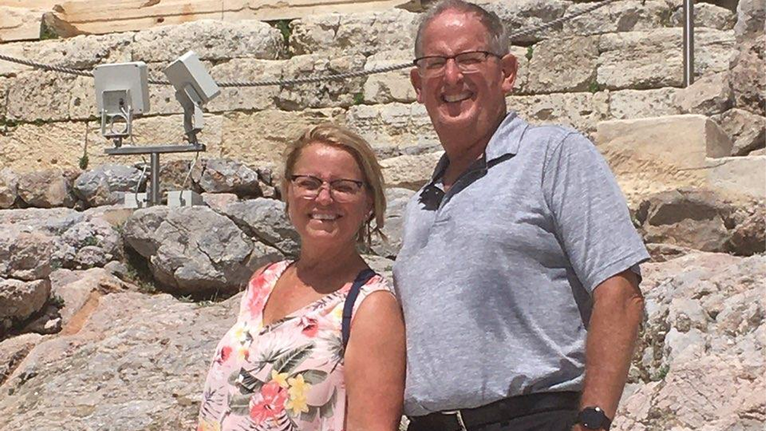 “It has changed my life,” Don Ruberg of Northern Kentucky said emphatically about the effects of a neurological surgery he had called deep brain stimulation, or DBS, “it accomplished everything I wanted.” Deep brain stimulation is a surgical procedure used to help treat movement disorders, such as essential tremor or Parkinson’s Disease.

In college, Don started to develop a small tremor in one hand and was eventually diagnosed with essential tremor (ET)—a neurological disorder that causes tremors in a person’s arms and hands and can affect his or her ability to write, eat or hold objects.

Over the course of 45 years, essential tremor progressively took over Don’s life. “It just gradually got worse and worse, to the point where I would struggle to eat,” he explained. Don is left-handed, and although he had a tremor in both hands, it was worse in his dominant hand. This made it a struggle for Don to accomplish daily activities.

In order to do something as simple as eat, Don had to adapt. He used his right, non‑dominant hand to hold a small spoon, tuck his elbow into his side, lean down close to the plate and then direct the food into his mouth before it fell off the spoon. “That’s okay when you’re eating by yourself at home, but when you’re eating in public at a Chamber of Commerce meeting, that’s embarrassing,” Don recalled.

Don, now retired, spent decades practicing as an attorney. He remembered how self-conscious the tremor made him feel in his profession. “When you go into court and they see your hand shaking, it’s not confidence-inspiring to clients,” he said. It affected his career in so many ways, and he couldn’t type without making numerous mistakes. It got to the point that he couldn’t even read his own handwriting.

Around this time, Don’s daughter was attending medical school at the University of Louisville. As part of the medical school program, his daughter spent time observing each specialty of medicine. While on her neurosurgery rotation, she witnessed a functional neurosurgeon perform a DBS surgery on a patient with ET. She witnessed the remarkable, instantaneous effects and had been pushing her dad to have the surgery ever since.

Don knew of the potential benefits of DBS surgery but was not in a hurry to get treatment. “I do not believe in surgery being a cure for everything,” he said. “You only want it when it’s a last resort.”

After years of finding ways to work around the tremor, Don finally decided that the time had come to have surgery. “Everyone reaches a point where you just have to accept the fact that the impacts on your lifestyle are becoming too significant,” says Don about seeking surgical options in late 2020.

With tongue in cheek, Don tied his career experience to his reasoning for seeking out John P. Sheehy, MD, a neurosurgeon at the UC Gardner Neuroscience Institute and associate professor of neurosurgery at the UC College of Medicine, to treat his essential tremor. “My dad always said you should go to old attorneys and young doctors,” he laughs, “I’m an old attorney; Dr. Sheehy is a young doctor.”

While the years of training required to become a neurosurgeon make it nearly impossible to be considered young, Dr. Sheehy is, relatively speaking, a young neurosurgeon. That is something Don saw as a benefit. “As a new surgeon, he’s trained in all the latest techniques,” says Don. “He’s most up-to-date on all of the science.”

Upon completing medical school at Columbia University, Dr. Sheehy finished his residency at Barrow Neurological Institute. “I was fortunate enough to train with Francesco Ponce, MD, who has a very high-volume practice in deep brain stimulation,” says Dr. Sheehy. He also completed sub-specialty training at the University of Louisville with Joseph Neimat, MD, a functional neurosurgeon who specializes in DBS. “I saw two very different ways of doing it,” says Dr. Sheehy, “and I've combined those two approaches into my own practice.”

At the UC Gardner Neuroscience Institute, a multidisciplinary team involving neurosurgery, neurology, neuropsychology, radiology, nurse practitioners and a DBS coordinator meet collectively to discuss each patient and evaluate how well they would respond to a DBS surgery. Dr. Sheehy and his colleagues determined Don would benefit greatly, and after years of putting it off, Don decided it was time to go ahead with surgery. “When you compare the risks to the rewards, they were very manageable,” he remembers deciding.

In the days leading up to the surgery, technicians performed an MRI on Don, Dr. Sheehy evaluated the images and drew the trajectory for the brain electrode on the MRI. On the day of the surgery, a stereotactic headframe was placed on Don’s head in the preoperative area, and he had a final CT scan. Don was impressed that it was Dr. Sheehy himself who wheeled Don down to the CT scan. “Dr. Sheehy was very involved in my care,” Don beamed.

Dr. Sheehy then merged the CT scan with the MRI and a sophisticated computer system gives Dr. Sheehy the coordinates.. “The frame has all these different dials and settings,” says Dr. Sheehy, “basically we can dial in the right coordinates on the frame to recreate the trajectory for the electrode that I drew on the MRI originally.”

Before the surgery, Don wrote several words on paper to get a baseline of what his handwriting looked like with the tremor.

Once the surgery was ready to start, Don was initially anesthetized to the point that Dr. Sheehy could drill into his skull. Then, the team woke Don up so he could provide feedback through the rest of the surgery.

Andrew Duker, MD, clinical chair of the James J. and Joan A. Gardner Family Center for Parkinson’s Disease and Movement Disorders, professor of neurology at the UC College of Medicine and the UC Health neurologist involved in Don’s care, explains that a variety of tests are performed to monitor how the patient is responding to the stimulation. Dr. Duker will ask patients to hold their hands outstretched, point their finger to the tip of their nose and point a red laser light to a specific spot on the ceiling. “We repeat each of these assessments with different stimulation settings to make sure were getting adequate tremor control,” says Dr. Duker.

The accurate location of the stimulation is crucial to not only control the tremors, but to guarantee there will not be any negative side effects.

Once the patient is being stimulated in the precise location there is rapid and dramatic improvement. “When we are in the right spot, you watch the tremor go away instantly,” says Dr. Sheehy.

“It is pretty amazing to see the improvement of the tremor in the operating room,” says Dr. Duker, “to both the team helping with the operation as well as to the patient.”

Dr. Sheehy says watching that instant result is extremely gratifying. “I think it’s one of the most exciting parts of what I do,” he says.

Dr. Duker remembers seeing how dramatically Don’s handwriting improved after the surgery, and results like these can sometimes be overwhelming. “I’ve had patients who have been unable to write for 30 years,” says Duker, “and they became really emotional in the operating room realizing that they will be able to write again.”

Now, when he runs into old friends, Don proudly outstretches his left hand to show them how steady it now is. He often finds himself convincing others with movement disorders to consider the surgery. In fact, he claims, “I would leap at the opportunity to do this again.”