Coming Back Stronger and Pain Free 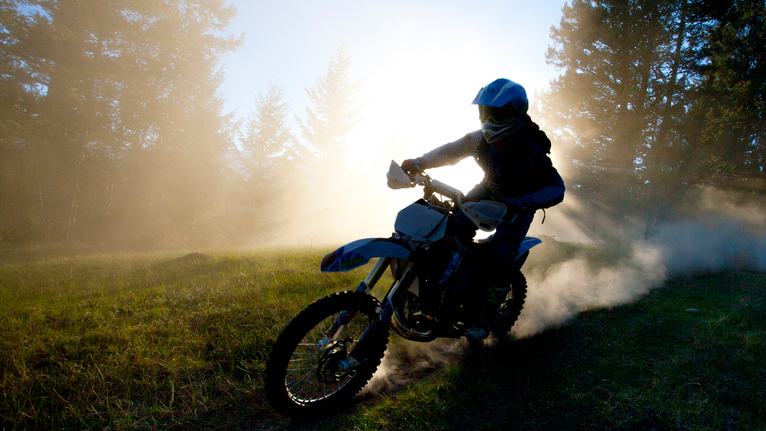 Christian Witt spent the majority of his childhood riding his bike. But as a self-proclaimed “wild child,” a traditional bike would not fulfill his adrenaline rush. As he transitioned into his teenage years, he built a quarter pipe in his backyard and began training and competing in BMX.

BMX is a form of bike racing on hard dirt courses with various consecutive jumps and high-speed curves. With any sport, physical training was part of his practice. BMX racing requires full-body strength training – from arm muscles to control and direct the handlebars, to various leg muscles to peddle and perform tricks.

As a result of the precise control and constant impact on rough terrain, Christian’s body essentially became a shock absorber – putting immense strain on almost every muscle and bone in his body.

The Wyoming, Ohio native broke eight bones during his freshman year of high school alone. “It seemed like every month I was in a different cast,” Christian recalled.

In his 20s, he turned it up a notch, and moved onto motocross racing. Not deterred from the possibility of injury, Christian said that he, “simply got used to having problems.”

By the time he was 30, he welcomed the first of his now three children. From there on out, the majority of his life was dedicated to taking care of his young children. Less of his time was spent training and competing – his primary form of physical activity – and ultimately, he put on weight.

Christian weighed over 300 pounds at his heaviest, and his pain was more widespread.

“My pain affected me financially, physically and emotionally,” Christian said.

Christian’s job as a salesman required him to move around regularly. “At work, I wasn’t motivated to walk over to new customers. I found myself sitting back a little more,” he explained.

Christian was finally sick of being “used to” having aches and pains, so he decided that he needed to take back control and address his pain and overall health – not only for himself but his kids, too.

For two years, he received cortisone (steroid) injections in his right knee, but the treatment exhausted itself. Cortisone injections are a common, non-surgical treatment to relieve inflammation within the knee joint.

His physician referred him to Barton R. Branam, MD, UC Health Orthopaedic surgeon and assistant professor in the Department of Orthopaedic Surgery at the University of Cincinnati College of Medicine. Dr. Branam specializes in knee replacement surgery.

“When Christian came to us, he had severe, end-stage arthritis; a complete absence of cartilage in his right knee,” said Dr. Branam.

“It’s important to feel comfortable around your doctor. Dr. Branam is genuine and down-to-earth,” Christian said.

Together, Christian and his UC Health doctor determined that viscosupplementation was the next best option before moving ahead with surgery.

Viscosupplementation is a final, non-surgical treatment option to alleviate joint pain. This procedure injects hyaluronic acid, a gel-like substance, directly into the knee joint. This acid is a naturally occurring fluid found in joints. People who suffer from arthritis have a deficiency in hyaluronic acid. The injection serves as a lubricant to enable joints to function smoothly, with reduced or no pain.

Despite these efforts, and with the many years of wear and tear on his knees, Christian and his family decided that total joint replacement surgery was necessary. With a family history of arthritis, Christian knew it was only a matter of time when he would likely have to take this step.

“Knee replacement surgery is the only definitive treatment we have for end stage knee arthritis,” said Dr. Branam. “Non-operative treatments for arthritis treat symptoms, but do not alter the structure of the knee or the articular cartilage. We try these conservative measures first, but most conservative measures ultimately give patients incomplete relief of their symptoms.”

Prior to COVID-19, Dr. Branam and Christian chose late-July for his joint replacement surgery on his right knee.

Shortly thereafter, Christian was laid off of work due to the economic impact of the pandemic. He had hoped to move his surgery date up, but with all non-life threatening and elective surgeries on hold, he was unable to do so.

But after several weeks and with some patience, Dr. Branam called Christian as soon as elective surgeries were able to resume to see if he was still interested in moving his total joint replacement appointment up. Without hesitation, Christian agreed. Even in the midst of COVID-19, Christian didn’t have any reservations about going to the hospital.

“You have an image in your mind about what it’s like at the hospital, but at UC Health, it wasn’t that at all,” Christian described. “Everything was very smooth and organized."

Every UC Health patient who has an invasive procedure or gets admitted to the hospital is tested for COVID-19. “We use universal precautions and adhere to all state of Ohio COVID-19 guidelines, including taking the temperature of everyone entering the hospital,” Dr. Branam explained.

Christian recalls having some nerves before his procedure, but thanks to Dr. Branam’s “kind, open and honest demeanor,” he found the confidence he needed while he was heading into the operating room.

“We try to do our outpatient joint replacement surgeries earlier in the day to give our patients plenty of time to recover, have their first physical therapy session and get home,” Dr. Branam said.

Just over a week post-operation, Christian said he was feeling great. With the assistance of an at-home therapist, he was able to walk without any help. “I needed to build up a little more strength, but I didn’t feel pain,” he said.

With the pain in his right knee essentially gone, he has slowly been able to become more active, and ultimately, he lost 25 pounds within a month.

Christian was so thrilled with the outcome of his first knee replacement surgery that just a month later, he had his second knee replacement, now on his left knee – also done by Dr. Branam.

“Since my second surgery, I have been to Lake Cumberland, went camping and took my first bike ride,” Christian said. “I enjoyed the whole process. I’ve had several people ask me how I’ve healed so quickly. My reply is that I had a great surgeon.”