Sandy Mills is no stranger to back surgery. In 2012, doctors diagnosed her with scoliosis with a 35-degree curve to the right. A neurosurgeon in California operated on Sandy for 14 hours to straighten and stabilize her spine. 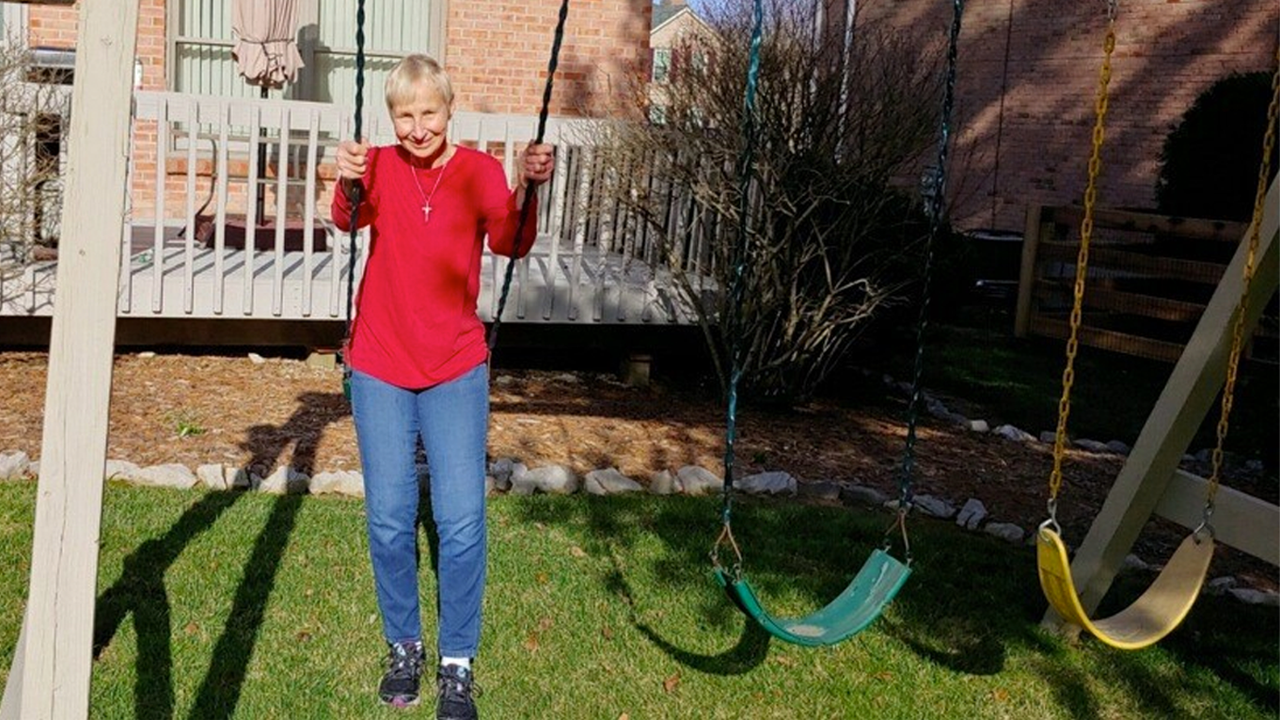 "The surgeon replaced all the discs; had to break all of the vertebrae to restraighten my spine," Sandy recalls. She said the surgeon added 23 screws and rods to stabilize her back, and the rehabilitation required her to wear a cage brace for a year.

When Sandy's friend was scheduled to undergo back surgery at UC Health, she naturally asked Sandy to come along for support. It was following that friend's surgery that Sandy first met Rani Nasser, MD, assistant professor in the Department of Neurosurgery at the University of Cincinnati (UC) College of Medicine and neurosurgeon for the UC Gardner Neuroscience Institute at UC Health, who specializes in complex spine surgery.

Sandy and her friend's husband entered the consultation room following the surgery in April 2019 to receive a report from Dr. Nasser on the outcome. Considering the case took several hours, her friend's husband joked with Dr. Nasser and asked him if he was hungry or needed a bathroom break after all of that time in the operating room. Dr. Nasser’s response still strikes Sandy to this day.

"Dr. Nasser just smiled at him and said, 'I only have one thing on my mind: what are your concerns about your wife? That's what matters to me most.'" Sandy was struck by the sincerity of his comments. She says, "Right then and there, I knew there was something very special about this doctor."

She remembers Dr. Nasser taking his time and drawing pictures so that the patient's spouse would easily understand the procedure. "He explained how things would progress and took his time with every question," Sandy recalls.

Remembering Dr. Nasser's bedside manner, she chose to schedule an appointment with him in March 2020 when she became very concerned about her left knee. Not only was her knee in pain, but at times it would give out. It was causing discomfort, which was keeping her from her daily routine, including the volunteer work she did with five different organizations throughout Greater Cincinnati.

Another doctor in Cincinnati had previously evaluated Sandy and ordered X-rays. When Sandy never heard back from that doctor, she assumed the X-rays showed no problems. Imagine her surprise when Dr. Nasser told her that the myelogram — a specialized diagnostic test that helps detect problems in the spinal cord, nerve roots and other tissue — showed there were major problems.

"It showed that my right rod was broken in two places, the pelvic screws were loose and the right screw was moving close to my spine," Sandy says. Dr. Nasser was shocked Sandy was able to withstand the pain.

"The screws that were placed previously were loose and eroding in her lower back to the point where she literally couldn't sit; she was in that much discomfort," says Dr. Nasser. "Also, the screws were loose up top, which prevented her from standing straight. It's really incredible at what she tolerated for so long."

Dr. Nasser explained to Sandy what went wrong and told her that he would essentially have to redo her previous surgery over the course of two days. Once again, she was impressed with the way Dr. Nasser took his time to explain the plan and listen to her concerns. "He heard every single word I said," she recalls.

Dr. Nasser told Sandy that he would have to redo her previous surgery. To do that, he would first need to fix the front of her spine with a procedure called an ALIF, which stands for anterior lumbar interbody fusion, before he’d be able to fix the problems from the previous surgery. On the first day of surgery, he would stabilize the symptomatic segment of the spine from L5 through the S1 vertebrae with the ALIF. On the second day, he could then replace the corroded screws, revise the decompression that was causing the leg pain and reposition the rods. 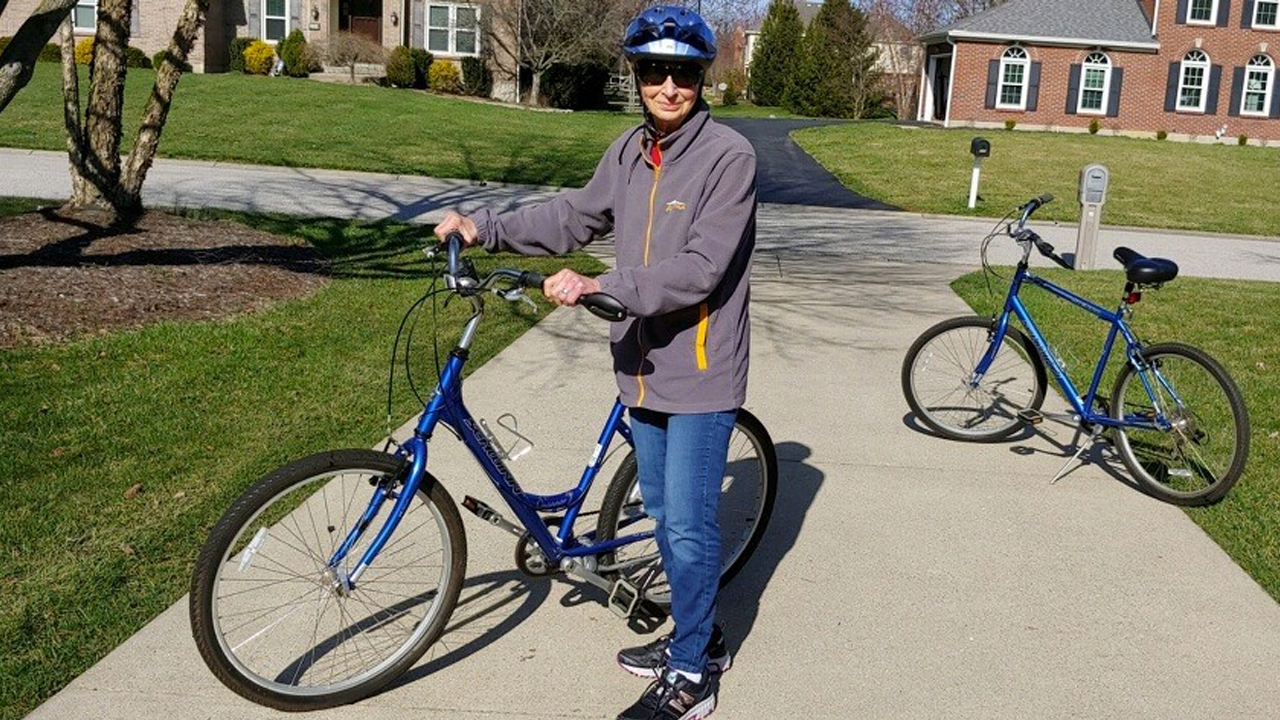 The two back surgeries took place in June 2020, and instantly, Sandy felt relief. "The minute I got in my room, I had no pain," she remembers. "I thought: this is really weird. My left knee doesn't hurt. This is really something where I didn't need any pain medicine. All I needed was my walker and I instantly got up to walk." Sandy says she walked the hallways 15 times in the hours following surgery without any pain medicine. She was in disbelief. "It was unbelievable to me because I had lost so much of my life before surgery," Sandy says. "My legs couldn't walk before surgery, and here I am walking the halls thinking, 'Whoa, this is dramatic.' I was shocked."

When Dr. Nasser came to check on Sandy after the surgery, she remembers telling him, "I can stand up now." She instantly realized all of the ways her life had changed. "I'm not bent forward. I can enjoy taking a deep breath again — because when you're bent forward, you're closing off your lungs. Taking a deep breath is a real gift. I can now put my head back to finish a bottle of water. I couldn't do that before. I'd have to have a straw to help me."

Dr. Nasser attributes her immediate success, in part, to Sandy's resilience and upbeat personality. He says, "If anyone was going to walk around the next day after a major operation, it would be her." Dr. Nasser remembers all of the staff on the unit at UC Medical Center gushing about her personality calling her a grateful and humble person. "Someone like that is not a complainer by nature," says Dr. Nasser. "When Sandy complained, it was literally because the rod was about to come out of her skin. Most people would not tolerate that at all."

Instead of being released to a rehabilitation center, Sandy was approved to go straight home just days after the operation. Shortly thereafter, Sandy was walking up to two miles a day with the assistance of her walker. She was able to walk upstairs, sleep without pain and get back to a normal life. Most importantly to her, she was able to return to the organizations where she volunteers. "I'm very orientated in services," Sandy says. "I love to help, and I am so blessed by that."

Dr. Nasser calls Sandy a "role model patient," and says we can all learn from her. "I think she's a testament to positive thinking," says Dr. Nasser. "If you have a positive attitude and a can-do mindset, there's no reason why you can't undergo a big operation and go home like Sandy did."

Almost a year later, Sandy says she can often be found picking weeds in the garden, volunteering with her favorite organizations and she even intends to skydive later this year. It's a tradition she started years ago, with the plan to repeat it on her birthday every five years. She can't believe how different her life is now. She says, "I have overflowing gratitude for Dr. Nasser's extraordinary blend of professional knowledge and skills with his innate and genuine gift of interpersonal relationship." 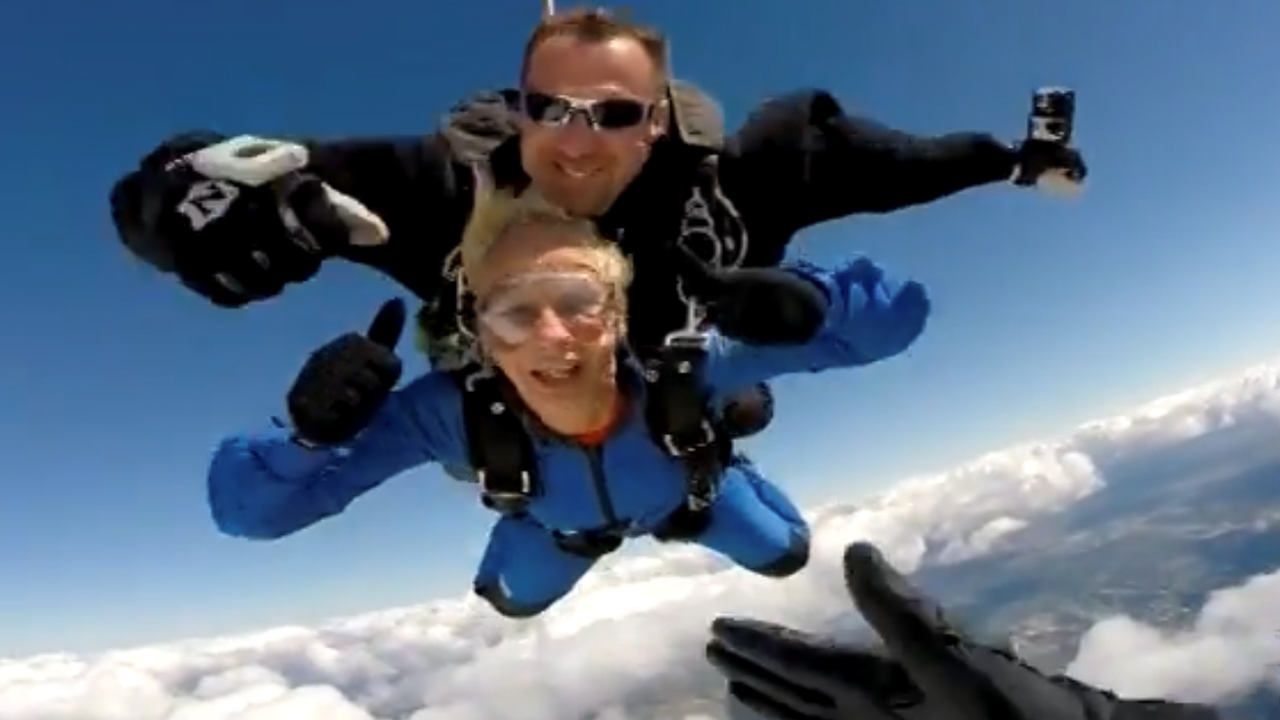