UC Health CVICU Dietitian Becomes Patient in Her Own Unit

Thirty-four years ago, Erin Fussinger was one of four quintuplets who survived after being delivered at University of Cincinnati Medical Center.

She and her siblings spent around three or four months in the Neonatal Intensive Care Unit (NICU), and for the first year, Erin required oxygen.

Despite that critical first year, Erin went on to live a normal, healthy and active life. Growing up, she spent most of her after-school hours doing some form of running, whether it was participating in track, soccer or competing in cross-country. 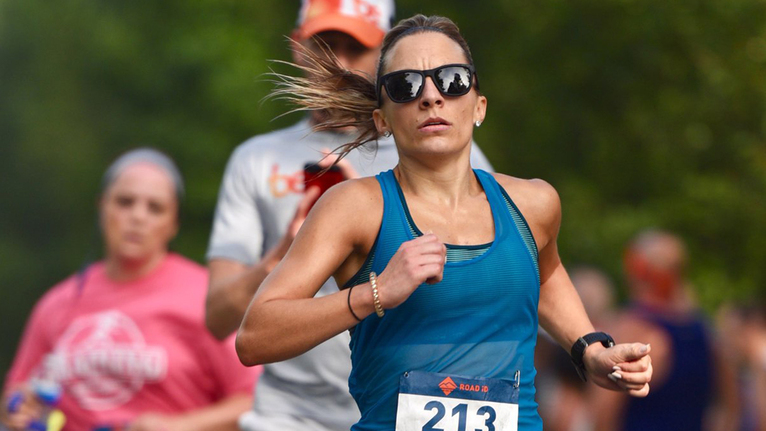 Following high school, she attended Miami University in Oxford, Ohio, to study business, and then ended up at UC to become a registered dietitian. After completing her dietetic internship at a local community hospital, she came to UC Medical Center in 2014. Since 2015, she has worked as the dietitian in the Cardiovascular Intensive Care Unit (CVICU).

Outside of work, she continued to make running a part of her everyday life. “Prior to COVID-19, I was a marathon training coach with Beyond Exercise’s ‘BE Run Project,’ where I helped runners complete specific workouts and kept pace for all runs, whether it was a speed workout or long-distance runs,” Erin said.

Erin spent the majority of her childhood watching her mother train and run over 75 marathons. In 2008, she decided to join her mom for a marathon-training season – from there, she was hooked. Erin’s first race was the Columbus Marathon. Since then, she has run in 18 marathons, including the Flying Pig six times, the Columbus Marathon five times, the Indianapolis Monumental three times, the New York City Marathon two times and the Chicago Marathon one time.

“If COVID-19 hadn’t cancelled nearly all of the races so far this year, I would have been training and completing my 20th marathon in Chicago again this fall,” Erin said.

But it wasn’t just the pandemic that brought Erin’s competition to a halt.

In the first few weeks of May 2020, Erin noticed that she was struggling with her normal exercise routine. She was having some difficulty breathing, and was unable to run her usual pace and distances without having to stop frequently to catch her breath.

“I initially thought the humidity or air quality was the issue and didn’t think too much of it,” she explained. “I also thought that maybe I had iron deficiency anemia again, which I had initially in 2016 after running a lot of marathons and half marathons plus chronic blood loss.” A common issue that many female runners experience.

This time around, she was experiencing similar symptoms that she had in 2016, but pushed them aside for the first week of May since it only happened with exercise. After about 10 days without improvement, Erin decided she would take a break from running and instead, use her mother’s spin bike inside.

Still, Erin was experiencing shortness of breath with exercise, so she knew something was off. It was at that point she decided to make an appointment with her primary care physician.

On May 21, 2020, 6:30 a.m., the morning of Erin’s appointment, her mom talked her into taking a run. Not even a quarter-mile in, the fervent marathon runner had to stop two times just to catch her breath.

“I was starting to get frustrated and almost panicky since trying to run was a challenge,” Erin recalled.

She decided to walk 3 miles instead of running her usual 5-6 mile route. Even while walking, she noticed a shortness of breath.

That afternoon, Erin got her blood drawn at her primary care office. After an assessment, her physician considered a few causes for her symptoms: an iron deficiency (low likelihood); COVID-19 diagnosis (low likelihood); or possibly a blood clot (higher likelihood).

That night, at 11 p.m., she received a call from her doctor’s office informing her that her D-Dimer lab value was significantly elevated and that she needed to get to the emergency room immediately. There was a high likelihood that Erin had a blood clot in her lungs.

Erin called her parents to take her to the hospital.

“We decided UC Health would be best since I work there, know a lot of people and my dad used to work for the Emergency Department for 40 years before he retired,” Erin said. “Also having worked in the CVICU for more than five years, I knew there was a chance I would end up in my own unit depending on how bad the possible blood clots were.”

They arrived at UC Medical Center’s Emergency Department entrance. Due to COVID-19 visitor restrictions, Erin was essentially dropped off at the front door.

From there, Erin was given an IV and she immediately was taken to get a CT scan, a more thorough X-ray of the body, showing tissues, vessels and bones.

“The CT scan results came back and confirmed I had large bilateral pulmonary emboli in both lungs and there was evidence of right heart strain,” Erin explained. There were blood clots in both sides of her lungs.

She was then given a blood-thinning medication to treat and prevent more clotting. After being assessed by the Pulmonary Embolism Response Team (PERT) and cardiology team, sure enough, Erin was admitted to her unit, the CVICU, for overnight observation.

“The UC Health PERT Program, established in February 2018, consists of a multidisciplinary team focusing all of their efforts on the care of patients who present with intermediate to high-risk pulmonary embolisms.” said Suzanne Bennett, MD, UC Health anesthesiologist, director of critical care medicine and associate professor of anesthesiology and critical care medicine at the UC College of Medicine. “This multidisciplinary approach allows for the streamlined evaluation of patients, formulations of comprehensive treatment plans and rapid mobilization of resources to provide the highest level of care in our region to those patients suffering from these life-threatening pulmonary embolisms.” 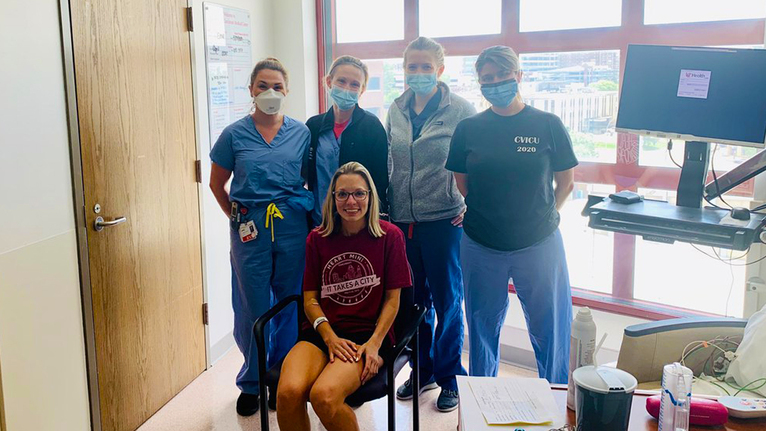 Finding some comfort in her admittance, Erin recalled, “I was relieved to be in my unit because I already knew all of the nurses and doctors since I work with them every day.”

On May 22 and still without visitors from friends or family due to COVID-19, Erin was brought to the cardiac catheterization (cath) lab for an EKOS catheter procedure; this involved inserting two sheaths into her right femoral vein, located in her leg. Then, EKOS catheters were placed inside the sheaths to deliver a tissue plasminogen activator (tPA) and ultrasound waves directly into her lungs, where the blood clots were located, in an effort to break up the clots.

After a successful EKOS catheter procedure, Erin returned to the CVICU and was on bed rest for eight hours – where for six of those hours, the catheters remained in place within her femoral vein.

The following day, Erin started on an oral blood-thinning medication that she would need to take for a minimum of six months.

Finally, on May 24, Erin was discharged from the hospital, but required supervision for the first few days at home. She was able to walk, but with strict rules of no running, biking, heavy lifting or any other activity that could cause her heart rate to increase.

The next month required numerous follow-up appointments with her primary care physician, pulmonologist and hematologist to track her progress.

Despite the severity of her pulmonary emboli, “Recovery mainly consisted of taking it easy. I was determined to not lose all of my fitness or endurance, so I made a goal of walking 25 miles per week until I was cleared to run again, which I wanted to achieve no matter how slow it took me to keep my heart rate down,” said Erin.

Erin returned to work just one week after being admitted to the CVICU. For the first six weeks of her recovery, she was on a strict walking-only workout routine, but once she was cleared to run, she was off.

“The severity of Erin’s condition placed her at an up to 30% risk of dying, if left untreated,” Dr. Bennett said. “The success of her recovery is remarkable but not surprising, given Erin’s personal motivation and pre-pulmonary embolism outstanding health, coupled with her decision to seek care at UC Health, where we have an established PERT program.”

“I’m still paying attention to my body and trying not to overexert myself. I’m getting closer and closer to my pre-pulmonary embolism (PE) run pace and am already up to 11 1/2 miles for longest run, post-bilateral PE,” she said. Hills and steps are still somewhat tiring for her. This fall, she plans to run in the virtual Queen Bee Half Marathon.

Erin’s care team found that there are still some small remaining blood clots in her lungs, so Erin will continue to follow up with UC Health Cardiology and Pulmonology physicians over the next few months.

The whole situation was completely unexpected for Erin and her family. Having previous medical knowledge from working in the CVICU and knowing how fatal a pulmonary embolism can be if undetected, Erin was understandably fearful for what could have been.

“My bilateral pulmonary emboli most likely occurred due to estrogen in my birth control pills and my unknown clotting disorder, Factor V Leiden,” said Erin. “I had no other reasons for a blood clot – the doctors called it a perfect storm.”

However, in the midst of it all, she recalls feeling, “oddly calm” because if she were going to end up in her unit, which she did, she would be with her UC Health work family, and she knew that she had the best team caring for her.

Erin credits living a healthy lifestyle and staying in good shape to what helped her have a successful and speedy recovery.

Erin wanted to provide several special shout-outs to some of the members of her care team.

The entire Critical Care Anesthesia team (CCAT) / Pulmonary Embolism Response team (PERT) team, the CVICU staff, and specifically the nurses who were assigned to me. I work with this team of doctors and nurses every day, and they are amazing!

Courtney Jones, MD, was the attending who first saw me in the emergency room, along with Kim Roberts, NP, for the PERT team consult. During that scary time in the ER, they were exactly who I would have wanted to see to help calm me down and reassure me that everything was going to be okay.

Gretchen Lemmink, MD; Suzanne Bennett, MD; Kari Gorder, CCAT Fellow; Cara Hamre, NP; and Beth Weishaupt, NP, also went above and beyond to make me feel comfortable, check on me, and feel less awkward being in my own ICU. They all know and get how much running is a part of my life and helped make medical decisions that would help me get back to my running normal as soon as possible

Overnight RNs, Rachael and Kelly, and daytime RNs Katie, Stephanie, and April were so kind and provided the best care when I needed it but also respected my privacy too which I much appreciated.