In November 2017 at the age of 30, Ashley Lahmer was looking forward to motherhood and all its glory, including cuddling her new baby boy, Blake. 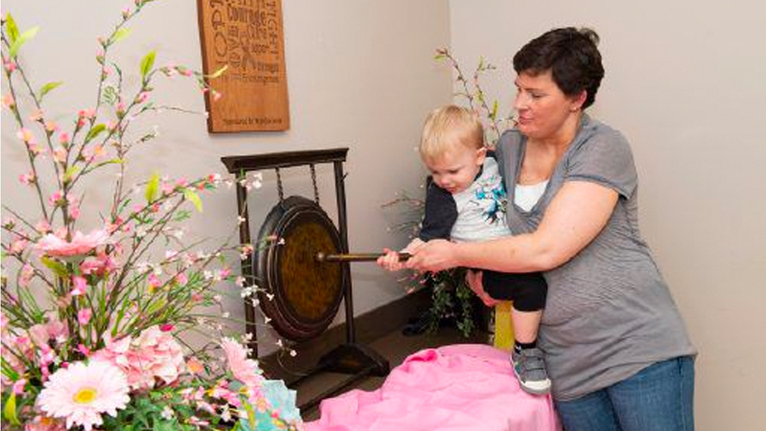 However, several months after his birth, in February 2018, a startling discovery redirected her attention: she noticed a lump in her left breast, which she initially attributed to a clogged milk duct.

“If I had one piece of advice for women, I would tell them to not ignore any symptoms,” she says. “I almost did.”

But ultimately, she saw her obstetrician/gynecologist at an area health system who referred her for a biopsy.

“I was sitting at work toward the end of the day when they called to tell me that it was cancer,” she says. “I remember the words so clearly: ‘We did find some cancer.’ And all I could think was, ‘I can’t; I just had a baby.’ The drive to my parents that day to pick him up was a blur. Everything kind of went silent.”

But Lahmer was on a mission to tackle cancer head on and decided to get a second opinion at UC Health with Elyse Lower, MD, oncologist and professor of internal medicine at the UC College of Medicine. After an immediate connection with her, Lahmer decided to stay.

Lahmer says she loved her entire team, especially the staff at the Proton Therapy Center, who she misses seeing daily.

“I had incredible support by my entire care team at UC Health in addition to my parents and my in-laws, who often came to stay with Blake while I was recovering from treatment,” she says. “It’s amazing how some people who I didn’t know very well or hadn’t seen in years came out of the woodwork to help me and my family during this time. It’s very humbling.”

Lahmer, who is now celebrating six months of being cancer-free, says that above all Blake has been her light in darkness. She even brought him, as well as her husband, Ian, and parents to the official dedication of the gong at the UC Health Barrett Cancer Center in April 2018.

“He really helped me get through it and keep fighting,” she says.