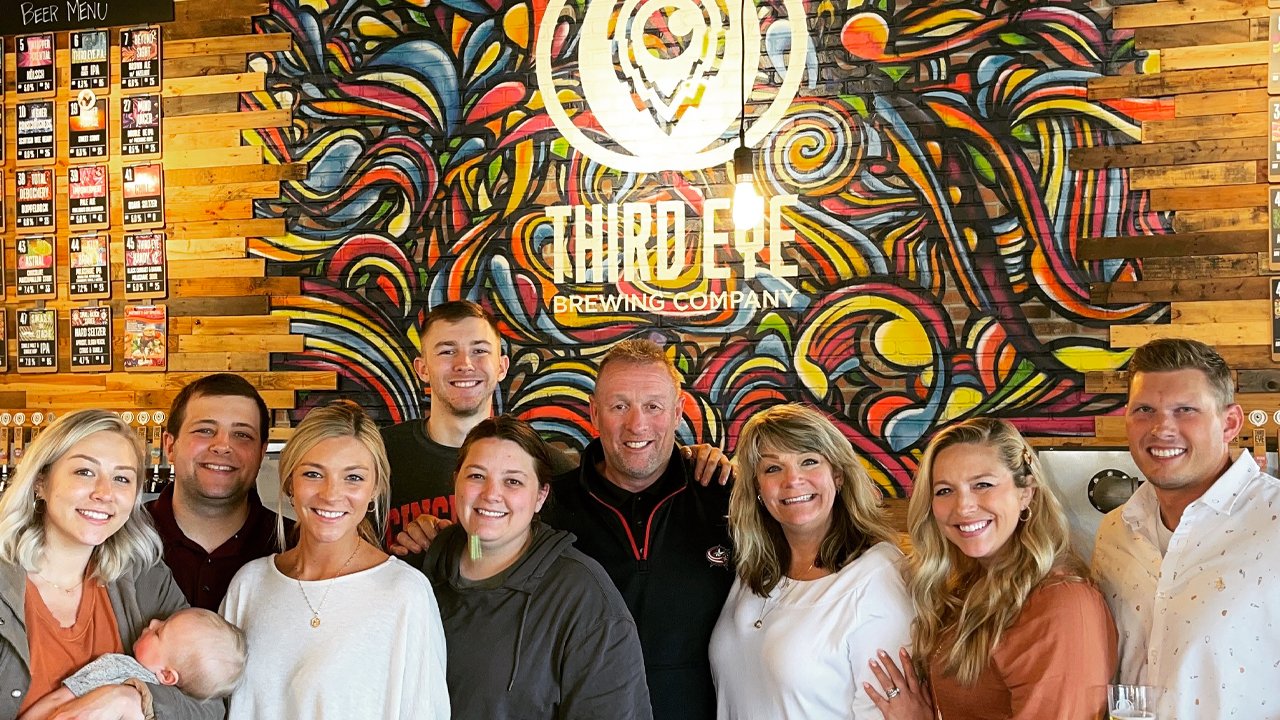 Seven years ago, Tina Singler woke up and began her busy August weekday — getting her children to their first day of school, then heading to work at the Colerain, Ohio beauty salon she’s owned for 14 years, called SHAGZ A Salon. She knew she had a midday eye exam scheduled; what she didn’t know was that her life was about to be flipped upside down.

Tina was searching for a treatment to fix her right eye, which was irritated and watery for several months. During those months, she took a break from wearing her contact lenses on the advice of her optometrist, but the symptoms continued. She was then referred to a dry eye specialist who said the problem most likely stemmed from heavy eyelids and that Tina may need surgical correction.

Tina was sent to the office of Jeffrey A. Nerad, MD, an ophthalmologist at Cincinnati Eye Institute (CEI) who specializes in eyelid, cosmetic and reconstructive facial plastic surgery.

She was there on her lunch break that afternoon in August 2014. She hoped it would be a quick exam and that she’d leave with a treatment plan.

She was examined by a physician assistant and remembers how silent he was for the 45 minutes of tests before he excused himself to speak with the doctor.

“They came back into the room, and Dr. Nerad said I needed to immediately go get a CT scan at the nearest hospital and come back the next day with the films in hand,” said Tina. “I listened to him and got the imaging, but it didn’t concern me at the time because I’d seen so many doctors, and this was just another step to fixing the eye issues.”

Dr. Nerad brought Tina into his office and delivered news that would forever change her life — the CT scans revealed a brain tumor.

“I didn’t understand how it could be possible,” said Tina. “All I remember is asking what I should do, and he said I just needed to go home and spend time with my family; he’d take care of the rest.”

Dr. Nerad referred Tina to Yash J. Patil, MD, associate professor in the Department of Otolaryngology at the University of Cincinnati College of Medicine, director of the Adult Airway Reconstruction Program and a UC Health physician. Dr. Patil performed Tina’s biopsy, which came back as sinonasal undifferentiated carcinoma (SNUC) — a rare cancer of the nasal cavity and/or paranasal sinuses.

Tina’s diagnosis happened to fall on a day she and her family had eagerly been looking forward to. High school football season was kicking off at Nippert Stadium on UC’s campus, with a tense rivalry between Colerain and Elder High Schools.

“I told my family they still needed to go to this game; it was something we’d all been looking forward to,” said Tina. “My daughter was entering her senior year of high school and was an emotional basket case over my diagnosis. She spent part of the time with her friends, before sitting with her dad and brother for the rest of the game.”

Only about 2,000 people are diagnosed with SNUC in the U.S. each year. The low incidence of diagnoses makes it difficult to determine survival rates, with medical literature reporting a five-year survival rate varying widely from 6% to 74%, according to the U.S. National Center for Biotechnology Information (NCBI). SNUC treatment protocol varies widely as well; numerous therapies have been applied with limited success since the first SNUC case was reported in 1973.

Sinus and nasal cancers are rare; SNUC is a subgroup of an already uncommon tumor.

“There is no known cause or prevention for this cancer. The reality is that several cancers are caused by random chance — a bad mutation happened, the cell was able to invade the immune system, and in Tina’s case, that’s what we determined,” said William Barrett, MD, director of the University of Cincinnati Cancer Center, professor and chair of the Department of Radiation Oncology at the UC College of Medicine, and medical director at the UC Health Barrett Cancer Center.

Frequent transformations happen within normal tissue, as cells die and are replaced by new cells. Most mutations lead to the cells naturally dying, but cancer occurs when cells become harder than normal: growing, dividing and multiplying at an aggressive rate that takes over healthy cells.

Under the microscope, SNUC is aggressive — the cells rapidly dividing and invading surrounding tissues — characteristics that reveal a high propensity of the cancer spreading quickly.

“Being diagnosed with SNUC usually happens because of serendipity, where a patient has a CT scan for another reason, for example, and the tumor is found by happenstance,” Dr. Barrett explained. “When the cancer has progressed, that’s when patients experience symptoms.”

Tina’s case was presented during a patient conference at the UC Cancer Center. SNUC is usually treated by surgically removing the tumor, but new research shows novel ways to fight the aggressive cancer.

“About 25 years ago, we recognized traditional treatment such as surgery wasn’t optimal for patients,” Dr. Barrett said. “Tina’s tumor was very infiltrative; it was abutting her brain; the tumor had grown through the bone of her skull and was pushing against her brain — if it had been found later, it would have invaded her brain and that’s rarely curable.”

Dr. Barrett explained the location of Tina’s tumor was in such a delicate area he didn’t believe surgery would be satisfactory. An adequate cancer surgery involves removal of the tumor and surrounding tissue in case it holds microscopic remnants of cancerous cells. SNUC is too close to vital tissue: the brain, the cranial nerves, the eyes and the optical nerves.

The tumor was so large it had pushed Tina’s right eye out of place, deteriorated the skull and was pushing through the derma layer of her brain.

The UC Cancer Center is one of the first centers to treat SNUC without surgery. Instead, a unique multimodal therapy approach was applied.

Tina was treated with a nonsurgical combination of chemotherapy and radiology over seven weeks. She underwent 35 rounds of radiation and every three weeks in between had chemotherapy, both infusions and seven days’ worth of chemotherapy pills to take at home.

“It’s a lot to go through as a patient, but Tina was able to work her way through it all, tolerating the treatment well,” said Dr. Barrett.

“Survival rate is about 50% with our nonsurgical approach. If surgery is performed, unfortunately almost nobody is cured. It depends on where patients are seen and the kind of treatment they get, but it’s generally low.”

An outpouring of support helped keep Tina going. “We had to buy an answering machine because of the number of calls from family and friends. I’m blessed to have so many caring people on my team,” said Tina.

Tina’s sister-in-law started a CarePage to help relieve the concerns of people and give regular updates.

“I began writing on that page every single day; it became my new routine while I couldn’t work,” said Tina. “I documented every step of my journey. It became a detailed journal about what I went through. It was cathartic for me as a workaholic — I needed some purposeful structure to my days — so I’d see my husband off to work, my kids to school and then sit down to write.”

Tina turned those journals into two hardcopy books to remember this pivotal time of her life as a 47-year-old mother to five children, a wife, business owner and a SNUC survivor.

At the time, the Singler’s oldest daughter, Cati, was a senior at Ohio State University. Their second daughter, Kelsi, was in the Navy. Their third daughter, Kari, was in town working, and their son, Robbie, was entering the eighth grade.

Their youngest daughter, Kyli, took charge of Tina’s care. “She took command of everything from communicating between family members, to making sure my spirits didn’t get down,” said Tina. “Kari would tell me we were going to the store, for example, and I’d say I didn’t want to. Kari said, ‘Mom, I don’t care, we don’t have to buy anything, but we’re going to get a shopping cart and walk around,’ She made sure I didn’t have time to sit on the couch all day.”

“The purpose of the scans is to see the local extent of the tumor and if it’s spread anywhere else, which fortunately wasn’t the case with Tina,” Dr. Barrett explained. “She continued to be monitored with regular exams and imaging, and thankfully, her scans are clear. At this point, she’s far enough out that it’s highly likely she’s considered cured of cancer.”

Subspecialists at the UC Cancer Center are experts in even the most complex and rarest forms of cancer, including head and neck cancers. The robust care team works together to deliver highly specialized, world-class care through pioneering research and a spirit of collaboration.

“We tell our patients that our expectation is that they’ll be helped, cured and back to life as it was for them before the diagnosis,” Dr. Barrett said. “We’re here to support them all the way through in every way we can — together, we’ll get through it.”

Tina wants her story to offer hope to SNUC patients and their families across the world. She is still part of an online SNUC support group, a rare find for such a rare disease.

“Dr. Barrett is the most amazing human being, he’s an icon. Before my first radiation treatment, he popped down to make sure I was OK,” said Tina. “I told him if he couldn’t promise me that I’d get through this, then I don’t want all the treatments, I said that someday my kids were going to get married, and I needed to be there. Dr. Barrett said, ‘Tina, you will.’”

Tina was joyfully present as her eldest daughter, Cati, got married. Recently, Cati gave birth to a baby boy, Tina’s first grandchild. His name is Barrett, in honor of Dr. Barrett.

“We did not pick this journey, we didn’t have a plan for this, but it couldn’t have unfolded more perfectly — God led us to miracle workers at UC Health,” said Tina.