In the fall of 2019, Carl Smallwood of Memphis, Tennessee, was newly retired and excited for the next chapter of his life. 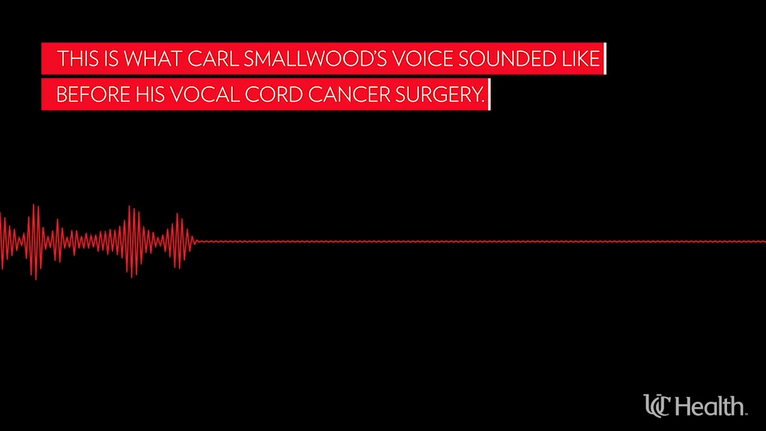 In just a few months, however, that would all change as he was diagnosed with laryngeal cancer, also referred to as vocal cord cancer.

“It really isn’t until you hear your name and cancer in the same breath that it shakes you,” Carl said.

Prior to his cancer diagnosis, Carl and his wife of 51 years spent the majority of their lives together, raising their three children and traveling the world for Carl’s job in supply chain management – living in at least seven different states and even in a handful of Nordic countries.

After living in Oslo, Norway, for some time, Carl’s company offered him an executive promotion that would take him and his family to Tokyo, Japan. Before making the commitment, they first traveled there to see if they would be interested in calling it home.

While in Tokyo, Carl received news that his father, who was living back in Memphis, had just been diagnosed with an aggressive form of prostate cancer. Carl decided to decline the promotion, and instead, move his family back to Memphis to care for his ailing father.

After his passing and Carl’s transition into retirement, Carl and his wife decided to move to Cincinnati, Ohio, to be closer to his daughter and grandson. Now in a new city, Carl wanted to find a primary care physician.

In December 2019, Carl made a new patient appointment with Oded Zmora, MD, UC Health primary care and family medicine physician, who today, he credits for ultimately saving his life.

During his appointment, Dr. Zmora noticed Carl’s voice was rather hoarse and wanted to send him to an ear, nose and throat (ENT) specialist. Growing up, Carl’s voice was always a little raspy, so he didn’t think much of it.

“It would have never crossed my mind to go see an ENT specialist,” said Carl. “I figured an ENT appointment was, frankly, going to be unproductive time.”

Regardless, he made the appointment and saw Aaron Friedman, MD, UC Health laryngeal surgeon and associate professor of otolaryngology at the University of Cincinnati College of Medicine. Dr. Friedman specializes in treating voice, airway and swallowing disorders.

During the appointment, Dr. Friedman used a small camera to visualize Carl’s voice box (larynx) and vocal cords within it.

“The best way to evaluate hoarseness is to both listen carefully to a patient’s voice and to directly examine the structure and function of the larynx, an organ whose health is vital to good voice,” Dr. Friedman said. “We routinely use state-of-the-art digital videostroboscopy to specifically examine the vocal cords, which vibrate faster than almost any other part of the body – often 100-200 times per second during speech.”

“The appointment was pretty fascinating to me,” Carl recalled. “Dr. Friedman would play back the video showing the scope so that I knew exactly what he was looking at and what we were talking about.”

Carl’s fascination quickly took a turn after Dr. Friedman found that one of his two vocal cords was covered with a malignancy, or cancerous growth.

Wasting no time, Dr. Friedman discussed possible next steps with Carl. The two main treatment options were radiation or surgery – radiation being the more common treatment.

“My brother-in-law had throat cancer, and I remember him going through a lot of struggles with radiation,” said Carl. His brother experienced a lost sense of taste, dry throat and mouth and other unpleasant symptoms that can be associated with radiation within the throat. “All I could think was, ‘Man, I don’t want any of that.’”

Carl expressed his concerns to Dr. Friedman and wanted to avoid radiation all together if he could. Dr. Friedman agreed that the best approach would be surgery so that he could remove the disease, as well as attempt to restore Carl’s speech and voice back to normal.

When Carl was diagnosed with vocal cord cancer, memories of his father’s cancer diagnosis came back. He remembered that his father called all of his kids and grandkids to tell them what was going on.

“So that’s what I did,” Carl said. He called his kids and was very upfront about the news he was just given. To no surprise, his family was incredibly supportive.

Aside from love and support from his family, Carl also found hope in his own faith. “I spent a lot of time thinking about my faith,” he said. “All the time I have now is a gift.”

In January 2020, Carl scheduled his surgery with Dr. Friedman, who has over 10 years of experience treating patients with vocal cord cancer.

“Surgery has the advantage of being more precise in treating vocal cord cancer than radiation, which is especially important when only one vocal cord is diseased and the remaining other vocal cord is normal, as it was in Carl’s case,” Dr. Friedman explained. “Achieving the best voice outcome is about safely preserving as much normal vocal cord tissue as possible.”

For Carl’s surgery, Dr. Friedman used the KTP laser, one of the recent advancements in treating vocal cord cancer, which works by selectively targeting the blood supply that cancers need to grow.

Even today, the KTP laser technique is not widely used among general ENT specialists or even many laryngologists due to the extensive learning curve to using the technology.

“We use the laser to remove the cancer with ultra-narrow margins, so that the healthy surrounding vocal cord vibratory tissue can be maximally preserved, giving a patient the best chance of saving or many times, even improving their voice in the process,” Dr. Friedman said.

“I didn’t know anything about the laser technique that Dr. Friedman was going to do, but I reminded myself that I was avoiding the possible devastation of radiation, so this was my only hope,” Carl explained.

Dr. Friedman found the malignancy to be deeper and more widespread than the scope at his initial appointment was able to show, extending the length of the procedure.

Carl’s wife and kids anxiously waited at the hospital. Finally, Dr. Friedman came out and put his family at ease. Carl began his two-day recovery at UC Medical Center.

“We were conservative in admitting Carl for a few days of observation due to the slightly deeper nature of his cancer,” Dr. Friedman explained.

Throughout his time at the hospital, Carl knew he was in good hands with his care team.

“Dr. Friedman is a good human being and a good doctor. In addition to his expertise, he has great bedside manners – his whole team does,” he said.

Despite a successful surgery, there was still more work to be done.

At Carl’s first follow-up appointment post-surgery, Dr. Friedman used a scope to see how he was healing and to establish a baseline to track his progress.

“Again, the whole time, Dr. Friedman told me what he was doing, why he was doing it and explained the approach he was taking,” Carl said. The epicenter of the cancer was healing well, but during office follow-up exams, Dr. Friedman found that there were white cells at one location in the periphery that looked concerning.

“Dr. Friedman told me that this area looked potentially pre-cancerous and that it would be best to do a secondary [outpatient] surgery to biopsy and treat the cells,” Carl continued.

Carl’s second surgery took place in July 2020 in the midst of the COVID-19 pandemic. Despite the pandemic, Carl had no worries about going to UC Medical Center. “I felt perfectly at ease with the steps that every employee was taking at the hospital,” he said. 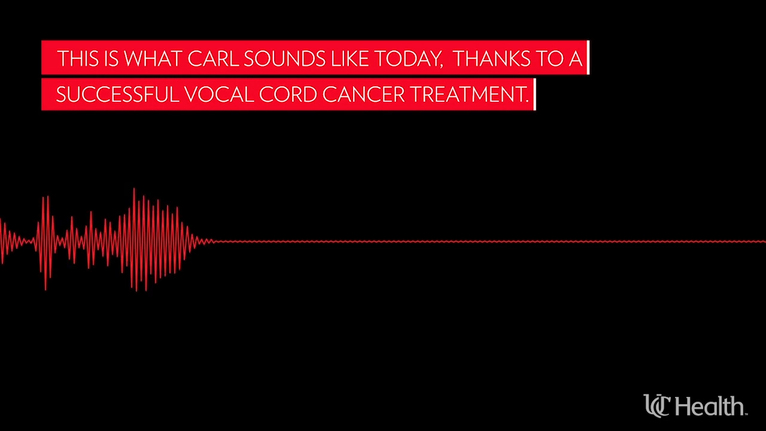 Today, Carl’s throat and vocal cords continue to heal, and his voice is almost completely restored with minimal hoarseness. More importantly, there are no signs of his cancer returning.

With his health on the mend, he and his wife are now in the process of moving to Florida to enjoy their retirement and to be closer to more family.

Carl travels back to Cincinnati to see Dr. Friedman every three to four months for cancer surveillance. As a bonus, this allows him to see his family members who still live there.

“Dr. Friedman was more than happy to help me find another physician in Florida,” Carl said. “But when you’re at that point with your life and you have someone you feel confidence in, you wouldn’t want to see anyone else.” 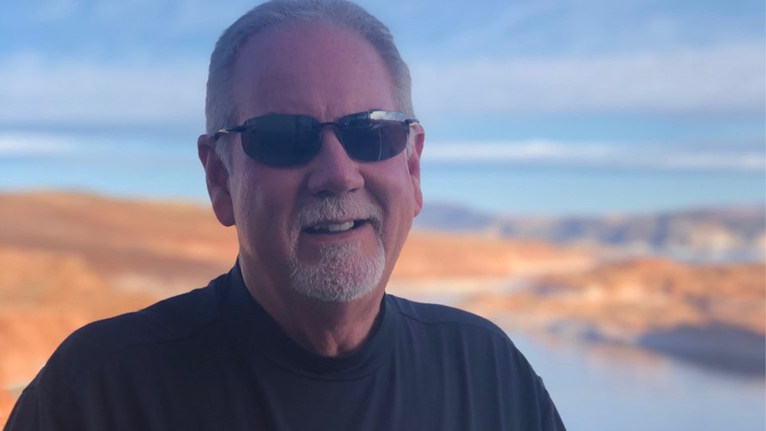