Mike Mercier of Florence, Kentucky, is not unlike many people who have faced lifelong challenges with weight. 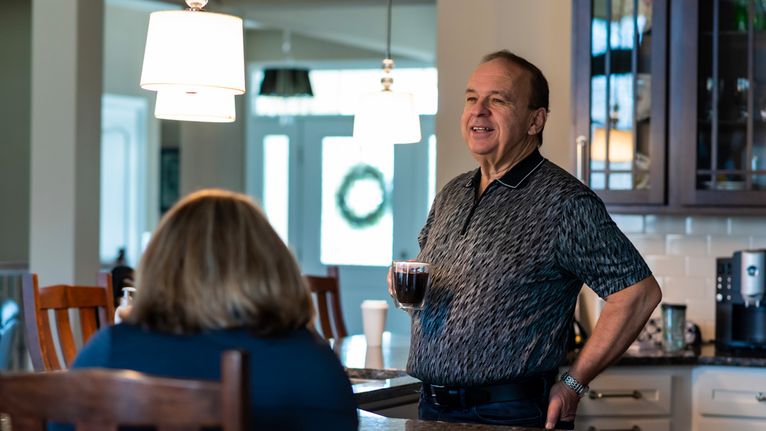 Eventually, he was diagnosed with a rare genetic condition that created additional challenges with achieving weight loss.

Originally from Canada, Mike became a naturalized U.S. citizen 20 years ago. The second in a family of five children, Mike recalls being obese for as long as he can remember.

“I have been overweight since I was a child,” Mike says. During his youth, he was told that he was simply big-boned, and was described as having a husky physique. He admits that he knows he suffered from low self-esteem when he was younger, and he attributes some of his confidence challenges to being overweight.

“I weighed 215 pounds at age 13,” he shares. Growing up in a family who owned a construction business, he started working for his father as a young child. The work was physically demanding, and he was expected to be as big and as strong as the adult workers.

When he started college, he realized that his weight was preventing him from making new friends, especially when meeting girls.

“I decided to act,” he says. “I began to rethink the food choices I was making. I was determined to lose weight.”

He used a combination of fasting techniques to reduce his caloric intake while also eliminating foods with low nutrition. Snack foods like potato chips, candy bars, soda, ice cream and other desserts were removed from his daily diet. He worked hard to incorporate natural foods into his diet, such as fresh fruits and vegetables, and paid more attention to fiber, focusing on eating foods with whole grains.

At that time, he also had an interest in motorcycles and wanted to compete in races. With the modified diet and exercise, he got down to 175 pounds—his lowest weight as an adult. He was 20.

Eventually, Mike began to encounter unexpected medical issues. “I was having issues with my muscles. My muscles were breaking down, and I started experiencing weakness, rigidity and pain.”

At that time, he and his family were living in Iowa and he received medical treatment from genetics specialists at the University of Iowa.

Mike was diagnosed with CPT II deficiency, or carnitine palmitoyltransferase, which is a condition that prevents the body from using certain fats for energy, particularly during periods without food, or fasting.

What Is Myopathic CPT II Deficiency?

The myopathic deficiency that Mike has endured is the least-severe type of CPT II deficiency. This form is characterized by recurrent episodes of muscle pain (myalgia) and weakness and is associated with the breakdown of muscle tissue (rhabdomyolysis). The destruction of muscle tissue releases a protein called myoglobin, which is processed by the kidneys and released in the urine (myoglobinuria), causing the urine to be red or brown.

This protein can also damage the kidneys, in some cases leading to life-threatening kidney failure. Episodes of myalgia and rhabdomyolysis may be triggered by exercise, stress, exposure to extreme temperatures, infections or fasting. The first episode usually occurs during childhood or adolescence. Most people with the myopathic form of CPT II deficiency have no signs or symptoms of the disorder between episodes.

Some myopathies are genetic and can be passed from parent to child. In Mike’s case, his parents unknowingly passed the gene to him.

Living with a Genetic Deficiency

Over time, Mike’s condition caused significant stress on his kidneys—fast forward to age 50. While he continued to tolerate the condition, it limited his activity, causing weight gain. It was a balancing act for a while. When he tried to lose weight by cutting calories, fasting or exercising, doing so triggered more muscle weakness and pain, along with increasing the risk of harming his kidneys.

When Mike and his family moved to Northern Kentucky in 2015, he hired movers to help.

“I’m a do-it-yourself person,” Mike says. “I get physically involved.” He jumped in and helped the movers with the furniture and other household items.

This action resulted in the worst bought of  his condition yet. As is characterized, his urine was the color of cola. His muscles were so weak that he checked himself into the hospital. With just 5% kidney function, he was hospitalized for one week in order to treat and resolve his kidney failure. He recovered and returned home.

Because CPT II is a condition that causes fatalities in infants, Mike began seeing the genetics experts at Cincinnati Children’s Hospital and Medical Center. Their special expertise in genetic conditions enabled Mike to live with CPT II without serious repercussions.

Weight loss surgery has shown to be the most-effective treatment for obesity, especially for those who need to lose 100 pounds or more. Many people never consider weight loss surgery because they think it is too risky, although research shows that new surgical techniques—such as the sleeve gastrectomy performed at UC Health—result in a high level of weight loss.

Further, weight loss surgery can increase your chances of living longer by counteracting diabetes, hypertension and high cholesterol. It can also reduce the risk of cancer, as well as other associated health conditions.

Mike received his pre-and post-surgical care at the Weight Loss Center clinic located on the Clifton Campus near downtown Cincinnati. During his consultation with Bobby Johnson, III, MD, UC Health bariatric surgeon, he shared that he had the genetic condition and that he was under the care of Cincinnati Children’s genetic specialists.

Knowing the risk involved, Dr. Johnson consulted and collaborated with the genetics experts at Cincinnati Children’s, UC Health’s pediatric academic medicine partner in the region. He knew he could help Mike with his weight but wanted to ensure that Mike could tolerate the surgical process, including the pre-surgical preparation, which involves fasting with a liquid diet. The goal was to prevent muscle myopathy and kidney failure.

“One of our strengths at the UC Health Weight Loss Center is our ability to work with medically complex patients, such as Mike,”  Dr. Johnson states. “Part of this ability stems from the fact that our clinicians and staff work well as a team—and a weight loss program requires a team effort. We enjoy the challenge of treating people who have complex medical conditions—which is the benefit of an academic health system like UC Health.

“As part of our emphasis on patient-centered care, we consider each patient as the most important part of the team and play to his or her strengths and weaknesses, whether they be medical, dietary, physical and/or psychological,” he says.

While Mike worked closely with the dietetics staff at Cincinnati Children’s due to his rare condition, dietitians at the Weight Loss Center also regularly guide patients who have nutrition-related medical conditions.

“CPT II deficiency affects the way the body can use stored fat for energy,” says Haylee Hannah, MS, RDN, LD, CWOSM, senior clinical dietitian for the UC Health Weight Loss Center. “Careful nutrition planning is important to provide appropriate fuel for the body, while preventing low blood sugars and muscle breakdown. For conditions like these, it is critical that the bariatric surgery care team collaborate with the patient’s specialty care providers to tailor the best plan of care.”

Prepping for bariatric surgery includes following a high-protein liquid diet before surgery is performed. The Cincinnati Children’s team recommended a specialized beverage for Mike, using Medium-Chain Triglyceride (MCT) oil to fuel his body in consideration of his unique physical needs.

Mike came through this step with flying colors with the use of MCT oil mixed with a low-calorie sports beverage.

“This was a game-changer for me,” Mike says. “Because it is a good source to fuel muscles, it opened the door for me to be considered for bariatric surgery. Finding this concoction was almost like a miracle.”

“Mike is an ideal team player. He listened to our medical advice and did everything we asked of him and more,”  Dr. Johnson says. “He followed strict dietary guidelines as related to his CPT II disorder, he made and followed food journals, he increased his exercise level and he even allowed us to perform a trial run on the recommended post-op diet to make sure his kidneys would not shut down after surgery was completed. He has done really well, and while our expertise in offering weight loss surgery and services to medically complex conditions helped, much of the credit is due to him by the effort he has put forth in his own weight loss journey.”

Mike has the utmost respect for Dr. Johnson. “I have a deep sense of gratitude toward Dr. Johnson as he is extremely experienced performing gastric sleeve surgery. He has helped me to become a new, better and healthier person. He is a skilled surgeon and a very straightforward communicator. He explained in detail what happens before surgery, what happens after surgery, possible complications and side effects—he explained everything for me.”

Mike’s recovery went well with normal pain levels and no side effects.

Starting at 311 pounds, Mike has lost close to 100 pounds. He uses a food log, which is a helpful daily tool for success.

“Once you write it down, you become more responsible,” Mike says. “It enables you to develop healthy eating choices that are part of your routine.”

Today, Mike is in control—despite the genetic deficiency.

“The education I received prior to surgery by the Weight Loss Center staff and Cincinnati Children’s genetics experts has been extremely helpful,” he says. His daily nutrition focuses on a good breakfast with a natural, high-fiber whole-grain cereal with raisins for sweetness. He no longer eats potatoes but enjoys the skin of the potato. He focuses on smaller portions of meat, yogurt and steamed vegetables. He pops a couple of dates for a sweet snack.

Mike has worked hard to transform himself. “I feel more at ease, more relaxed and I have a new sense of confidence in myself. During my 40-year engineering career, I experienced much change due to new and advanced technologies. I’ve always welcomed the changes I experienced in business.”

His specialty was project management, and he considers weight loss is his special project.

“Now, I’m retired, and I can focus on changing me. The first thing I needed to do was to realize there was a life-long journey in front of me to lose weight,” Mike explains

His success is visible. “I had to completely replace my wardrobe. My waist is 10 inches smaller; my sport coat is four sizes smaller, and I now wear large shirt instead of a 2XL. All of this is very rewarding, and I know I can do more,” he says confidently.

For those who find themselves overweight and may feel challenged or hopeless, Mike’s advice is to try to mentally put yourself in a peaceful state to realize that bariatric surgery is a viable solution.

“Try to develop some level of calmness about the situation—a level of self-awareness,” he says. “Consider surgery because it offers a strong formula, so you do lose the weight. Also recognize that change is necessary and be willing to accept the change. When you take on the challenge, you yield a healthier person.”

Think You Are Too Old for Bariatric Surgery?

For those who are older and battling obesity, Mike offers encouragement. “People ages 65 and above are considered seniors,” he states, “but don’t let your age prevent you from having weight loss surgery.”

At age 68, Mikes believes that weight loss surgery is allowing him to extend his life.

“It is letting me live longer,” he says. “I feel that I have increased my life span by improving my overall level of healthiness.”