Getting Back Into Rhythm after Dual Transplant

Scott Taylor has dedicated his life to teaching young musicians how to become the best they can be. 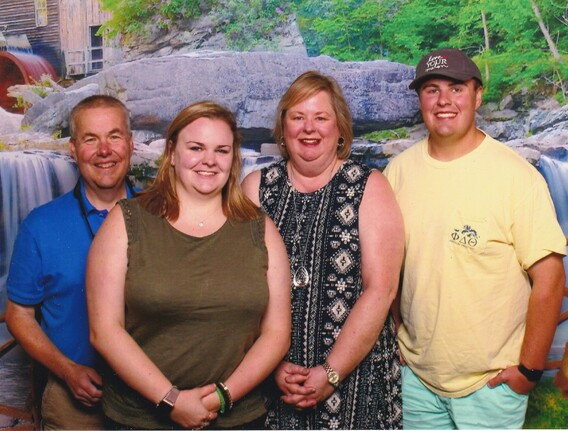 After going to Morehead State University on a music scholarship, he served as a high school and middle school band director for 30 years. Although he retired in 2016, he substitute teaches in the Newport and Boone County school systems in Northern Kentucky.

“I love substitute teaching, so I’m looking forward to getting back to that once I’m all healed from this,” Scott said.

While Scott has continued to remain dedicated to his students over the years, he’s had to deal with various health issues recently.

In 2009 while traveling to a high school football scrimmage, Scott and his young son were in a car accident. Although it didn’t seem necessary, he went to the emergency department to make sure he was OK. During his visit, a nurse noticed abnormal test results on his heart. Scott hadn’t previously observed issues with his heart, but his family history proved this wasn’t a total surprise.

Scott knew he’d have to have his heart monitored moving forward. The next few years would prove to be difficult. In 2014, he suffered a stroke and had a 3 millimeter blood clot pulled from the right side of his head. Later in the year, he had another blood clot, but this time, it was in his kidneys and spleen.

“I was down in my basement moving some things. It felt like someone was stabbing me with a knife,” Scott said. “Probably the worst pain I’ve ever felt in my life. It brought me to my knees.”

His family arranged transportation from his local hospital to University of Cincinnati Medical Center, where he was seen by Alexandru Costea, MD, cardiologist at the UC Heart, Lung and Vascular Institute and professor of internal medicine at the UC College of Medicine.

“Dr. Costea put in a pacemaker defibrillator, which later saved my life. UC has saved my life so many times,” Scott said.

His Journey to Dual Heart-Kidney Transplant

Scott acknowledged that he may need a heart transplant eventually. What he didn’t expect was that he would also need a kidney transplant. Earlier this year, Vlad Cotarlan, MD, heart failure subspecialist in the UC Heart, Lung and Vascular Institute and associate professor of internal medicine at the UC College of Medicine, recommended he be placed on the transplant list.

He was admitted to UC Medical Center, the only adult provider of heart transplants in Greater Cincinnati, in March and remained there until late-August. He discussed the prospects of having a dual transplant with David Feldman, MD, PhD, cardiologist in the UC Heart, Lung and Vascular Institute and professor of clinical medicine at the UC College of Medicine.

While this procedure could be beneficial, Scott worried about the difficulty of finding two good organs, a heart and a kidney. But after weighing his options with his family, he decided to pursue a dual transplant.

Louis B. Louis IV, MD, chief of cardiac surgery at UC Medical Center and associate professor of surgery in the Department of Surgery at the UC College of Medicine, informed Scott that they had a match for both organs. Dr. Louis knew this was the best option for him.

“His heart got so bad that we actually had to put in temporary support for him. I put him on a temporary artificial heart,” Dr. Louis said. “Then a week later, because that made him a higher status, we did the heart and kidney transplant.”

Dr. Louis performed Scott’s heart transplant, and Shimul Shah, MD, UC Health surgeon and the James and Catherine Orr Endowed Chair in Liver Transplantation, director of the Division of Transplantation and professor of surgery at the UC College of Medicine, performed his kidney transplant.

After the procedure, the first challenge Scott took on was walking up steps. After being unable to take any steps on the first day, he persevered, and a few days later was able to climb 15, three more than his goal of the 12 in his house.

Throughout his whole journey, Scott received the greatest support from his wife of 31 years, Kelli, and two children —Kelsey and Kyle. His son, Kyle, works at UC Medical Center on the same floor and in the same ward his father stayed in for five months.

Scott appreciates how his life has vastly improved thanks to the physicians and clinicians at UC Health, the only place he will ever go for future treatments.

“My whole family knows that if anything is wrong, we’re coming here,” Scott said. “I tell people, I don’t care what it is. You come over here.”

Moving forward, the road to recovery for Scott won’t be easy, but he will be able to return to the life he enjoys and the students he loves.

“He should expect to live a long and normal life, and one not in heart failure,” Dr. Louis said.