In a matter of hours, Greg West went from being a cancer patient, to being able to walk again. 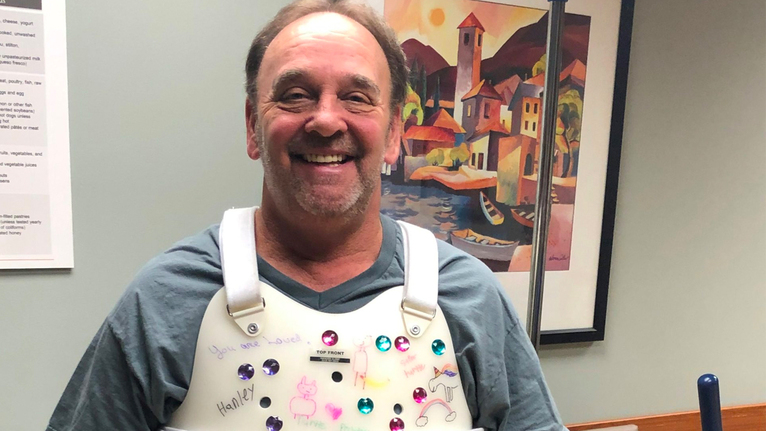 The 64-year-old from Grant County, Kentucky worked for General Motors for 15 years before starting his own landscaping business in Tampa, Florida. He recently returned to his hometown to enjoy retirement with his wife, Mary.

For the past three years, Greg struggled with lower back pain. His doctors were unable to explain the source of his pain. He went through multiple rounds of unsuccessful physical therapy and even had a laser procedure on the nerves in his back.

“The doctor told me the only thing left was to try surgery, but I wouldn’t do that until the pain got so bad that I couldn’t stand it,” Greg said.

In September 2019, the pain in Greg’s back became unbearable. He struggled to walk and even dislocated his elbow after falling in his house.

While being consulted for his elbow, the doctor noticed Greg’s inability to walk straight. He recommended he immediately have another MRI done to see what the problem could be. Unfortunately, the issue was too complex for them to do anything about.

Greg was then referred to the University of Cincinnati Gardner Neuroscience Institute, where he saw Rani Nasser, MD, UC Health neurosurgeon and assistant professor of neurosurgery at the UC College of Medicine.

As part of the region’s academic health system, the team at the UC Gardner Neuroscience Institute diagnoses some of the world’s most complex back, neck and spine conditions.

Dr. Nasser and his team, including Sandra Menkedick, NP, and Amy Perkins, NP, worked closely with Greg to find out what was the source of his severe back and neck pain. He had a disc in his neck that would need to be removed. Those symptoms were relieved as a result of a successful surgery.

Two months after his surgery, Greg had lost all ability in his lower extremities. He lost his ability to walk overnight. This development was unrelated to his first neck surgery. He once again traveled out of state to come to UC Health in order to seek care.

“I got ahold of Dr. Nasser, and he told me to come to the hospital right away and go right into the Emergency Department to be admitted,” Greg said. “I knew something was wrong based on what I told him.”

Greg arrived at UC Medical Center on a Friday evening. He had more testing, including MRIs and X-rays done on his spine, which revealed a spinal tumor.

The pain from Greg’s spine was the result of multiple myeloma, a form of cancer that begins in a type of white blood cell called a plasma cell. The disease can cause serious damage to the bones.

“Mr. West was presented with near paralysis as a result of a spinal column tumor with severe cord compression and collapse of his vertebral bodies,” Dr. Nasser said. “Because of the complexity and acuity of his condition, we took him to the operating room without delay to remove his spinal tumor and perform complex spinal reconstruction.”

Dr. Nasser and his team worked quickly to prepare Greg for surgery. Although a cancer diagnosis is frightening, Greg was at ease thanks to his care team.

“I knew Dr. Nasser was the right person to help me,” Greg said. “He said he could fix my back and remove the cancer.”

Dr. Nasser performed a surgery to remove the entire spinal tumor. The surgery was successful. Greg was able to return home after spending two weeks in the hospital. Days later, Greg was able to walk again.

“His resiliency is an inspiration to other patients and a testament to the comprehensive care that UC Health provides to our community and region,” Dr. Nasser said.

Thanks to the surgery, Greg is continuing to build on the progress he’s already made.

Although Greg is still going through radiation, he feels confident that his care team at UC Health will prevent the cancer from ever returning. He’s grateful for Dr. Nasser and his team for not only removing the tumor but also helping to restore his ability to walk. Dr. Nasser even came in to consult Greg on his day off.

“His whole staff is excellent. If I was going to trust anyone to save my life, it would be him,” Greg said.