John’s Journey Back from Lung Cancer

In June 2018, John Guttridge received news he thought might cost him his life. 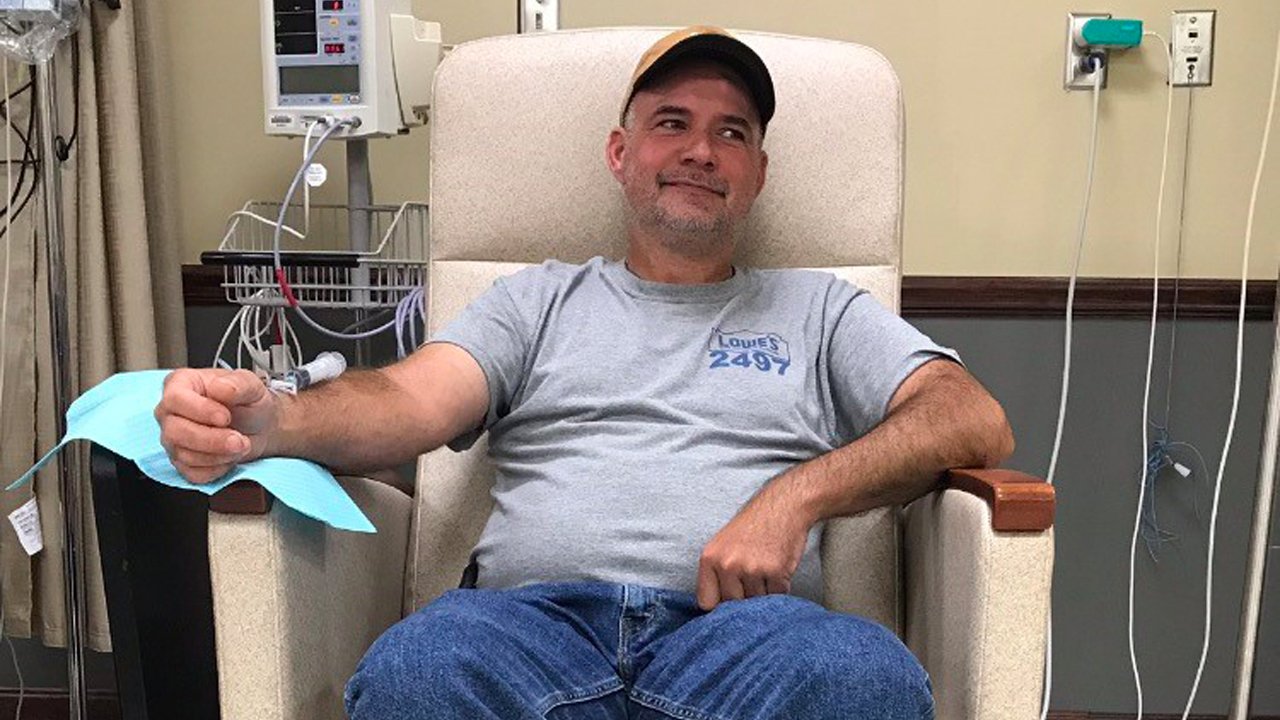 At 44 years old, he was diagnosed with lung cancer, the leading cause of cancer deaths in the United States for both men and women.

The Lewis County, Kentucky native had been dealing with a bad cough for weeks. He went to various doctors and urgent care centers to receive help, only to be told that it was pneumonia. He knew this wasn’t likely the problem. As a former emergency medical technician, he knew the symptoms of pneumonia. He didn’t have them.

John had two jobs. One is his current managerial role at Lowe’s, while the other was a mobile mechanic business he ran. He couldn’t continue to do both once he got sick.

After failing to receive a good explanation for his cough, he asked his doctor to do a chest X-ray. The X-ray revealed a 2-inch diameter spot on the lower lobe of his left lung. Prescribed antibiotics didn’t help.

One of John’s friends recommended he come to UC Health for a second opinion. Here, John saw Charles Kim, MD, UC Health lung disease subspecialist and assistant professor of medicine at the University of Cincinnati College of Medicine.

A biopsy showed that John had non-small cell lung cancer. John knew his life was now in question. His home state of Kentucky is the top-ranked state for lung cancer deaths in the U.S.

“You hear those words and you don’t know what to say,” John said. “You automatically think that this is the end.”

John was referred to the Lung Cancer Center at the UC Cancer Center, where he saw Sandra Starnes, MD, UC Health thoracic surgeon and professor of surgery and chief of the division of thoracic surgery at the UC College of Medicine. The team at UC Health is the most experienced in the region at screening, diagnosing and treating lung cancer, from simple to the most complex.

“Our team of lung cancer experts work closely together to develop an individualized treatment plan for each patient,” Dr. Starnes said.

What to Expect from Lung Cancer Treatment at UC Health

John had surgery on July 30, 2018 to remove his cancer. He was back to work seven weeks later. His experience at UC Health was nothing like he had ever experienced.

“I was so impressed with everyone,” John said.

To ensure every precaution was taken to prevent the cancer from returning, John’s care team recommended he participate in a clinical trial. As the region’s academic health system, UC Health offers clinical trials to help give patients every possible opportunity for a better life. John didn’t hesitate to participate.

“The doctors and nurses made it easy for me,” John said. “If it helped to save even one person’s life, it was worth it to me.”

John participated in the ALCHEMIST study, a lung cancer clinical trial. During this time, he was seen by John Morris, MD, medical oncologist and professor of medicine at the UC College of Medicine.

In all, John went through four rounds of chemotherapy and many more rounds of immunotherapy. The journey was grueling. At times, the only thing John could eat was Jell-O and bananas. He still has a ways to go before full recovery, but he feels confident that his lung cancer will not return in the future.

John credits the support he received throughout all of his treatments from his girlfriend, Tina. He also is grateful for his UC Health team who did every possible thing to save his life.

“I wouldn’t recommend anyone go anywhere but UC Health,” John said. “I’ll never go anywhere else for treatments in the future.”

Although he still feels tired at times, John knows his life will drastically improve in the coming months. He will be able to continue to work and live a long, happy life.