On Wednesday, Sept. 18, 2019, 46-year-old Coy Tite went fishing with his brother near his home in Greenfield, OH. Upon parking the boat, Coy’s brother tripped and fell onto the dock. 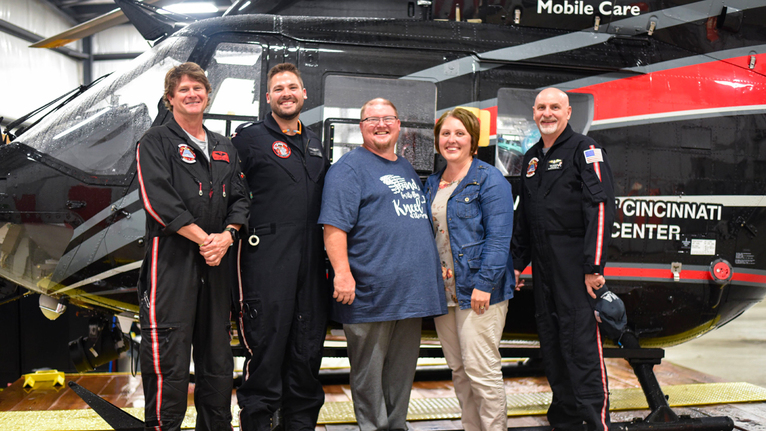 The fall didn’t seem too worrisome but because Coy knew his brother just recently had open-heart surgery, he wanted to make sure he was OK.

Thinking the boat was in much shallower water, Coy walked off the front of the boat to help.

That was the last thing Coy remembers.

Coy fell and hit his head in just deep enough water for him to aspirate, or ingest water through his airway. Coy’s brother knew he needed to call for help but didn’t have the cell phone service required to do so.

Not minutes later did another fishing boat appear who did have service and immediately called 911.

Paint Creek Fire Department transported Coy to a local hospital, where shortly after, clinicians there called UC Health Air Care seeing the severity of his case. UC Health Air Care flew from Mt. Orab to Greenfield, which took just about 20 minutes via helicopter — a normally hour-long drive via ground.

Together with Paint Creek Fire Department and clinicians at the local hospital, Joe Hughes, UC Health flight nurse, and Rick Jamie, UC Health certified nurse practitioner, worked to stabilize Coy enough to get him on a flight to University of Cincinnati Medical Center.

“The best way we can take care of patients is by being a team,” Joe said, in reference to emergency care with both UC Health Air Care & Mobile Care, EMS entities and referring hospitals.

It took about an hour and 30 minutes for Coy’s oxygen saturation levels — the amount of oxygen in his blood — to return high enough for him to board the helicopter.

Once stable, Metro Aviation pilot Dan Spencer flew the flight crew and Coy to UC Medical Center. It took 17 minutes after landing at Greater Cincinnati’s only adult Level I trauma center that Coy went on ECMO — a machine that replaces the function of both the heart and lungs for severe, at risk patients. ECMO allows for oxygen and carbon dioxide to exchange in the blood while allowing the lungs to recover, which in Coy’s case was the result of inflammation from aspirating lake water.

The team cared for Coy in his darkest hours, explaining to Coy’s wife, Heidi, that he would most likely be on ECMO for at least a week.

“As the region’s academic health system, we were able to provide advanced care to Coy with an entire team of experts in a matter of minutes,” said Dr. Louis. “We’re helping our patients see another hour, another day, a new lifetime.”

Recalling the experience with the UC Medical Center clinical staff, Heidi said, “They were always one step ahead in caring for him. They couldn’t have done anything differently.”

Just a month after his accident, Coy and Heidi went to meet the UC Health Air Care team who retrieved him in September and to see the aircraft that he doesn’t remember flying in.

“I’m here because of you guys,” Coy said to his UC Health Air Care team.