For 40-year-old Shanda Batchelor, her dad, Kenneth Ray, is her everything. She even named her daughter, Kenna Rae, after him.

That’s why it was especially worrisome when he fell ill with COVID-19 in April 2020.

At first, 64-year-old Kenneth Batchelor really didn’t think much of his worsening cold symptoms, but Shanda — a UC Health nurse — knew something wasn’t quite right when he hit a 103-degree fever. The most concerning sign was when he told Shanda his dinner had no flavor — as loss of taste is a hallmark side effect of COVID-19.

Shanda monitored his symptoms from what she could tell over the phone. After hearing of his worsening symptoms, Shanda made an appointment for him to see his primary care physician, Chad Coe, MD, assistant professor of medicine for the University of Cincinnati College of Medicine and a UC Health primary care physician.

Dr. Coe said, “He was actually sent to the hospital by my partner, Dr. Hudson. The providers were taking turns seeing patients in person vs doing virtual visits, and Dr. Hudson was the doctor who was at the office that day. She elected to see Kenneth in his car in the parking lot (with proper PPE of course) as there was concerns he was worse off than what his symptoms suggested.”

Because of his known 103 degree fever and other symptoms, Casey Hudson, DO, adjunct instructor for the UC College of Medicine and UC Health primary care physician, dressed in full personal protective equipment (PPE). She met Kenneth and Shanda in the UC Health Physicians Office–Midtown parking lot where she evaluated him.

It didn’t take long for Dr. Hudson to discover Kenneth’s oxygen saturation levels were dangerously low and a visit to UC Medical Center was imperative.

More than once, Shanda has recommended UC Medical Center for her family’s care, because she trusts the system’s capabilities and expertise over local hospitals that may be closer to home.

Her dad Kenneth also has a special relationship with the UC Medical Center NICU. On more than one occasion, Shanda signed her dad up to be Santa Claus and visit the babies and their families in early December. To make the event even more exciting, Santa was flown in via helicopter by UC Health Air Care. 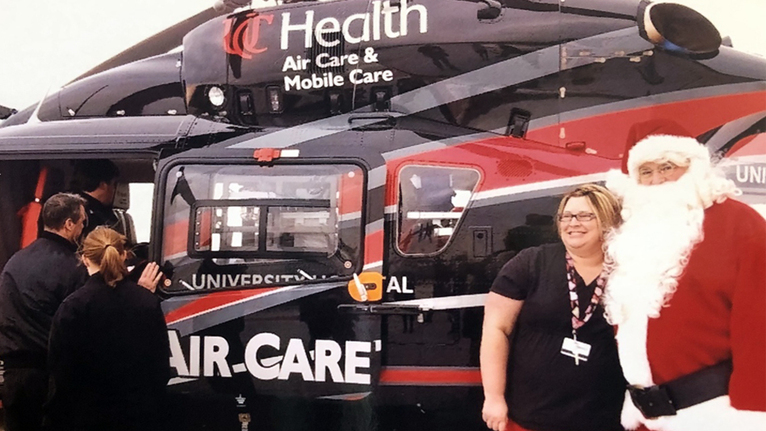 Shanda with her father, Kenneth, dressed up as Santa Claus to visit the UCMC NICU.

Shanda’s colleagues in the NICU have always referred to Kenneth as “Daddy Batchelor” because to them, he’s their dad, too. Kenneth has helped out his daughter’s colleagues numerous times, even going as far as installing a ceiling fan in one of their apartments.

Kenneth arrived to the UC Medical Center Emergency Department on April 21, 2020, and his providers there referred to him as a “happy hypoxemic,” astounded by what Kenneth was still able to do with an 83-oxygen saturation level. For reference, a healthy level sits somewhere between 95-100.

Not 24 hours later, the “happy hypoxemic” Kenneth moved to the seventh floor Medical Intensive Care Unit (MICU) where he stayed for roughly two weeks. He was placed on 6 liters of oxygen to keep him stable.

Up until this point, most patients at UC Medical Center who required more than 6 liters of oxygen had to be placed on a ventilator. At the time in late April, studies were indicating that if intubation and ventilator use could be avoided, it might ultimately be better for the patient. Kenneth’s care team in the MICU bumped him up to 10 liters of oxygen and was able to safely and successfully avoid intubation and ventilator use.

It was beyond challenging for the two and half weeks Shanda’s dad was in the same hospital she worked. Although she was just floors below where her dad was, she had to follow the same visitor policy as all other family members, which meant she could not see him in person. Luckily, Kenneth’s care team kept Shanda constantly in the loop, and made sure that when they explained his care to Kenneth, Shanda was there on speakerphone. Some phone calls were harder than others and the scariest phone call she endured was the day her dad had trouble clearing his airway.

“There was one day that dad had gotten a terrible nose bleed, because he had the bleeding issues that are also a side effect of COVID, and they couldn’t clear his airway. So they flipped him over on his stomach, and I could hear it all going on. It was about half an hour total and I just I kept thinking, they are intubating him, they are intubating him,” Shanda recalled.

After 30 minutes, and with tears in her eyes, she heard Kenneth’s resident physician say, “Ms. Batchelor, are you still there?” Shanda did not hang up because it was the one line into her dad’s room. Luckily for Kenneth – and for Shanda – his care team was able to avoid intubation and his nose bleed eventually subsided.

Over the next couple of days, some of Kenneth’s more serious symptoms subsided as well, but certainly not all of them.

Dr. Coe said, “I was updated frequently by his inpatient team about his condition and the plan for his care upon discharge. I remember looking at his CT scan imaging and the amount of damage that was done to his lungs by COVID-19 was striking and very concerning. Kenneth was discharged on 6 liters per minute of home oxygen — significant for anyone, but especially for someone who was not on any home oxygen before he became ill.  He was also diagnosed with a deep vein thrombosis (DVT), also something that is seen frequently with COVID-19.”

“They kept telling me how bad his lungs looked,” Shanda recounted.

With frequent communication between Shanda and Dr. Coe, they decided together they would be able to ween Kenneth off the oxygen over time and he’d be able to safely recover at home.

Kenneth was discharged from UC Medical Center on May 5, 2020, and people from near and far were ready to celebrate his homecoming. 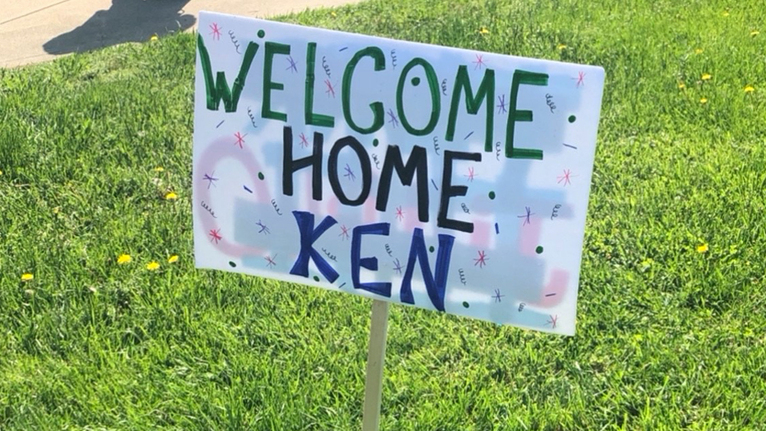 “I live on a side street and there is really no parking. As we rounded the corner, I saw my niece and nephews, a friend of my daughter’s, and the more cars we passed, the more people I recognized. There were signs on my garage door, out in my front yard,” recalled Kenneth. “Shanda likes to embarrass me like that,” he said chuckling. 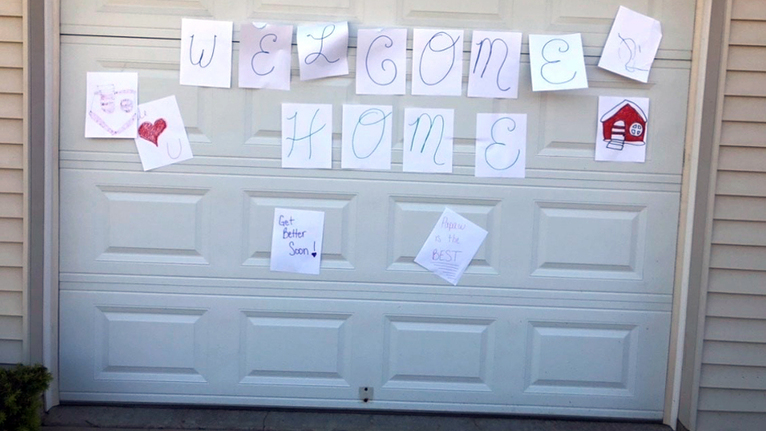 From the beginning of his hospitalization, people who knew Kenneth wanted updates about his health. Even members of his high school class reached out to Shanda to ask how he was doing. With his discharge, numerous people even asked Shanda how they could personally help during his road to recovery.

“I started an online meal-train sign up since so many people were asking to help. I think it only took seven minutes for the entire thing to fill up — a meal a day over three weeks,” said Shanda.

With help from Dr. Coe and his daughter, Kenneth is almost completely off his oxygen. Although he’s still not back to work, he is feeling more and more like himself again.

Because his recovery is in good shape, he and his daughter are now actively trying to spread the word about the seriousness of COVID-19.

“We can’t relax yet,” Kenneth warns of people returning to society like normal. “Every little bit that people can do is going to help keep it down.”

And his primary care physician Dr. Coe agrees. He says, “As this drags on, it is harder to stay completely at home and completely isolated from everyone. That’s not what the medical community is asking of people.  We are asking them to assess each activity for how safe it is, and if it is possibly unsafe to either not participate or really limit their participation. And of course, to wear a mask to protect themselves and others.”

Kenneth is grateful for the care he received at UC Health, for his attentive providers and for the support he received along the way, from people near and far. Above all else, he’s most grateful for his daughter, Shanda, who made sure COVID-19 wasn’t his last chapter to tell.