Unrelenting pain wracked Dan Null’s abdomen and lower back one evening in March 2017. 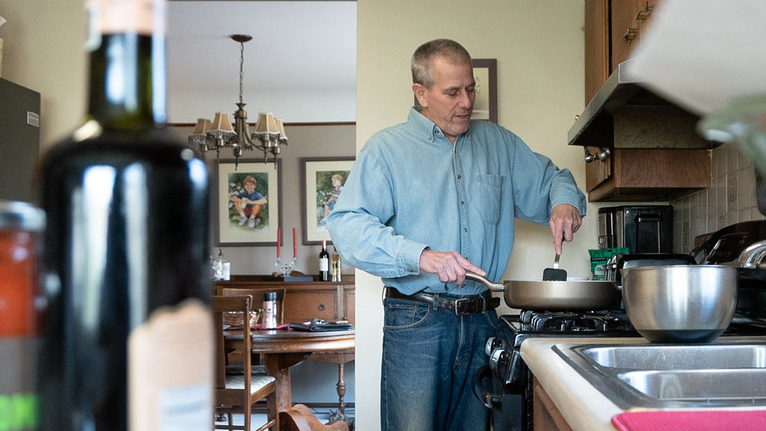 Since his wife recently had knee surgery, their son drove Dan to West Chester Hospital’s Emergency Department. Doctors ordered an MRI, and within 24 hours of being admitted, Dan received his diagnosis — pancreatic cancer.

“It was like everything happened in the blink of an eye — they found a mass on the head of my pancreas and immediately set me up with a team of pancreatic cancer specialists,” said Dan.

That team of specialists includes Syed Ahmad, MD, UC Health director of surgical oncology, director of the Pancreatic Disease Center and co-director of the University of Cincinnati Cancer Center, and Davendra Sohal, MD, MPH, UC Health hematology oncologist at West Chester Hospital and associate professor of medicine at the UC College of Medicine.

“Within one month, they’d mapped out their strategy for my treatment,” Dan said. Diagnosed March 20, 2017, he underwent about five months of chemotherapy treatments, followed by two weeks of radiation. Doctors gave him a brief break from treatment for his body to recoup before undergoing surgery.

Dr. Ahmad performed Dan’s eight-hour pancreaticoduodenectomy, a complex surgical technique referred to as the Whipple procedure, named for Dr. Allen Whipple, an American surgeon who created the surgery in 1935. Simply put, it is a resection of the pancreas.

Dan cheerfully describes his recovery as a “piece of cake.”

“I thought it would be difficult, but I came through surgery without a problem—I’ve had teeth pulled that have caused me more pain.”

The only snag occurred during Dan’s recovery—he wasn’t able to eat. “I had zero interest in food, even with medication to stimulate my appetite,” he said. “I had to force myself to eat, and I lost so much weight that I went from about 165 pounds down to 120.”

Doctors discovered an abscess on the surgical site, which contributed to Dan’s inability to eat. The abscess was surgically fixed in early January 2018, and Dan said everything after that was smooth sailing.

Nearly three years in remission, Dan now says he feels better now than he did before his diagnosis. He receives scans and routine bloodwork every six months. “I’ve been so fortunate, and I can’t thank everyone at UC Health and West Chester Hospital enough,” Dan said. “I felt comfortable and confident with every decision the doctors made, and I thank them for saving my life.”

What is the Whipple Procedure?

The Whipple, technically called a pancreaticoduodenectomy, is a complex surgical procedure used to resect the pancreas. The head of the pancreas, the first part of the small intestine (duodenum), the gallbladder and the bile duct are removed. The surgeon then reconnects the remaining organs to allow normal digestion. After surgery, patients are carefully monitored in the surgical intensive unit for 24–48 hours. The estimated hospital stay is 7–10 days and estimated postoperative recovery is 6–8 weeks. Patients with pancreatic cancer and patients with benign disorders such as chronic pancreatitis and pancreatic cysts who require surgery are primary candidates for the procedure.

The future has become much brighter for people diagnosed with pancreatic cancer, thanks in part to research studies conducted at UC Health. Dr. Sohal and Dr. Ahmad recently completed their latest collaboration: a groundbreaking clinical trial of 150 patients with pancreatic cancer. “We focused on treating pancreatic cancer in a new way by having patients undergo chemotherapy upfront before surgery,” said Dr. Sohal. “The traditional method has always been to go to the operating room first. Our goal is to have a clinical trial available for every patient coming through our doors. We have clinical trials that span a wide spectrum, focusing on chemotherapy drugs, radiotherapy and genomic sequencing (its impact on surgery). We cover many areas of pancreatic cancer, and we aim to provide better, targeted therapies.”