It has now been a couple of months since 22-year-old Hunter Goodpaster returned to his home in West Carrolton, just outside of Dayton, Ohio, after being discharged from UC Medical Center. He spent the last three months of 2021 battling for his life against COVID-19 pneumonia.

Hunter continues his recovery at home with his longtime girlfriend and now fiancé, Payton Chaffin. On Feb. 18, he finally had the tracheostomy tube removed that had been part of his treatment. He has been focusing on getting his voice back along with his muscle function, which had been lost after spending such a long period of time at the hospital.

Both Hunter and Payton ended up getting COVID-19, but Hunter’s case became much worse, becoming life-threatening.

The Beginning: Catching the COVID-19 Virus

In Sept. 2021, Hunter and Payton were preparing to get their COVID-19 vaccines so they could safely attend a concert. Days before their scheduled appointments, Payton tested positive for the virus, which she says may have resulted from exposure at her job as a pre-K teacher. A few days later, Hunter, who works for Clearcreek Township’s Parks and Roads Department, started to not feel well, too.

Hunter went and saw his doctor to see if he potentially had COVID-19, himself. He tested negative, but his doctor urged him to take any necessary precautions to stay safe, as he could always test positive later on once symptoms set in.

Payton experienced mild symptoms and quickly recovered, but Hunter struggled with a high fever and bad cough. He went to his local emergency room and tested positive. Doctors gave him IV fluids for dehydration. He didn’t have pneumonia initially, so he was treated just for COVID-19, was given medication and went home soon after.

As the days went on, Hunter’s condition did not improve—his cough worsened, and he struggled to sleep. Following a trip to a local urgent care facility, Hunter received a pulse oximeter so he could monitor his oxygen levels, which continued to drop.

“I was terrified, but I wanted to try to assure everyone that things would be OK,” Hunter said.

He was finally diagnosed with COVID-19 pneumonia, a serious complication that impacts the lungs and causes breathing issues, on Oct. 6, 2021. Pneumonia can result following COVID-19 symptoms.

“It's unclear why some people seem to get such severe symptoms after COVID-19 infection while others remain asymptomatic,” explained Joseph Sun, MD, UC Health anesthesiologist, critical care intensivist and assistant professor of clinical at the University of Cincinnati College of Medicine. “It certainly is atypical for someone as young as Hunter to have become so sick, but it does happen. Almost all of the patients we see for ECMO have been unvaccinated.”

Hunter spent 11 days at a community hospital near Dayton, only to have his condition worsen even further. His lung collapsed, causing him to need dual chest tubes. He went onto a ventilator soon after, and was then moved to the intensive care unit for additional one-on-one care. 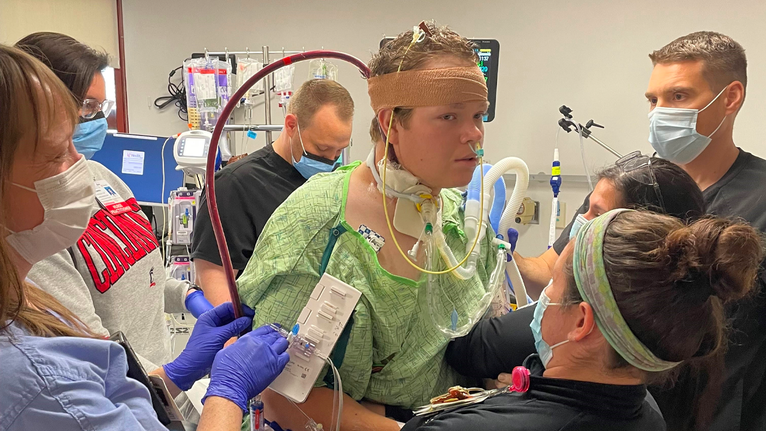 Doctors told Hunter that he needed extracorporeal membrane oxygenation (ECMO)—something the hospital did not offer. ECMO gives support to the heart and lungs when they are unable to function on their own.

“It was crazy because it happened so fast. I questioned why things were so different for him since I recovered relatively quickly,” Payton explained. Hunter’s parents were in disbelief, but his entire family rallied around him and would not give up.

Other regional health systems were unable to accept Hunter for ECMO care, however, one hospital did—UC Medical Center.

Due to weather and possible complications with his condition, Hunter could not be transported via helicopter. Instead, he was transported by EMS to Cincinnati, where he soon after started ECMO. His UC Health care team had a plan and knew exactly what to do. The team has extensive experience caring for critically ill patients who need advanced life-support care.

Hunter was in poor condition when he first arrived at UC Medical Center. In addition to being intubated and with chest tubes, he had evidence of subcutaneous emphysema, or the presence of air in his tissues/skin. This can be caused by small leaks in the lungs and airway due to high pressures on the ventilator. Things looked rather bleak.

“We emphasized to Hunter's family that this would most likely be an extended stay. ECMO itself, while extremely useful, is a support device. It does not heal or cure illness, but it does buy time for the body and lungs to rest,” Dr. Sun said. “There would be times where we would have to take things hour by hour, day by day. There were many faces involved in his care, but everyone was an integral part of his care team.” 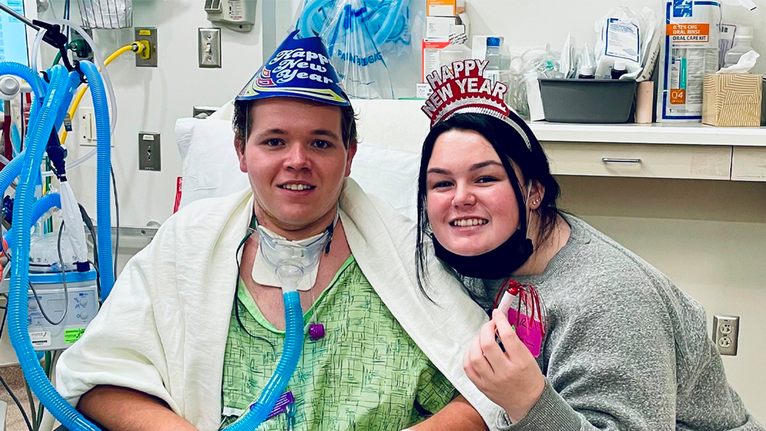 Over the next few months, UC Health’s Cardiovascular Intensive Care Unit (CVICU) team worked to get Hunter well enough to get back home to his fiancé and family. He remained on ECMO, oxygen and a ventilator.

Hunter’s family visited daily. His parents never left his side, relying on prayer and encouragement to keep him fighting. They remained in Cincinnati until his ultimate discharge and met with his care team daily. Due visitor restrictions from COVID-19, his family could not enter his CVICU room, and had to take turns to see him. Nurses would hold up the phone.  They spent multiple holidays with him there while he continued treatment. Days turned to weeks, and weeks turned into months, but the family vigil never stopped.

There were times when it seemed that Hunter would be well enough to go home, but then would experience setbacks. This was difficult for him and his family and took a major emotional toll. But they all remained positive and didn’t give up.

Finally, early in Jan. 2022, Hunter recovered enough to be removed from life support. He had to use his tracheostomy tube to communicate and had to relearn to walk on his own. His post-hospital treatment will go on until he fully recovers, which he is moving toward each day. He recently had his trach removed, got his voice back and is nearing the end of physical therapy.

As he reflects back on the final months of 2021, Hunter still can’t believe what happened. After never spending a day in the hospital, the young, healthy man had to fight for his life— and he almost lost that battle. He still doesn’t remember anything from when he first went into the ICU from  early Oct. to Thanksgiving 2021.

“The experience was exhausting, especially as the months went by and he didn’t improve,” said Payton, who went back and forth a lot since she had to work back in Dayton. Mentally, she was being so many different directions. No matter how hard things got, she wanted to make sure she was by Hunter’s side as much as she could be, especially during the most difficult moments. The couple has had many great days together, but this hard time only made their bond stronger as a couple.

Hunter remains thankful for his support system throughout the long, hard journey. He’s grateful for UC Health’s willingness to take a chance on treating him when other hospitals could, and would, not.

“I honestly couldn’t have asked for a better group of people around me, including Payton, my family and hospital care team,” he said. 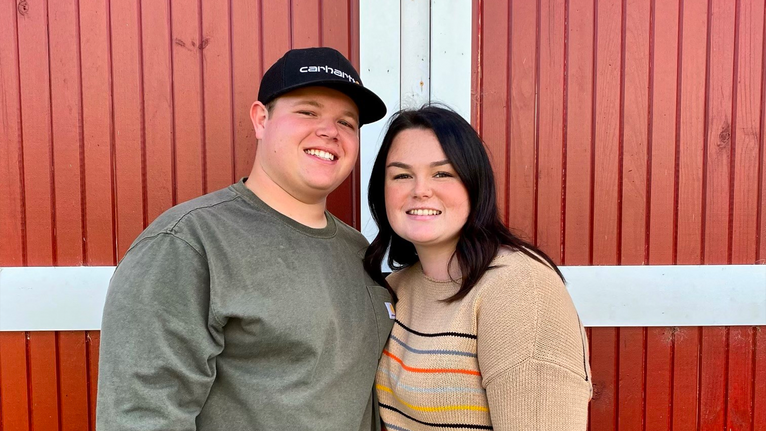 Both Hunter and Payton wanted to acknowledge not only the care from Dr. Sun, but also other members of the team, including Chet Backman, RN, Josh Arrowood, RT, and Jason Kirchoff, ECMO specialist. Each of these experienced caregivers in the CVICU treated Hunter and his family with compassion during the worst days.

“Every single person that works in the CVICU, from top to bottom, is an integral part of the team that cares for each patient,” said Dr. Sun.

Hunter’s mother, Tammy, said the team always encouraged him and the rest of the family, even when things looked bleak.

“There will never be enough appreciation or words to express the sincere gratitude I have for the staff at UC Health,” Tammy said. “I will be forever grateful for the care he received.”

Once he was well enough, Hunter went and finally received his COVID-19 vaccine. To this day, both he and Payton plead for anyone who has not been vaccinated to get the shot.

“Getting the vaccine is a chance to not have to go through this again. We want to keep each other safe and help prevent others from going through what we went through,” Payton explained.

Hunter is excited to get back to fishing, traveling and spending time with Payton. He proposed on March 5 and they are excited to start to planning their wedding.