Two Generations of Brooks’ at the NICU

In September 2019, the Neonatal Intensive Care Unit, or NICU, at University of Cincinnati Medical Center hosted its biennial reunion. 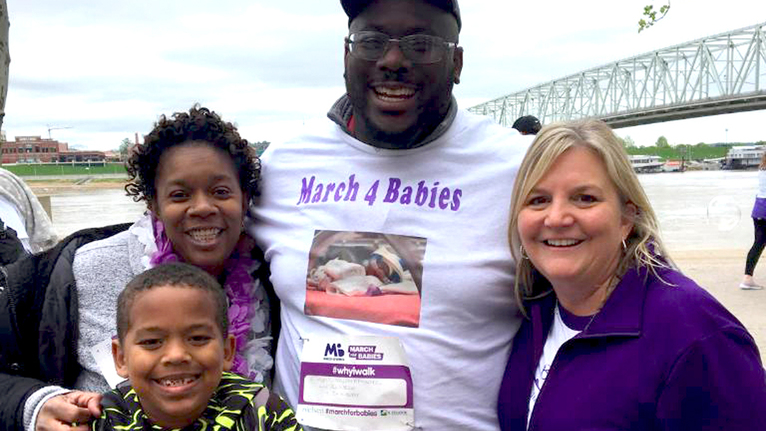 The reunion allowed parents and their NICU graduates to reunite with nurses and staff from the unit.

Nearly 200 families returned to the UC Medical Center courtyard on this sunny Saturday afternoon to celebrate their graduates’ success.

One family in attendance for the reunion was the Brooks family from nearby Avondale. Deon Brooks and his wife, Shakiyla, brought their four children—Kaleb Burt, Kaeleon, Kenyon and Kyndall.

“It was amazing to see the smiles on the kids’ faces, all of whom were doing well and were having a good time,” Deon said.

The couple’s youngest child and only daughter, Kyndall, recently graduated from the unit. She was born two months early on Jan. 30. Deon said he can’t thank the team at the NICU enough for their work to save Kyndall’s life.

“Not just the nurses, but also those making sure everything is cleaned up and making sure you are safe,” Deon said. “Every day, no matter what you’re going through, they greet you with a smile.”

One of those nurses from the unit was Kelly Tiernan, RN, who helped care for Kyndall while she was there. However, this was not the first time that the Brooks family had seen her.

Deon is also a graduate of the NICU. He was born a month and a half early, the day after Christmas in 1990. The nurse who cared for him while he was in the unit is the same nurse who watched over his daughter—Kelly.

It was Deon’s mother who recognized Kelly while she was caring for little Kyndall.

“When she saw Kelly in the NICU, she started crying,” Deon said. “Kelly has had a role in not just one generation but two generations of my family. She’s part of the reason why my bloodline with live on.”

Deon is now 28 years old and has a successful career driving trucks and coaching youth football. He is also a husband and father to four healthy children.

Kelly has been a NICU nurse at UC Medical Center since 1989. She’s had the opportunity to touch the lives of many preemies, including two in the Brooks family.

“It’s just so rewarding and heartwarming and brings everything full circle to see him and that he had a child here, and that he grew up to be healthy and successful,” Kelly said.

Over the years working 12 hour shifts that include many weekends and holidays, Kelly has touched the lives of many families and their babies. These families have shown their appreciation for her in different ways. One former patient invited her to their high school graduation, and a set of twins’ family sent her flowers on their first birthday.

“It makes coming to work every day worth it. You can see your outcomes. I can’t explain it,” Kelly said. “It’s just heartwarming to see the product of what you do every day.”

Deon and Shakiyla had a chance to reunite with Kelly at the March of Dimes Walk in addition to the NICU Reunion.

The Brooks family is so appreciative for not only Kelly, but the entire staff at UC Medical Center for making them feel calm, safe and assured. They know that if anything happens in the future, UC Health will be the place they will go.

“We know that the best care in the state is just minutes away from us,” Deon said.

Kyndall, or “princess” as her parents often call her, is nearing nine months old, and is healthy and happy. Meanwhile, Kelly remains dedicated to her colleagues and the families she serves here in the unit.