Soccer has been a part of almost every chapter of Jason Chamber’s life, from his Miami University intramural days to the Cincinnati Saints (now known as the Dayton Dynamo). 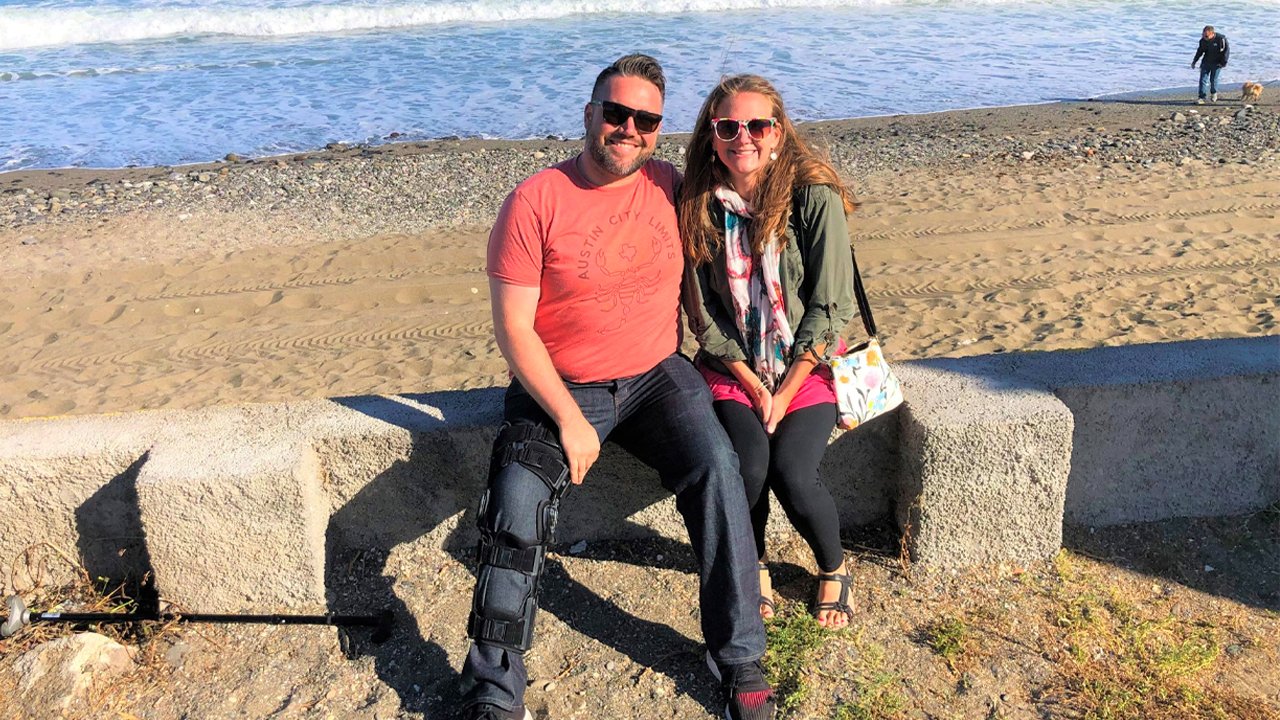 It was even during an adult coed league game where he met his match. An opponent scored a goal on him. With his pride slightly hurt, he was intrigued enough to make her his wife of now five years and mother of their two children.

Jason’s years of experience as a goalkeeper brought him many proud memories but unfortunately also increased his likelihood of severe joint damage. There wasn’t one specific incident that injured Jason’s knee. But it was the recurring impact with turf and numerous knee-on-knee collisions that led to the painful wear-and-tear of his knee cartilage and, ultimately, into the operating room.

After an unsuccessful knee surgery at a community hospital, Jason found himself in the same amount of pain before surgery. Not only that, but his overall health was declining due to his unimproved physical state.

Jason has worked at the University of Cincinnati for eight years, the last five spent in the Department of International Admissions. Visibly in discomfort, several of his colleagues encouraged him to see fellowship-trained Brian Grawe, MD, UC Health orthopaedics and sports medicine surgeon and associate professor in the Department of Orthopaedic Surgery at the UC College of Medicine.

Dr. Grawe found Jason’s knee in the same condition as someone who had been in a traumatic car accident.

“Jason had an osteochondral lesion of the knee. Many people can develop this due to genetics, one specific injury or years of wear-and-tear,” Dr. Grawe said. “For Jason, he had it as a result of his previous surgery” — and the mismatched bone and tissue plugs previously placed into Jason’s knee two years prior had failed Dr. Grawe was surprised that those types of plugs were used because they are proven to be unsuccessful.

Dr. Grawe discussed Jason’s options with him—from a traditional joint replacement to a new, alternative joint preservation technique called a cartilage transplant. In this kind of transplant, bone and cartilage from a deceased donor is precisely shaped to replace diseased cartilage and to cushion the exposed bone ends of the patient, allowing the joint to properly glide.

“It has to be the right surgery, at the right time, for the right patient,” Dr. Grawe said. “Plus, we have the expertise here at UC Health to pull off these leading-edge procedures with success. This is truly one of those academic differences.”

Jason said: “As soon as I met with him, I knew I wouldn’t go anywhere else. Dr. Grawe took the time to explain why the previous procedure failed and further clarified why cartilage transplant surgery would work for my knee.”

As with any transplant procedure, there is a waiting period for a donor to become available. For a donor to be considered a match for Jason, the person would need to be within ten years of his age.

“He also had to receive a preoperative MRI to make sure the donor tissue had similar geometric characteristics, otherwise known as a radius of curvature match,” said Dr. Grawe.

But even if a match was identified, Jason would have to lose the weight he had gained after his first knee surgery in order to be considered for this type of procedure.

“Surgery was a turning point in my life overall. I was playing soccer three to four nights a week, and it was taking a toll on my body,” Jason said.

Jason’s motivation to be active was no longer to play competitive soccer again but, rather, to be able to chase his toddler.

He began pre-surgery physical therapy, started eating healthier and ultimately lost 50 pounds in three months. It was shortly thereafter, and on his birthday, that he got “the call” every transplant recipient waits for.

In March 2019, a cartilage donor was available, and he had to schedule the surgery within a matter of days before the tissue became unusable.

Before his surgery at UC Health, Jason struggled to go down the stairs, would always use the elevator and couldn’t bend down to pick up his son.

“There’s still some stiffness but my muscles are strengthening. I can now do all of these things at a greater mobility,” Jason said. “It’s a process, but 1,000 times better. I can’t recommend them highly enough.

“Life happens, and UC Health is there for you.”