UC Health First in Region to Use Innovative Hearing Implant

The innovative device completely restored hearing for 71-year-old Judy Landes after years of earaches and irritation. 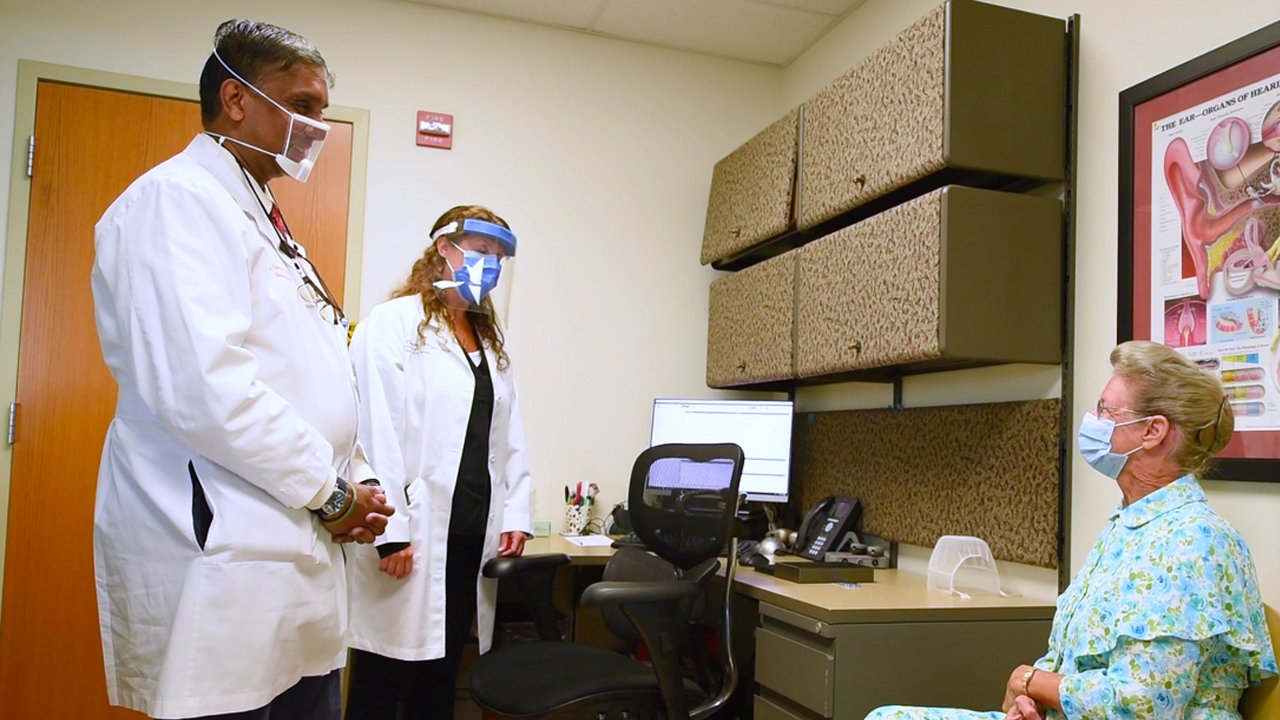 For many years, Judy Landes struggled with ear pain and aches. The 71-year old from the Dayton, Ohio area spent most of her childhood, teenage and adult years dealing with these issues without any long-term solutions.

Judy has a history of seasonal allergies and has suffered from chronic earaches for many years. In her 20s, she was tested and treated for allergies. Her eardrum ruptured numerous times from multiple infections.

As a teenager, Judy’s parents began to notice that she had trouble hearing from time to time. However, she continued her life without any major change or decline in her condition. When Judy was 36, her ear issues returned often and worse than when she was younger. She developed severe symptoms, including itching and irritation predominantly in her left ear. Her primary care doctor diagnosed her with chronic sinusitis, a condition that causes inflammation in the sinuses.

Judy’s doctor also found a perforated eardrum and infection in the mastoid bone, which is located just behind the ear. She had surgery to remove the infected part of the bone and had her eardrum replaced.

Although the surgery was effective, it was not permanent. Eighteen years later, Judy had another eardrum replacement surgery. Then, another just six months later. This seemed like it would be a continuous cycle for Judy —surgeries that would only improve her pain and infections temporarily.

“Early in the 2000s, I started wearing hearing aids, figuring that I would have to for the rest of my life,” Judy said.

By 2019, Judy’s severe itching and irritation in her left ear had returned. She visited her audiologist in Dayton and had an MRI in November 2019, which revealed a possible tumor in her left ear.

A Second Opinion at UC Health

Judy’s audiologist recommended that she receive a second opinion on her condition from Ravi N. Samy, MD, neurotology/skull-base surgeon at the University of Cincinnati Gardner Neuroscience Institute and professor in the Department of Otolaryngology at the UC College of Medicine.

“The UC Health Audiology and Neurotology team is dedicated to being at the forefront of technology by providing world-class care through science and education, and by providing the best possible outcomes for each patient,” Dr. Samy said.

Thankfully, more testing revealed that Judy did not have a tumor in her ear, but she did have scar tissue resulting from past procedures.

Dr. Samy recommended that Judy have surgery to remove the scar tissue and repair her mastoid bone. The surgery would help her aches and pains, but it would likely result in hearing loss from damage to nerve cells. To help fully restore her hearing, Dr. Samy recommended Judy then have a bone conduction device surgically implanted.

Bonebridge is an implant in the bone behind the ear that is placed underneath the skin. When activated, the device restores hearing to patients who partially or fully lost it previously. Bonebridge is also the world’s first active bone conduction implant system, which sends sounds directly to the inner ear by way of vibration, bypassing the outer and middle ear. This system can be life-changing for people who do not have a functional or intact hearing system and who are not able to wear traditional hearing aids.

“Bonebridge opens the world of hearing to individuals who have conductive, mixed-hearing loss or single-sided deafness, allowing them to be a part of the hearing world,” Theresa Hammer, AuD, a UC Health audiologist stated.

Judy was nervous for the initial surgery because of how it might diminish her hearing ability. Even though the implant would restore it, she still had doubts. But she moved forward and trusted Dr. Samy, who she heard is the best at what he does.

In December 2019, she made the roughly one hour drive down to Cincinnati to have the scar tissue in her ear removed. Dr. Samy then reconstructed her ear canal, eardrum and mastoid bone. The surgery was successful, but it did not improve Judy’s hearing ability. Due to the COVID-19 pandemic and while she recovered from her first surgery, Judy waited six months before having the bone conduction device implanted. As the procedure date neared, she became excited.

“I was like a kid on Christmas Day,” Judy said. “I did not want to go the rest of my life without hearing on my left side.”

In June 2020, Judy had the Bonebridge device implanted; then a few weeks later, her care team activated the device, which fully restored her hearing.

UC Health is the first health system in Greater Cincinnati to perform a Bonebridge implant, which may allow patients more hope for their complex hearing issues.

With her hearing fully restored, Judy has been able to return to her life without any complications. Recently, she went with her family to Lake Cumberland, a longstanding vacation tradition.

“We expect Mrs. Landes to do very well with the Bonebridge, as the device will give her access to natural sound while bypassing the damaged parts of her ear,” Drs. Hammer and Samy explained.

As time goes on, Judy will continue to enjoy her life, which includes her husband, Stan, three children, 10 grandchildren and recently, her first great-grandchild. She feels honored to be the first patient in the region to receive the Bonebridge implant, and she hopes to see many more have the same procedure in the future.

“Dr. Samy and his team have the experience and knowledge needed to do this,” Judy said. “Their expertise is worth seeking!”