Last June, at the age of 63, Tim Anderson traveled with four generations of his family to vacation at Cape San Blas, Florida. 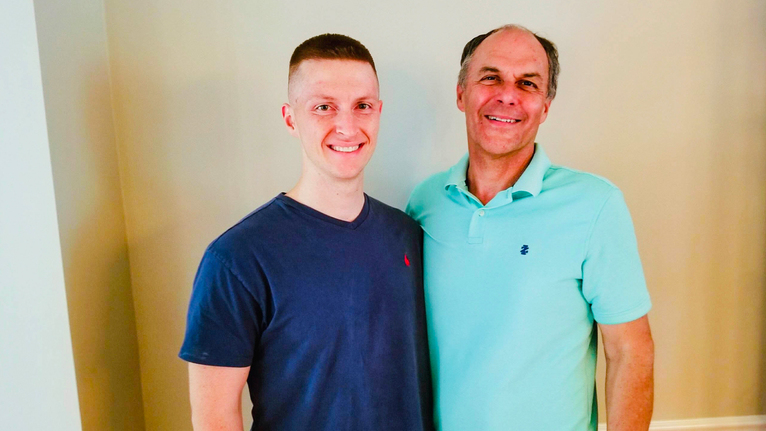 His family was preparing dinner at the beach house when he decided to go upstairs to take a nap. Moments later his wife, Jody, found him hanging on the edge of his bed and looking clammy.

It was not long before Tim collapsed. A whirlwind of events unfolded shortly after he fainted. His family called 911 and were told that it would take first responders 21 minutes to arrive—but he did not have 21 minutes.

Tim’s son-in-law, Chris Roberts, a UC Health pharmacist, began performing CPR as soon as he could after Tim passed out. Jennifer, Chris’s wife and Tim’s daughter, is also a pharmacist and was the only other person in the house who was medically trained.

However, Jennifer was so shaken that she was not sure she could keep performing chest compressions, so she assisted Chris as he performed CPR. Given that the family had to wait 20-plus minutes for first responders to arrive, a grim mood overcame everyone in the house.

Chris needed to consistently perform chest compressions, which took a toll on him. “About every 30 seconds or so, I would yell Tim’s name to hold on,” Chris said.

In total, Chris performed CPR for 23 minutes before first responders arrived. While Chris was successful in keeping Tim’s blood flowing, there were still several tense moments that followed. The closest hospital that had a cardiac catheterization lab—the Bay Medical Sacred Heart in Panama City—was an hour and fifteen minutes away. To make matters worse, there were thunderstorms in the area, so they could not transport Tim by helicopter.

Upon arriving at the hospital, Tim’s family learned that his “widow-maker” artery was 100% blocked. Seventy percent of his artery was blocked with plaque while blood clots had also formed. After the procedure to put stents into his blocked coronary arteries, Tim remained in critical condition in the hospital’s cardiac intensive care unit for another six days on a heart pump and a ventilator.

While Tim recovered in the hospital, the doctors continually reminded his family that he was fortunate to survive what he did. In fact, the doctors confirmed that the CPR was performed so well that it may have been the only reason Tim survived.

“I had no concept that CPR could be done that long and keep you alive,” Jody said.

LEARNING CPR CAN BE FREE AND EASY WITH UC HEALTH

Jody has since been encouraging everyone to take CPR classes because you never know when you may need to save a life.

UC Health offers a free, 10-minute CPR training program called TAKE10 Cincinnati led by Jason McMullan, MD, an emergency medicine physician at UC Health. This program is a grassroots effort that involves citizens, rescuers and doctors who teach compression-only CPR to help save lives, especially when you least expect it.

“Every minute that someone goes unaided [while having a cardiac arrest], their chance of survival goes down by 10%,” Dr. McMullan said. “Less than one-third of Cincinnatians receive bystander CPR, even though bystander CPR can triple the chance of surviving cardiac arrest. Take10 Cincinnati has trained more than 3,000 people in this simple, lifesaving intervention and can train any group, of any size, at almost any time for free.”

Tim appeared to have a clean bill of health: he raced his grandchildren on the beach the morning before his cardiac arrest. Thanks to Chris, Tim will continue to spend time with his grandchildren on future beach vacations. Tim’s family jokes with Chris now, saying he will get a lot of leeway with them at family get-togethers.

“What other choice do we have?” Jody said. “He saved my husband’s life.”