Growing up, Travis Hatch knew that the day may come when he would need a new heart. Most of his family deals with heart issues, including his mother, who had a heart transplant at University of Cincinnati Medical Center when he was 15 years old. 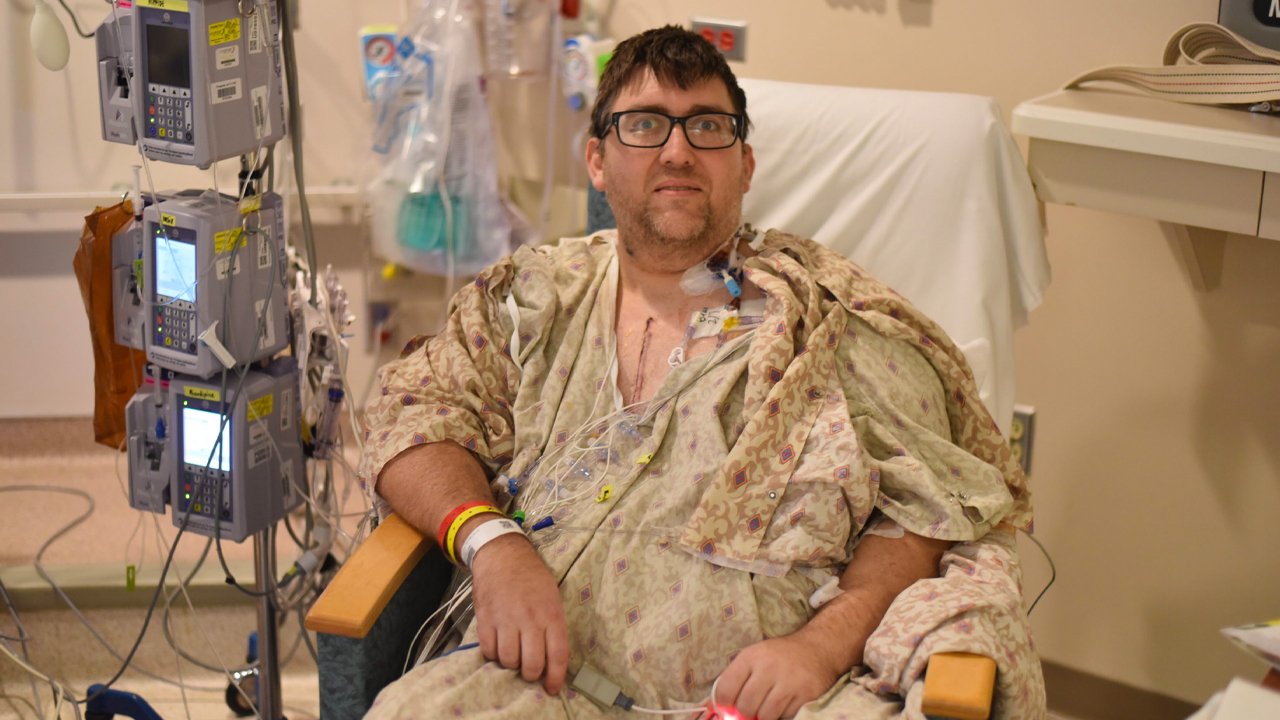 Still, he didn’t expect to need a heart transplant 24 years later at only 39.

It all started when Travis was 21. He went in for a doctor’s appointment for symptoms of what he thought were the flu or pneumonia. Instead, the young Lynchburg, Ohio, native was suffering from heart failure.

Travis was diagnosed with cardiomyopathy, a disease that affects the heart muscle and its ability to pump blood through the body. It can cause the heart to enlarge, thicken or soften and lead to irregular heartbeats or heart failure.

After being treated at another health system, Travis moved near Cincinnati to help take care of his mother. Like his mother and sister, he began treatment at UC Health. Because of his mother’s experience with her transplant, Travis knew he was in the right place.

“Everyone here is great, from the guy who brings you food, to the nurses and doctors,” Travis said. “If you come here and do what they ask, this will be the greatest family you’ll ever have.”

In Feb. 2017, Travis’ condition rapidly declined. His physicians told him that he’d need to get onto the National Transplant List. His condition changed so much that he had to stay in the hospital for four months.

“If we had let Travis go home (without further care), his heart wouldn’t have made it,” said Louis Benson Louis IV, MD, chief of cardiac surgery at UC Medical Center, home to the region’s only adult heart transplant program. “We placed him on a left ventricular assist device (LVAD) to restore his ability to live. But this was only going to be a temporary fix.”

Travis and his family were stunned at his sudden decline, especially since he wasn’t even 40 years old.

“It’s crazy how fast all that can change. I hadn’t changed my diet or my medications,” Travis said. “I went from feeling fine to needing a transplant so fast.”

UC Medical Center is the first hospital in the region to receive Advanced Disease-Specific Care Certification for VAD by the Joint Commission. Our cardiac surgeons are nationally recognized as leaders in cardiovascular care. And while the LVAD allowed Travis to leave UC Medical Center, he went home not knowing when he would receive the call letting him know a heart was ready for him. That was the worst part of the journey.

“You know you’ll get that call, but you don’t know when and if you’ll make it to that point,” Travis said. Early in the morning on Feb. 2, 2020, Travis received that call.

Travis and his family rushed over to UC Medical Center to prepare for his surgery. Although he was nervous, he was excited that this day finally arrived.

Travis received a heart transplant in the same hospital as his mother did 24 years earlier.

The following evening, Travis woke up with a new heart and a new outlook on life. He instantly noticed a difference and felt better than he had in years.

“It feels great. I’m so grateful to everyone who supported me. These people fought for me — every one of them,” Travis said.

“Our team worked tirelessly to find the right donor match for Travis,” said Vlad Cotarlan, MD, heart failure subspecialist in the UC Heart, Lung and Vascular Institute and associate professor of Internal Medicine at the UC College of Medicine. “Both Dr. Louis and I were confident that this heart was the one to save Travis’ life.”

Travis is the 30th recipient of a heart transplant at UC Health. Moving forward, he will need to work hard to fully recover, but feels confident knowing he has the support of friends, family and his care team to do so.

“If you listen to what they say, they’ll be able to take care of you. I’m proof of that,” Travis said.