Ground-Breaking Cancer Research is in Your Backyard 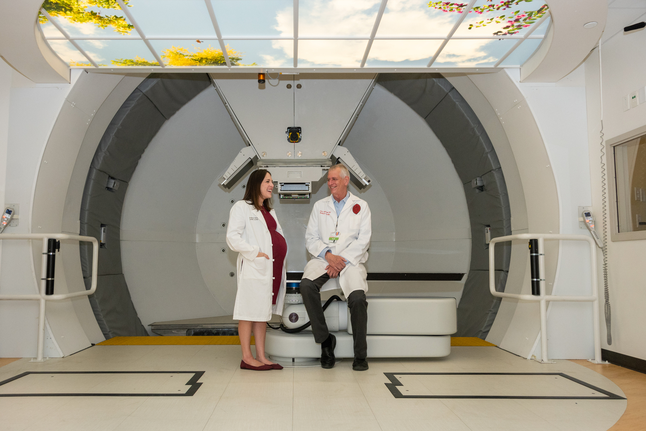 The Queen City is solidifying its position as a top leader in cancer research thanks to the University of Cincinnati Medical Center Proton Therapy Center located in Liberty Township, with the first FLASH proton therapy trial being completed in humans.

The FAST-01 Clinical Trial: All Eyes on UC Health

FAST-01 (FeAsibility Study of FLASH Radiotherapy for the Treatment of Symptomatic Bone Metastases) is the first human clinical trial of FLASH therapy—placing UC Health and Cincinnati Children’s at the forefront of this pioneering work.

What is FLASH Radiotherapy?

“We are the only health system conducting this trial in the world,” Dr. Daugherty says. “It is astounding and important for people to know that this ground-breaking work is happening right here in Cincinnati, right in their backyard.”

Launched in November 2020, the FAST-01 trial met its enrollment target of 10 participants with bone metastases in the extremities to evaluate clinical workflow feasibility and treatment-related side effects. Doctors confirm that this revolutionary treatment has been effective and continue to track patients enrolled in the trial to ensure that the effectiveness continues.

Dr. Breneman says the primary goal of the first trial period was to study the safety of the therapy in humans, with effectiveness of treatment as a secondary goal. Currently, Dr. Breneman and his team are working with the U.S. Food and Drug Administration (FDA) to prepare for the second trial–a follow-up study of the experimental treatment modality delivering radiation to different parts of the body. The first trial focused on delivering radiation to bone metastases in the arms and legs.

“The second trial is working its way through the regulatory agencies right now. And we hope to open the study in August or September,” Dr. Breneman says.

While the treatment modality is still in the experimental phase, it is possible the technology will be used routinely in patient care by 2027, adds Dr. Breneman. Researchers are able to perform this groundbreaking work in Cincinnati because of our Proton Therapy Center—the $24 million, one-of-a-kind research facility is a partnership among UC Health and Cincinnati Children’s Hospital Medical Center. It includes a fully operational proton treatment room dedicated exclusively for research along with integrated laboratories.

“We are conducting revolutionary research that is not being performed anywhere else in the world. And we hope to change lives,” Dr. Breneman says.

On May 28, 2021, the FDA granted Investigational New Drug (IND) approval to UC Health and Cincinnati Children’s Hospital Medical Center to proceed with a second clinical trial of FLASH therapy.

"We are thrilled to receive FDA approval to move forward with this second clinical trial of FLASH therapy," Dr. Breneman says. "It has the potential to become a routine part of cancer care, and we are excited to be at the forefront of this research." 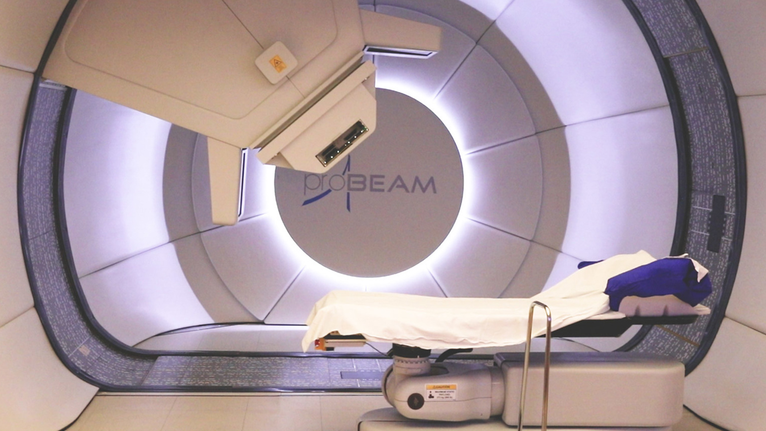 What Is Proton Therapy?

What Is a Proton?

A proton is a particle found within the nucleus of every atom. Protons have unique properties that make them very effective in treating patients with tumors. For example, they can be precisely controlled to match the location and shape of the tumor. They do not deliver the entire radiation dose all at once as they travel through the body. Instead, they enter the body at a very high speed, initially delivering low levels of radiation. As they travel, they slow down. When the protons hit the tumor, they deliver the maximum tumor-killing radiation dose, then completely stop. No radiation is delivered past the tumor site. This lowers the impact to normal tissues surrounding the tumor and reduces the risk of treatment-related side effects.

About 3,910 new cases of bone cancer are diagnosed annually, and bone cancer will result in 2,100 deaths each year, according to the American Cancer Society. This includes cancers in both children and adults.